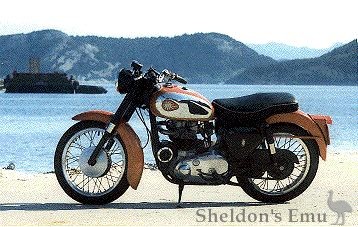 Tormod Eikill's 1961 BSA A10 Super Rocket was purchased in Hillswick, Shetland and brought to Norway in '93. The motor is as dead standard it can get.

The mudguards are new. The tank is rechromed and painted. The seat has new padding.

Tormod changed the electrics from 6 to 12 volts.

The longest trip Tormid had with it was from Stavanger, Norway, through England and to the Manx classic rallies. About 20 classics from Norway drove together: Commandoes, Bonnies, Super Rockets, Flashes, Shooting Stars, even a Gold Star and a Norton Manx.