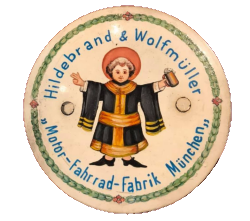 
A Brief History of the Marque

The Hildebrand brothers formed a partnership with Alois Wolfmuller, producing their first machines in 1894 with a water-cooled twin cylinder fourstroke engine of 1488cc. Drive was by connecting rods to the rear wheel. Built in Germany and France from 1894 to 1897, these were the world's first production motorcycles.

The designers are Alois Wolfmüller, aviation pioneer and Hans Geisenhof, mechanic. In the publisher, cyclist and engineer Heinrich Hildebrand, who after tests with a steam-powered two-wheeler, also developed the petrol engine, they found a financially strong fellow. Thus, in 1892 after preliminary tests, a two-cylinder unit was decided upon. Bicycle frames were unsuited to this engine so with its own chassis, the vehicle was patented in 1894 as a "two-wheeler with petroleum or gasoline engine drive".

At the same time, the designers for the first time created the term "motorbicycle." Optimistic in 1894, the founding of a factory for mass production.

The water-cooled engine powered the rear wheel directly, in the manner of a steam engine, and the rear mudguard served as a reservoir for evaporative cooling. A surface carburettor provided for mixture, the exhaust control was from the rear wheel, the inlet tract via a flutter valve. Adjustable rubber bands support the concentricity of the engine.

The pneumatic tyres were another first.

After initial sales success the number of complaints increased, especially about the then questionable hot-tube ignition system. In 1895, the company filed for bankruptcy, having sold several hundred machines.

Examples of the "Motorrad" exist in the Deutsches Zweirad Museum, Germany, the Science Museum in London, the Henry Ford Museum in Detroit, and the Tekniska museet Stockholm.

The First Motor Cycle in Australia

A motor cycle, which arrived in Brisbane nearly two months ago, and which, when exhibited in the window of the Austral Cycle Agency, Queen-street, created no end of excitement, has at last been given a trial on the Brisbane roads, and, no doubt, a slight description of this unique machine will be interesting.

The motor bicycle was specially imported from the Continent by Mr. J. C. Brunnich, of Mackay. When it arrived in Brisbane last month a trial of its powers could not be obtained owing to the fact that the benzol required to supply the motive power was not obtainable in Brisbane. However, Mr. Brunnich, when in Sydney a few weeks ago, obtained a small quantify of benzol, by which the present trial was enabled to take place. The motor cycle is the first of its kind ever imported into Australasia, and is a machine of the ordinary safety bicycle type, fitted with a motor driven by benzol.

The tank holding the benzol is capable of carrying about two gallons of the liquid, which is sufficient to drive the motor a distance of 200 miles. From the tank a small pipe leads to a lamp fitted nearly underneath the front part of the machine, in which are placed two nickel tubes kept at an incandescent heat by vapourised benzol. The exploding mixture, when discharged in one cylinder is admitted into the other, the explosion being made through compression of the mixture in the hollow nickel tubes referred to above, which are fitted in the base of the cylinders.

The valve gearing for regulating the admission of the mixture to the cylinders is worked by an eccentric. The cylinders are single-acting, of 3¼in. diameter anti 5½in. stroke, and when working at full capacity develop 3 horse-power. The exhaust gases from the cylinders are carried away by an ingenious method attached below them, thereby doing away with all smell, and conducing to the comfort of the rider.

Over the back wheel - the place for the usual mudguard - is fitted a water tank, or cooler, from which the water circulates round the cylinders, keeping them cool and preventing any possibility of overheating. This reservoir of water is necessary owing to the high speed at which the engines run. The water stored here has to he changed after running 100 miles. The driving or rear wheel is built of two steel plates on the disc principle, in place of spokes, thus being absolutely necessary to support the weight of the motor and rider. The driving wheel is 24in. and the steering wheel 30in. in diameter, the pistons working direct on to the driving wheel.

Benzol, as before stated, is the agent supplying the motive power - not benzine. Benzol and benzine are entirely different, and here it may be interesting to compare both products. Benzol is 80 specific gravity C6H6. 80c being its boiling point. Benzol is a by-product of coal tar. The benzine of commercial use is a hydrocarbon, of the formula CnH2n plus 2 and is a cheap by-product of kerosene, and similar in composition to gasoline. Benzine is quite unsuitable for motor use, and is also more volatile than benzol.

This benzol motor cycle has been ridden - or driven rather - by the owner, Mr. Brunnich, and two local cyclists (Messrs. H. K. Eaton and J. Adams), who have the honour of being the first to try the coming form of propulsion. The gentlemen named above have come to the conclusion that the motor cycle is a success, and that it will do all that is claimed for it. When ridden round the streets of the city, one of the riders mentioned, on a quiet level piece of running, estimated that the motor must have been travelling at the rate of thirty miles an hour.

Of course at such a high speed the vibration on the hands is very great - for the machine is steered like the ordinary safety bicycle - but when running at a moderate speed the vibration is no greater than that from the pedal-driven safety. In the trials round the city the horses met with on the roads did not take more notice of the novelty than that which an ordinary bicycle and rider claims. Only a slight noise is made by the motor by the discharge of the exhaust gases from the cylinders.

An ingenious contrivance attached to the handle-bar regulates the speed of the machine, which is also fitted with a powerful brake, and specially prepared pneumatic wheels, the tires being nearly ½ in. thick. The machine is dependent wholly upon its motive power for propulsion, and is not fitted with pedal gearing, which would be useless, owing to the weight of the machine - some 200lb. It is probable that a public exhibition of the machine's powers will be given at an early date in Brisbane. The motor cycle was made by Messrs. Hildebrand and Wolfmuller, of Munich.

If you have a information about these pioneer machines, please contact us