The Sanglas venture began in 1942 as Spain was rebuilding after the disastrous civil war which ended just as WWII began. Hitler had used Spain as a testing ground for his newly developed military might in much the same manner as a certain Russian gentleman who, much to the horror of those who read history, is flexing his muscles in Eastern Europe.

The brothers Martin and Javier Sanglas came from a long line of Catalan industrialists and were encouraged by their father to enter the motor trade, beginning with industrial engines under the brand name Vellino. The company name was Talleres Sanglas with offices and workshops in San Martin del Palomar in Pueblo Nuevo, Barcelona, a newly created industrial centre.

They displayed their first motorcycle at the 1945 Barcelona Show, a Sanglas 350. Although unfinished (it reportedly had no tyres) it showed great promise - the machine was based on the best of Britain and Germany, with a top end similar to that of the AJS on a unit construction bottom end resembling a DKW, housed in a chassis using ideas from BMW and BSA.

In the late 50s Sanglas sold considerable quantities to the Spanish police and military, and exported motorcycles in military trim to a number of South American countries from the early 1960s on.

Towards the end of the 1970s they formed a partnership with Yamaha, adding a 392cc Yamaha twin to the range. 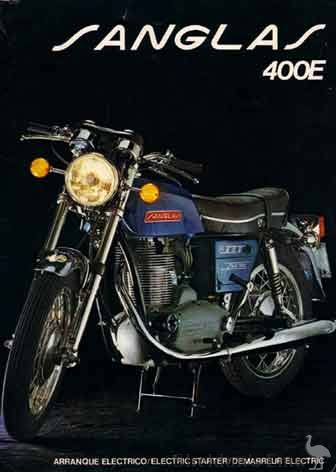 Sanglas motorcycles were imported into Ireland in the early 1970's for use by the Army.

Two models were used, the 400 "militario" ( very similar to 400T) and a slightly later model , the 400E "electrico" with electric starter. Apart from the starter and engine oil system, the main difference between the models was in the front forks and instrument layout. The side panels below the seat were more "square" to accommodate the larger battery on the starter model. The models were superficially similar, finished in army green with large handlebar faring and leg shields in fiberglass.

The main difference with the engines was that the 400 used a dry-sump oil system with oil tank under the seat while the 400E was a wet-sump with the engine oil shared with the gearbox ( Guzzi Falcone style). The 400 used pressed steel rocker-box covers while the 400E had aluminium castings. Other details ,such as slightly different engine side covers to accommodate the starter , separate the two models but the engines are very alike and many parts are interchangeable.

The Army eventually auctioned off the Sanglas bikes and for a while in the late '70's they were a marginally popular "budget" machine on Irish roads. However, as spares dried up they ended up being scrapped. Unless owners had the means to actually make bits they couldn't be kept running.

Opinions vary greatly about Sanglas bikes, one gets the impression that they were not a popular machine in the Army. At a time when the Jap factories were making the early sporty four cylinder models this is probably understandable. They compare well enough with older singles like British bikes, a 400 is livelier than a BSA B31 or G3L Matchless for instance , a tidy 400 will do 80mph+ ( genuine, I don't believe 90 no matter how loud it is). The electric starter was not considered to be any good by anybody. Even the factory fitted a kickstarter with it. There was always a suspicion that the starter pinion wore swarf off the crankshaft flywheel which then got into the engine oil. Anyway, I've never seen one working.

There seems to be some interest in Spain (finally) in restoring these bikes . I heard about owners groups on the continent in the past but never managed to find a source of spares. Maybe this will improve if some owners communicate more.

I hope this is of interest to someone .

Mon Oct 08 2007
Ldoughton2001 at yahoodot com
Sanglas Repair Manual
1974 Sanglas Electro 400 single
Hi,
I am desperately looking for a repair manual of any type for my sanglas 400. Any information would be greatly appreciated as these bikes seems to have been forgotten and all information cast away.
Please email if you can help. Thanx Lenny
Ireland, Wicklow Town

Mon Mar 20 2006
bohacs at supanet dot com
s2v5 spares
where can i obtain spares from in england.
the bike is a Sanglas s2v5 500cc single.
alex
alylesbury

Sat Jan 28 2006
thegordons at cheldoc.fsnet.co.uk
Villiers twins
Hi there!
I have found another bike manufacturer that used the Villiers twin units in the sixties, Spanish Sanglas!....Have a look.

September 17, 2002
James
I have purchased, unseen as yet, a Sanglas 400. I have been told by the vendor that the engine is a Yamaha XS400 twin so presumably a local Yamaha dealer could assist. That is assuming, in my as yet blissful, ignorance that all the late 400s had the same engine. I shall advise more fully when I collect the machine.

Frank Westworth, editor of Clasic Bike Guide, has a Sanglas. He is very approachable.

January 24, 2002
We would like to notify that we've just created the "Club Sanglas Catalunya"...
See Spanish Motorcycle Forum

October 4, 2001
I have just started the complete restoration of a Sanglas 400, these bikes were brought into Ireland for the army...
See Spanish Motorcycle Forum

June 22, 2000
Sanglas
The only four-stroke Spanish motorcycles of the 60s and 70s...
See Spanish Motorcycle Forum

February 9, 2000
Please find enclosed two pictures of my Sanglas 400 T, before and after restoration.

I am looking for information and pictures of Motobic.
Bye
Miguel Cuenca Drouhard

December 4, 1999
There's not much information on Sanglas motorcycles on the net that I can find. If you find it interesting, I have some info at members.aol.com/greglond/sanglas.htm [404] and the national motorcycle museum have some pages, look at tower.org/museum/sanglas/sanglas.html [404]

Hope this is of some interest, contact me on greglond at aol dot com if you want any more info. -- Greg