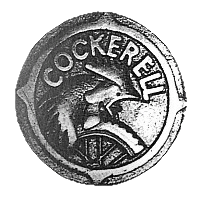 Fritz Cockerell (whose name was actually Friedrich Gockerell - he's the 'go' in Megola - Meixner, Gockerell, Landgraf) began his career as an airship machinist and went on to manage the Megola workshops. Subsequently he developed a variety of designs including an eight cylinder two-stroke, and later worked on diesels and Wankel engines.

Cockerell motorcycles included two-stroke horizontal singles of 110cc to 170cc, some of which were watercooled, and a prototype watercooled four-cylinder inline twostroke of 745ccc in 1927. His machines won the 150cc class German Championship in 1924.

After WWII he was involved in the development of other small engines that were later used at Rex in Munich.

Dear Sirs
Is it possible to identify this Cockerell body. It is numbered with 227 underneath the saddle, left side, up-down tube at welding joint and rear part with number 226 at left side axle mounting plate.

Thank sfor your fast reply.
Searched through internet and found it is not the Cockerell with 110 ccm engine.
That one is with A-shaped front body.

Found it might not be the one with 169,5 ccm engine. That one has the straight gearlever to the gearbox.

This one has a stand for gear lever on top of fueltank, on frametubing. Added a detail photo.

But watercooled or aircooler? That one is another question.

Many thanks in prehand of your co-operation.

June 23, 2002
Hello,
Seeking information on the Cockerell Motorcycle. Is there any documentation that can be obtained that may show pictures and specs? I am a collector of Cockerel and it's variant spelling interesting articles, books and other collectibles. I would appreciate your help. -- Tom Cockerel  -- kytrace at worldnet.att.net