Some Gruesome Relics of Bygone Days seen by the Motor Cyclist on Tour.

I WANTS to make yer flesh creep," like the Fat Boy in "Pickwick," but I realise fully that this is nowadays a difficult enterprise. Now that no one believes in ghosts - or, believing, would be impudent to one when it appeared, rather than afraid - and now that the horrors of war are done with, and we have come down from those high eminences of feeling, one's flesh refuses that symptom of fear and dread.

But I will do my best - no man can achieve more - and I propose to talk about gibbets. " Thank God, I have come back to a civilised country ! " exclaimed the returned traveller long ago, when, coming back to England, home, and beauty, he perceived those evidences of an ordered and advanced state of society, the gibbets, on which hung the rotting bodies of executed highwaymen and other criminals. We have, in fact, a number of such objects, the gibbets, still in existence as relics in various parts of the country, but they have long ceased to bear their ancient fruit; and, indeed, the last instance of a person being hanged and his body afterwards exhibited in this way, as a warning to others, took place nearly a century ago, when the body of a murderer named Cook , was gibbeted at Leicester in 1832.

One of our most authentic original gibbet-posts, which is not now at its olden full height, may be found in a lonely by-road between Atherstone and Gopsall. It is well known locally as "Gopsall Gibbet," and the road itself is "Gibbet Lane." A board nailed to this relic says: "This gibbet was erected here in 1800, a quarter-mile from the scene of a murder committed by John Massey, February, 1800." I would like to know the details of that crime, but, although I have long sought, they elude my research.

The motor cyclist who finds these horrific wayside vestiges of the past very probably considers that such things were few. On the contrary, they were once common objects of the country; and if some people, who like quiet roads and contemplative, absent-minded walks in the middle of them, had their way, there might be a reappearance of them, and the motor cyclists themselves would dangle in chains and in iron cages just as the old criminals did. The practice was to suspend the body by chains, and in a neatly fitting iron framework, so that when the clothes rotted, and the body likewise, the skeleton might be held together. In the best regulated and most thoroughgoing circles, the body, clothes and all, was plentifully tarred on being hung up, so that it might last a very long time. And, lest relations might come and cut it down and bury it, the gibbet-post was usually studded with hundreds of nails and sharp spikes as a deterrent to climbing it. 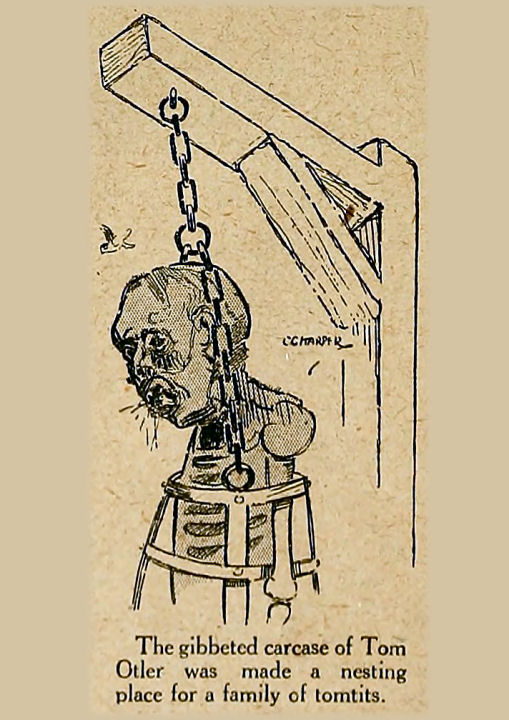 The Gibbeted carcase of Tom Otler was made a nesting place for a family of tomtits.

As my intention is to give you the horrors, I cannot do better than talk about Tom Otler, and show a picture of what happened to his gibbeted carcase. Tom Otler, in the year 1808, murdered a woman in the lane still well known locally as "Gibbet Lane," Saxilby, in Lincolnshire. He was hanged at Lincoln Gaol, and his body was, following the olcL custom, gibbeted at the place of the crime. As time went on, some tomtits, seeking a likely place to build a nest, selected the gaping mouth of hanged and gibbeted Tom Otler, and in the nest thus built in this unconventional situation they reared seven young ones. The occurrence was so well known a local curiosity that it gave rise to a puzzle verse:

"What were they?" the stranger would be asked. And when he "gave it up," he was told, "The tomtits whose nest was in Tommy Otler's head." The irons from this gibbet are still preserved at Doddington Hall, Lincolnshire. 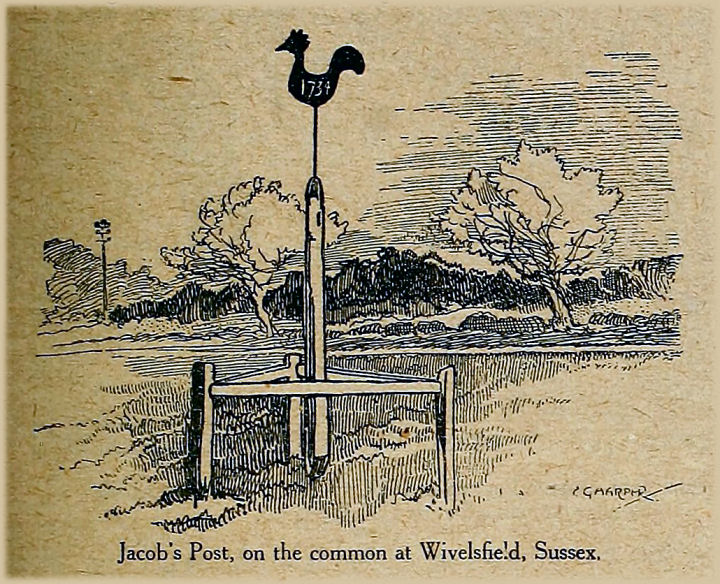 An old gibbet, which may well compare with that at Gopsall, is "Jacob's Post," as it is called, on the wide common at Wivelsfield, between that village and Ditchling, in Sussex. It is the post on which was suspended the body of one Jacob Harris, a Jew pedlar, who in 1734 murdered two persons at the Royal Oak Inn, close by. The fragment of it now remaining is crested with the figure of a rooster (not a weathercock, because it is a fixture, and won't go round) pierced with the date. 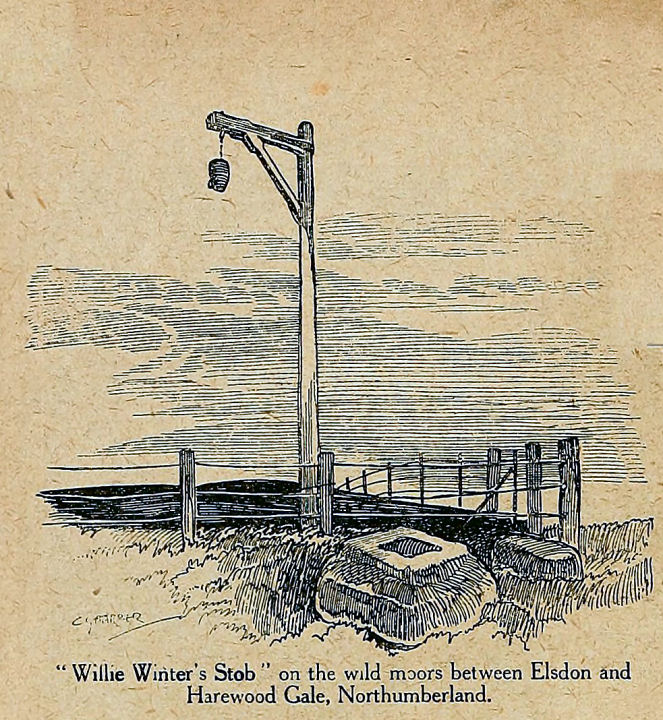 "Willie Winter's Stob" on the wild moors between Elsdon and Harewood Gale, Northumberland.

Turning again to the north, we find, on the wild moors between Elsdon and Harewood Gale, Northumberland, three miles north of Elsdon, a restoration of the gibbet on which was exposed the body of William Winter, who in 1791 murdered an old woman, Margaret Crozier, who kept a small drapery shop, and was supposed to have plenty of money by her. Winter, with the aid of two pedlar women, Jane and Eleanor Clark, broke into the house and did the deed. All three were hanged at Newcastle-on-Tyne, and Winter's body swung here in the winds of this desolate spot in sight of the victim's abode, at the place called "The Raw," by the road leading to Scot's Gap. The existing post, styled "Willie Winter's Stob" - "stob" means "gallows" in the Northern dialects - has a wooden head hanging from it. Sir Walter Trevelyan caused the new post to be set up.

It is noteworthy that this cruel murder was brought home to the criminals, as so often, by what seemed a trivial incident. Winter and his companions were of a vagrant company of besom-makers. On the day before the murder, one Robert Hindmarsh, a shepherd boy, had idly amused himself by counting the hobnails in the boots Winter was wearing, and noting their peculiar pattern, as he sat cutting sticks and making besoms. When footprints were discovered near the old woman's cottage, he mentioned this fact, and his evidence secured the conviction. When Winter's body, after some years, fell, a hideous effigy was made to take its place, and, that falling, a Moor's head was made and exhibited. Elsdon will not willingly forget that old tragedy.

"Mr. Breeds's Irons," which stand on a dark staircase in Rye Town Hall

What those cages were like which held gibbeted bodies we can see by the well-preserved specimen kept in Rye Town Hall. John Breeds, a butcher, was in 1742 hanged for murdering a Mr. Lamb. The crime was one of revenge. Unfortunately, Mr. Lamb was not the person whom Breeds had intended to kill. He mistook his victim for the real man, who had, therefore, the extreme satisfaction of seeing Breeds hanged, with his revenge not satisfied. There seem to be several morals to this story: the usual conventional ones, and another, which is, "Don't, if possibly you can help it, resemble anyone else. "Mr. Breeds's irons," as they are called, stand on a dark staircase, and give strangers the jumps.

I will conclude with a notice of the spot called "Three Maids' Cross," a tall wooden cross in the hedge on the right-hand side of the road as you go from Winchester to Ludgershall, five miles from Winchester. The legend, which gives no date to the occurrence, tells us that three sisters were buried here, up to their necks, for poisoning their father, and so left to die of starvation. It was just one of those picturesque punishments in which the Middle Ages were so fruitful: not, like the punishment in the "Mikado," " humorous and lingering," but lingering without the humour.