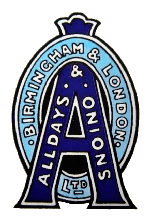 
Alldays & Onions built motorcycles in Sparkbrook, England from 1903 to 1915. Models included the Villiers-powered Alldays Matchless (no relation). After 1915 they moved to a new factory in Small Heath and marketed under the Allon brand up until 1927. Allon models included a 539cc JAP V-Twin model.

The Alldays name dates back to the 17th century, and the firm merged with JC Onions in 1885 to build all manner of machinery including numerous bicycles and tricycles, and branched into automobiles in the early 1900s. During WWI they built mostly motorcycles, returning to cars on cessation of hostilities. The company changed its name to Alldays Peacock which was acquired by the Spire Group in the 1980s.

Report from the 1903 Stanley Show

Messrs. Alldays and Onions will have an interesting exhibit of their new pattern motorcycles and fore-carriages at Stand 95, Stanley Show. They are also showing their latest pattern "Traveller Voiturette." The motor-bicycle is made throughout by Messrs. Alldays and Onions, and all parts are interchangeable. The frame is designed with a special cradle (registered) for carrying the motor in an upright position. Lugs are provided on the crank case which correspond with faces on the cradle, and are securely held by four bolts. This invention affords great strength to the frame and rigidity of the motor, and obviates the necessity of clamping to or bending tubes. The tank has compartments for two accumulators, coil, lubricating oil, and sufficient petrol for 160 miles. A float register is provided and always visible for showing the quantity of petrol in the tank. The weight of the machine complete does not exceed 110lbs.

The machines fitted with fore-carriages are strongly built, and a specially designed frame is constructed for carrying a well-finished and smartly upholstered bucket seat. The "Traveller Voiturette" is one that particularly appeals to the man of moderate means.

This firm have an extremely well-designed 3 H.P. motor-bicycle, up-to-date in every respect. The valves are mechanically-operated, and the engine is provided with a ball bearing crank shaft. The magneto is driven by an enclosed non-stretchable chain. The engine is free, the clutch and two-speed gear being in the hub of the driving wheel. The belt pulley is adjustable so that the correct tension can be maintained on the belt without the risk of unduly straining the bearings. The frame is low, and spring forks are provided. Ample petrol and oil tanks are fitted, a great point from the tourist's point of view. The machine is a very quick starter and the "pick up" on either gear is gentle. It will be noticed that the firm only manufacture this one size of engine, so that all the attention in the countless details that go to make up a perfect design has been bestowed upon the one model - a fact which we think the purchaser will appreciate.

Sat Nov 13 2010
pthornbrooke5<at>talktalk.net
value
alldays allon
what is the general value of a 1910 allon missing lights, not running(no spark) but in general good condition.
ni
The page on Vintage Motorcycle Values may prove helpful.

Fri Mar 26 2010
w.grattan<at>hotmail.co.uk
magneto for Alldays allon
alldays and onions allon
i think it was EIC mag that was fitted from 1914 - . Maybe Baby Fellowes 1913. Hope this helps. please send me photos of your bike. thanks
lancashire

Tue Feb 16 2010
motosdhier at yahoo.fr
What make was the original magneto ?
ALLDAYS ALLON 3HP 2 strokes 1919
Re engine TSA 2023, what make and type of magneto should be used as original please ?
PARIS
.......
We do hope this period document can be useful. Thanks a lot for your kind help
Regards
Pierre Martin
Editor in chief
MOTOS d'hier
(France)

Tue Apr 17 2007
w.grattan at ntlworld dot com
alldays & onions
allon
Hi there, can you tell me the colour scheme of the petrol tank?
UK

Sun Sep 24 2006
hjvinning< at >hotmail dot com
Oil leak
Alldays Allon 1920
I have an oil leak at back of the drive pulley wheel, after removing pulley wheel I find there is no felt or rubber washer should one be there?
Jersey, CI