They’ve been trying to destroy us for 50 days, but the UA people are heroically resisting. We fear nothing, we know what we’re fighting for. We are brave enough to put an end to evil. Stop feeding the RU military machine. Help UA with weapons. Then peace & good will win faster. pic.twitter.com/WdDbZsvZ4e

The lightest engine for its power yet constructed for a motor bicycle. The carburetter fitted is a Claudel
The 20 h.p. flve-cylindered Esnault-Pelterie engine fitted to a pacing machine. The total weight is 330 lbs. 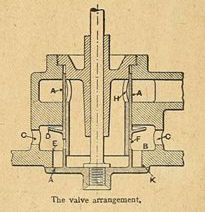 ON January 15th there appeared in The Motor Cycle, page 56, sectional line drawings of the lightest petrol engine for its power which has ever been constructed. The name of this engine, as readers may remember, is the Esnault-Pelterie, designed and built in ' France for aerial navigation. The engine has several very distinguishing and clever features, principal among which may be mentioned the method of attaching the connecting rods to the crankshaft. The valves are situated in the top of the combustion head, and the inlet and exhaust valves are combined.

We reproduce herewith an illustration in section of the valve arrangement, as without it would be difficult to understand the method of operating the valves and distributing the inlet and exhaust gases. The line drawing shows the exhaust slide valve A seated. When the slide valve A is opened towards the end of the working stroke, it leaves a free passage for the exhaust gases to escape through the holes B and C directly into the atmosphere. At the end of the exhaust stroke the slide valve A, instead of closing, opens still further, causing the collar D to come to rest against the corner of the angle E, so that air cannot enter via C and B. When the collar D is at rest, the inlet holes F are open, and there is direct communication between the carburetter and the cylinder via the holes H and F. The only practical difference between the seven-cylindered engine constructed for propelling an aeroplane and the five-cylindered motor bicycle engine which is the subject of the present article is the number of cylinders The bicycle engine, as will be seen from the accompanying illustrations, has five cylinders staggered round the crank chamber in the same way as the seven-cylindered engine.

One carburetter serves the whole five cylinders, whereas in the seven-cylindered engine there is one carburetter for each group of cylinders. It will be noticed that the designer of the motor bicycle has cleverly utilised the space occupied by the crank case, and has dished a large flat-faced engine pulley over it. The back belt rim is of wood with wooden arms, and should allow the flat belt to obtain a good grip of the pulley face. The weight of the engine is 60 lbs only, length of wheelbase 3ft. 5in., diameter of front wheel 28in., rear wheel 3oin. The Ignition is by plain coil and make and break contact, and the distributor is the larger of the two cases seen on the side of the crank case in the top picture.

The machine is, of course, intended for pacing purposes, and with its aid a French cyclist (Gombault, paced by Coutant) hopes to beat the record by covering 100 kilometres within the hour.

In the history of motorcycling, few have a crater on the moon named after them. Robert was an extremely talented man with a great legacy - the joystick used to control aeroplanes, the use of the aileron (pre-dating the Wright Brothers), and the ballistic missile are among his many inventions.