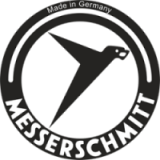 Three wheelers were built from c 1950 to 1962 by Fritz Fend, an engineer at the Messerschmitt aircraft factory during WWII. It was conceived as cheap, weatherproof transport during the years of Germany's recovery. Early versions were powered by a 175cc Fichtel & Sachs two stroke motorcycle engine and were capable of carrying two adults and a small child in relative comfort at speeds of up to 75kph.

Fend subsequently built a four-wheel version with a modified F&S 500cc two-stroke twin named the Tiger, to which Krupp objected on the grounds that they owned the name along, reportedly, with a great many other animal names. The rather lovely little vehicle was renamed the Tgr, but of course everyone called it the Tiger. It is not reported what they called Krupp.

The nickname for the Kabinenroller and the Isetta was "Schlaglochsuchgerät" (pothole detector).

Mon Oct 15 2007
nikgnz at hotmaildot com
misserschmitt-1
KR 200 1955
we have for sale if u are interested, it has just been restored
Australia

Mon Aug 27 2007
mbk at cogeco.ca
messerschmit car 1950,s
I am looking to buy a Messerschmit Car circa 1950,s thanks Malcolm
Toronto.Canada

Wed Oct 11 2006
ron at silentmusic.net
messerschmitt - want to buy
Hi, I am looking to buy either a restored or a project messerschmitt, do you know of any for sale?
Many thanks, Ron
london


If you have a query about Messerschmitt Microcars, or wish to share some information about these classic German machines, please contact us