Ward was a firm that produced motorcycles between 1915 and 1916.

For a short time during World War I, the company produced a lightweight machine powered by a 293cc two-stroke engine.

Civilian sales were halted in 1916, and they then turned their attention to war work. 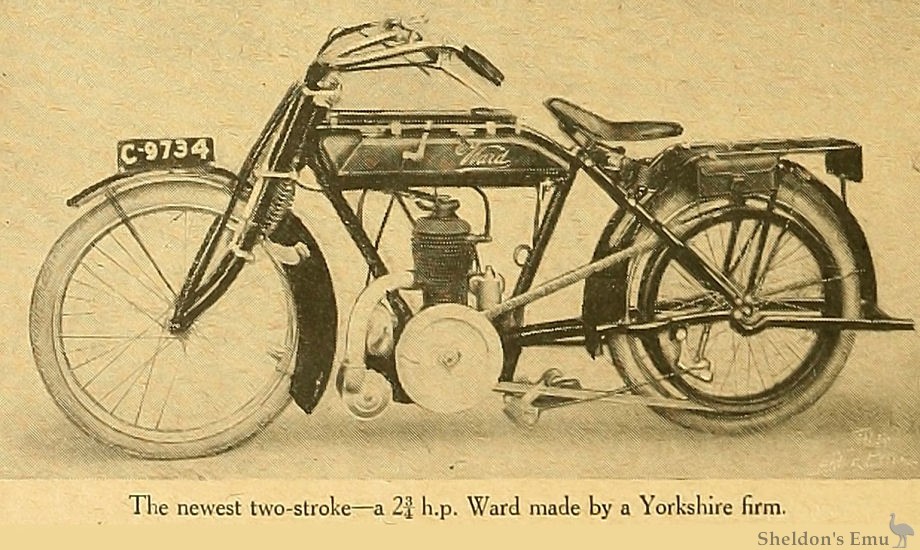 ONE of the latest additions to the already long list of two-stroke light-weights is the Ward, which is manufactured by Messrs. William Ward and Sons, motor engineers, Wetherby. This machine, though low in price, is substantially built ; it is fitted with a 2¾ h.p. engine, and a large exhaust pipe and silencer. The gas is supplied by a Senspray or Amac carburetter and ignited by an E.I.C. magneto of British manufacture. Druid girder forks are fitted, the wheels are 24in., and the tyres 2in. in section ; these latter may be Clincher, Kempshall, or Avon. The lubrication is on the semi-automatic system, which the makers prefer to petroil, a Best and Lloyd drip feed pump being employed. The rear brake is applied to the belt rim by the left heel.

The machine is enamelled in black with gold lines, which gives an excellent appearance. A Lycett saddle is fitted, and a Lyco ¾in. belt. The riding position is low, being about 28in. from the ground, and the weight of the machine is 120 lb. The bottom bracket is so constructed that it can carry a gear box without alteration ; for this an extra charge of six guineas is made. Two armoured toolbags are attached to the carrier, one on either side, and the handle-bars may be of touring or semi-T.T. pattern.

It is hoped shortly to turn out these machines in considerable quantities.