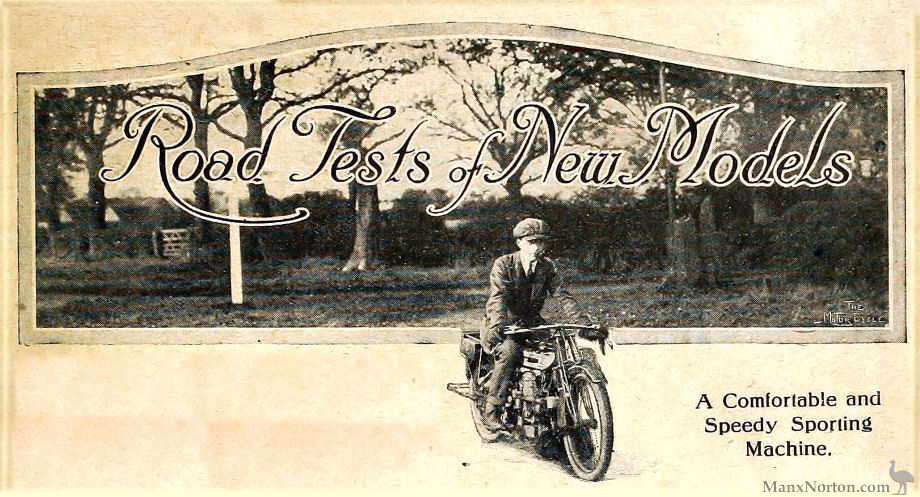 Road Tests of New Models.
Autumn leaves are not an ideal road surface; however, the Brough is very steady on most varieties of slime. A cross-roads direction query.

Diagram of front brakes of the internal expanding variety built up in the hubs of 1921 Broughs.

Typically sporting lines are not sacrificed, although the mudguarding is of "all weather" dimensions. The sharply dropped handle-bars were found to be most comfortable.

Showing the neat cover for the overhead valve rockers, which are internally lubricated through hollow operating rods.

A Comfortable and Speedy Sporting Machine.

For nearly ten years Messrs. W. E. Brough have produced flat twins with a distinctly sporting flavour; and the machine that we recently rode away from Nottingham bears evidence of this in every line. Although not identical in every respect with their 1921 model, the main features are the same. It is an entirely new design, and has a 496 c.c. flat twin engine with overhead valves and detachable cylinder heads. A speed I of 60 m.p.h. is guaranteed, which, for a three-speed countershaft machine with touring equipment, is an excellent figure.

Not on our test mount, but included in the final design is a large internal-expanding Ferodo-lined front brake, also a special Amac carburetter that bolts directly on to the timing cover, which contains the cored gas passages.

We may now mention our only difficulty with this particular mount. Until we learned to get the engine really "revving" in second gear before engaging the rather high top ratio, we found a slight but distinct tendency to "pull-up" when accelerating. The deeper float chamber and shorter manifold of the new carburetter, however, should remedy this. And, even so, the get-away, after short experience, is as rapid as any who consider their tyres could desire.

Speeds that are Deceptive.

Once under way the speed, on account of the remarkable degree of comfort, becomes deceptive, and only with streaming eyes and a "scraped" corner comes the realisation that we have been doing forty-five on a road where we had previously never exceeded thirty-five. It must not be inferred from this bit of lurid corner work that the steering is difficult. Naturally, an outsize in wheelbases makes the Brough a different proposition from the usual T.T. machine to pilot round a "hair-pin"; but, again, experienca docet, and, having learned - well, the cycle almost steers itself.

That notorious "snag" of the flat twin, difficulty of lubrication, appears to have been very effectively overcome. We set the automatic feed at an extravagant opening, and, although on one memorable night ride, lost among strange and slimy byways, we covered more than ten miles in second gear, with a following wind, that every now and then obscured our path with dense exhaust smoke, we never had occasion to remove a plug.

Specially pleasing to the critical ear is the exhaust note, well silenced, but with just that hint of a "crackle" that indicates latent power awaiting a favourable opportunity of making itself felt. Indeed, the machine "feels" like a big twin in its general proportions; a "long" engine and tank of large size make it difficult to believe that the capacity of the power unit is but that of a 3½ h.p. single and there was nothing in the Brough's performance that tended to emphasise the limitations expected of the 500 c.c. engine.

Mudguarding for a sporting type of mount is unusually complete, a large flap at the lower end of the front guard proving most effective without, on account of its diagonal setting and flexible construction, materially affecting wind resistance.

The rear guard, too, proved an excellent protection on some very muddy journeys. A simple shield serves to protect the rear chain, but the primary drive is enclosed in a large aluminium cover. Both are quickly detachable.

The exposed position of the valves keeps them efficiently cooled, and their lubrication is effected through hollow operating rods.

Thus a specification essentially intended for speed actually combines the reliability and strength of a hefty single with the smoothness and comfort of a spring frame twin. And how it attains this latter end Without any form of frame springing presents a nice little problem for the theorists. Several factors contribute - the even torque of a well-balanced engine, a silky cush drive, a long wheelbase, large tyres (kept fairly soft), a comfortable riding position in conjunction with an excellent saddle (Brooks B 170) are, probably in the order we have given them, chiefly responsible.

But theorising, fortunately, does not alter the fact that the latest Brough is comfortable. It is that rare type of machine that on account of its diverse qualities should appeal alike to clubman and tourist.

The overhead valve mechanism of the Brough is protected by a neat cover.

On the Brough stand there is the overhead valve 3½ h.p. and the large 5 h.p. model G. Both machines are designed on very pleasing lines, so that they not only have a smart appearance, but also are essentially workmanlike, and a sound mechanical job - a point which is not without considerable value in the eyes of the possible purchaser.

The 5 h.p. flat twin engine has the two cylinders considerably staggered, and carried rather higher than is usual. On the 5 h.p. model there are a number of fairly thick fins, especially around the valve ports, which are placed on the upper side of the engine. The valves are above and horizontal, in which position they are accessible - the adjustment and tappet gear particularly so. From the ports short pipes are cast with the cylinders, and curve away to the main exhaust pipe below the engine. Either aluminium or steel pistons are optional, according to the work to which the purchaser desires to put the machine, but both are fitted with two piston rings at the top and a single keeper ring to secure the gudgeon pin from endwise movement.

An interesting point in the design is the aluminium inlet pipe, which is secured by a C spanner nut to the valve port at the outer end, but is socketed in a special packing washer at the crank case end, allowing for differences in expansion. The second model is a modification of the well-known 3½ h.p., which differs from its larger brother, in that there are fewer fins on the cylinder head, and that the valves are in the head itself, and are operated by rocking levers and long push rods, a small aluminium coverplate protecting the mechanism for each.

A part of the inlet pipe is cast in the crank case, but the mixture is conducted to the ports by a pipe constructed on the same lines as that on the 5 h.p. The engine has a bore of 70 mm. and a stroke of 64 mm., giving a cubical capacity of 495 c.c. The remainder of the specification follows that of the 5 h.p.