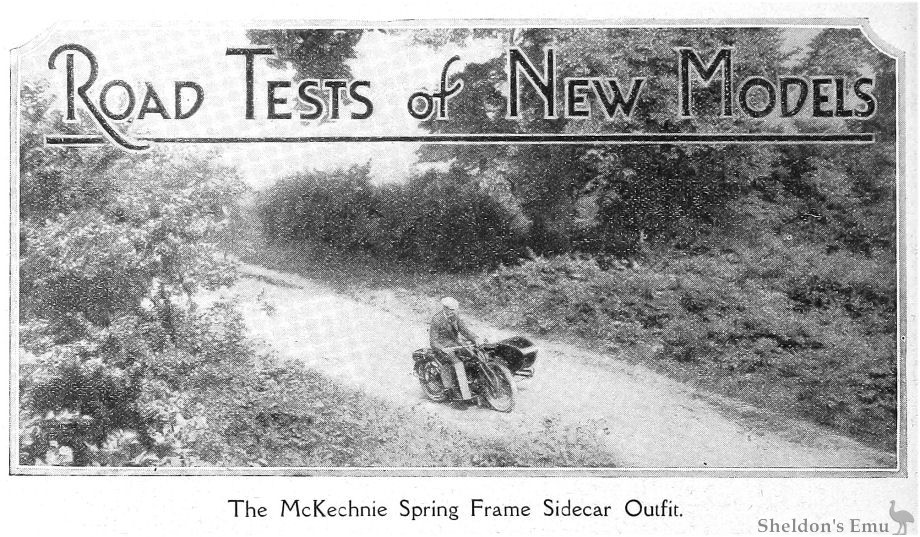 An outfit on which bad roads can be negotiated in comfort, the 688 c.c. McKechnie

Rider, tank, engine and gears are completely insulated from direct road shocks by the McKechnie system of springing. The near leg shield has been removed to show the frame lay-out.

A DESCRIPTION of the McKechnie spring-frame has already appeared in the pages of this paper, and, as considerable interest has been evinced by the public in its unorthodox design, it is only necessary to recapitulate the salient features of the frame.

It will be remembered that the head lug is attached rigidly to the rear fork, ends by. two tubes on each side; between these duplex members lies a unit composed of the engine, gear box, tank, footboards, saddle, etc. This assembly, in a subsidiary frame, is suspended by a leaf spring reaching from the head lug to the carrier, and pivoted torque tubes connect the gear box bracket to the back axle.

In addition to the large range of action provided by the long spring, the designer has not fallen into the error of fitting a small saddle and tyres, for comfort is improved by a Terry spring saddle and 28x3in. tyres; front suspension is provided by a Montgomery fork.

On the occasion of, our test we were offered either a solo or sidecar machine, but, having previously tried out a solo model over a course which included ridged and furrowed fields, we were anxious to test the machine under the most disadvantageous circumstances - that is, with a sidecar attached and over bad roads.

On taking over the machine we found that it was equipped with aluminium leg screens which extended the full length of the engine and acted also as air scoops directing the main current of air over the cylinders. These screens proved most practical in service, keeping the rider absolutely clean, though naturally they are inclined to accentuate mechanical noises to some degree. The Coventry-Victor engine is not fitted with an exhaust lifter mechanism, and just at first one notices the lack of this fitting when starting. However, after a few experiments it is quite easy to swing the engine over compression by the kick-starter.

Having once started the engine we took the road with the idea of searching out pot-holes. Such a search is not difficult even in these days, and within a few miles of Coventry we knew of a long stretch of rough road which served its purpose admirably. No attempt at avoiding bumps was made; rather were they sought out, and the machine was driven at speeds varying from a crawl to approximately double the legal limit over all surfaces. On no occasion was shock felt; the rider has the curious sensation of floating, though the wheels and main frame appear: to be thrown about over bad roads in the normal manner.

As is the case with many spring frame designs, the machine is at its worst at low speeds, but this "worst" is such an improvement on the jarring of a rigid frame that one cannot help feeling surprised at the lack of discomfort. The fact that the wheels are attached to a rigid frame eliminates the possibility of side play - a trouble which is too often in evidence in more usual designs.

With regard to the running of the engine and transmission, we were well satisfied with the pulling powers of the Coventry-Victor engine, while the four-speed Jardine gear provides a very convenient range of ratios. The fourth ratio permits the top gear to be somewhat higher than is usual for medium-sized engines so heavily laden; nevertheless, on the 4.7 to 1 ratio, the machine is quite capable of carrying its rider and passenger up normal main road hills; third speed is handy for the easier single-figure gradients, while second is usually used for starting purposes and really bad hills. This leaves first as an emergency gear which need never be used in ordinary circumstances.

Fitted with a Cox carburetter, the engine ran perfectly throughout our test, being very flexible and capable of pulling well at quite low speeds. A Showell mechanical pump relieves the rider of all anxiety with regard to lubrication. Our passenger testified to the comfort of the Millford sidecar, the chassis of which is rigidly constructed and stoutly attached to the main frame.

The only slight criticisms which we have to put forward are that the foot brake is not too conveniently arranged nor too powerful in action, and that the swish of the driving chains that is usual without side flywheels was slightly accentuated by the metal leg screens; this point, however, is having the attention of the manufacturers, and it is probable that in the near future it will be largely eliminated by the substitution of no metallic shields. As regards riding position, the saddle is well forward, and the handle-bars are in a natural and comfortable position.