Fitted with the Moss gear box, clutch, and kick-starter, and with a well-designed silencer arrangement, which should combine quietness with absence of back pressure, the 349 c.c. Weatherell has many points of distinction.

REALISING the popularity of the 350 c.c. fast touring machine, Mr. R. W. Weatherell has placed on the market one of these which bears his name. The motive power is supplied by a 349 c.c. Blackburne sports engine (71x88 mm.) with overhead valves. Great care has been exercised in the construction of this machine, and it will be noted, on referring to the photograph, that the exhaust pipe is led away with an easy curve in which there are no acute bends, and it finally terminates in an expansion chamber of ample dimensions and a short extension pipe. 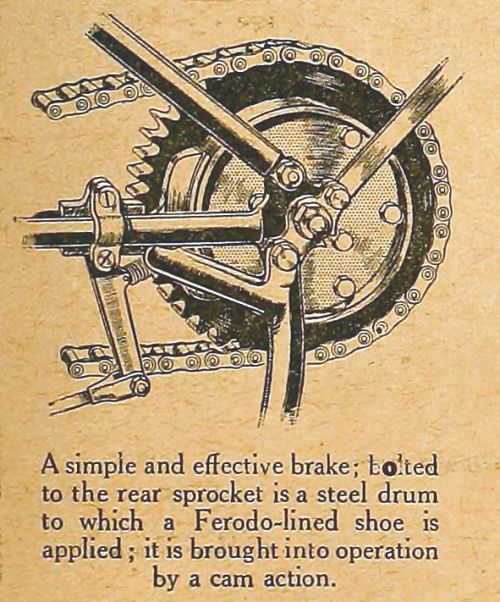 Ferodo-lined brake shoe
A simple and effective brake; bolted to the rear sprocket is a steel drum to which a Ferodo-lined shoe is applied ; it is brought into operation by a cam action.

Miralite aluminium alloy is used in all cases where aluminium would be ordinarily employed ; this is exceedingly tough metal, having a tensile strength of 14 tons. It IS. used for the magneto bracket, silencer end, and similar purposes.

A feature of the Weatherell is the double top tube, which makes for lightness in construction and stops whipping. Particular attention has been paid to the brakes, which are both of similar design, and consist of a Ferodo-lined shoe applied by means of a cam action to a steel drum in the case of the rear brake bolted to the rear wheel sprocket.

Steel is the material used for the engine plates, and 14 gauge tubing is employed practically throughout the frame construction. 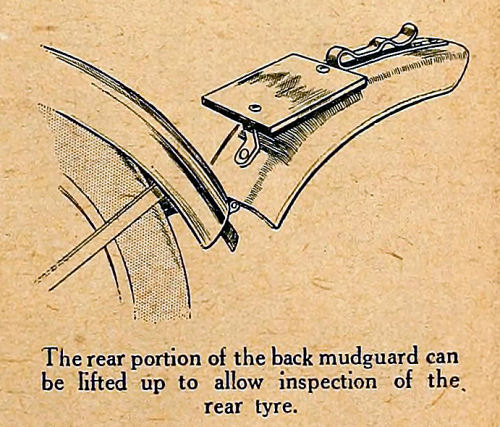 The rear portion of the back mudguard can be lifted up to allow inspection of the rear tyre.

Simplicity is one of the chief points about the lubrication system, that employed having already been described in The Motor Cycle under the name of Jebon. It consists of a chamber, containing a float, bolted on to the crank case and communicating with it. This device is also connected with the oil tank and works on the same principle as a carburetter float chamber, maintaining a constant level of about ¼in. depth in the crank chamber.

Other points about the machine are the width of the mudguards and the employment of flat strips as stays, while a considerable portion of the rear guard can be hinged back so as to allow access to the tyre.