Notes on a Short-lived Marque

Several prototypes were built in France by two Englishmen, some of which were successfully raced, but the machine was not commercially produced.

A MEDIUM-WEIGHT motor cycle ot 317 c.c, having a unit engine clutch and gear box, a propeller shaft and worm drive, has been designed by two English residents in Paris, Messrs. Claxton and Beatty, and, it is declared, will be put on the market shortly in both France and England. 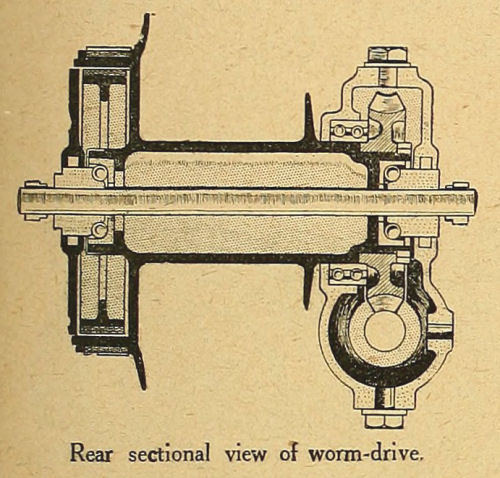 Rear sectional view of the worm-drive.

While the outstanding feature of this machine is the substitution of shaft and worm gear for the more usual methods of transmitting the drive, the engine is not without interest. It is a single cylinder of 70 X 76 mm. bore and stroke, with valves on one side. Hyatt roller bearings are used for the main shaft, while the big end has plain bearings. With a view to effecting protection from dust and mud, as well as easy cleaning, the valve stems are enclosed by telescopic sleeves and there is a particularly neat dust-proof aluminium housing over the magneto, which is carried on a bracket in front of the engine. As the usual type of magneto advance lever is difficult to enclose, fully, use has been made of a rack and pinion with a Bowden wire control.

The engine is mounted on an aluminium crank case, which forms a unit with the clutch housing and the gear box. An eighteen-plate disc clutch is used, and immediately behind it is the two-speed gear box.

Hyatt roller bearings are employed for the gear shafts. From the gear box to the underslung worm on the rear wheel hub there is a propeller shaft with ball ends, one of which is received in a socket in the driving and the other in a similar socket in the driven member. The shaft, alone, cannot transmit power, but it is surrounded by a closely wound circular section coil spring, the two ends of which are screwed into and rigidly attached to the driving and the driven members. There is sufficient flexibility in the coil spring to take up all irregularities of the drive, as when running slowly or when starting away, and yet a perfectly rigid drive is secured when the engine is developing its full power.

Instead of a shaft proper the transmission is taken through a long, stiff coil spring, thus absorbing engine shocks and providing a simple universal joint. The ball-headed rod acts as a distance piece.

An underslung David Brown worm is used, the efficiency of which is stated to be 95 per cent. Heavy radial and thrust ball bearings are used for the worm and the worm wheel, and the whole mechanism is oil-proof and dust-tight. The propeller shaft is enclosed in a steel tube, while the worm and worm-wheel run within the aluminium casting, the upper portion of which can be removed after withdrawing two studs.

A drum on the rear wheel hub carries an internal and an external brake. Change of speed is effected by a lever on the right-hand side, with a gate giving two speeds and neutral positions. Among the features of the machine might be mentioned the exhaust pipe, the diameter of which is rather greater than that of the exhaust port, and the big capacity silencer mounted just ahead of the engine and under the magneto bracket. The exhaust is therefore got rid of with an absence of back pressure and without noise. The weight of the machine, fitted with 26 x 2¼in. tyres, is just a little over 150 lb.

Some remarkable weight-paring must have been accomplished to bring the machine down to this exceptionally low figure, which, however, we understand, is only approximate.

That a 317 c.c. machine with shaft transmission should even get under the 200 lb. limit proves that this form of drive need not necessarily be weighty. The unit engine and gear construction, of course, helps materially by eliminating primary chains, sprockets, and covers, but probably the greatest saving is in the shaft itself.

It is the intention of the designers to put this machine into mass production, and with this end in view they are having the drawings verified by machine tool makers and are preparing to lay down special machinery with a view to cheap production. It is stated that the motor cycle will be built both in France and in England, and that it will be marketed at a very reasonable price.

If you have a query about these classic French machines, please contact us