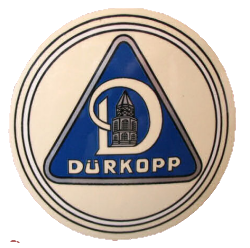 Founded in Bielefeld in 1867 by Nikolaus Durkopp, the factory was producing motorcycles before the turn of the century. Motorcycle manufacture ceased between 1912 and 1927. Production of all motorcycles and scooters ended in 1961 as sewing machines were proving more profitable.

The exhaust side of the Durkopp four-cylinder Bicycle Engine, each cylinder measuring 52 mm. x 60 m.m. This engine has a self- contained magneto, built up with the flywheel. An illustration and description of this magneto device appeared in The Motor Cycle for January 23rd, 1905, page 81.

The four-cylinder engine has a bore of 52 mm. and a stroke of mm. The valves are mechanically operated, the inlet and exhaust valves being on opposite sides. The usual Durkopp v-tension magneto incorporated with the flywheel is fitted, the four exhaust valves are raised simultaneously by means a sliding rod in which parallel slanting slots are cut. When is rod is pulled forward it slides along in a slightly upward reaction, lifting up with it the valve washer. At the end of e camshaft operating the exhaust valves the contact breaker is carried, which gives a large range of advance. The distributor is worked off the camshaft operating the inlet valves. These latter have a variable lift. Each cylinder is provided with a compression tap, the top of which is protected by a spring dust cap, the whole fitting being particularly ingenious and well made. This engine is fitted with a larger flywheel than is usually found on four-cylinder motor bicycle engines. All the Durkopp engines are fitted with ball bearing crankshafts.

In the 1920's the Durkopp automobile factory employed over 6000 workers building a range of cars which included models from 1500cc to over 6 litres.

The company was very active in the years leading up to WWII, producing all manner of armaments and components, and by 1944 had up to 3000 prisoners of war and forced labourers in its workforce.

Post-war production commenced with a motorized bicycle powered by a 48cc JLO engine delivering power to the rear wheel by roller drive.

1955 saw the acquisition of the Ardie company following which Durkopp's Fratz I, II, III, IV and Dianette mopeds were marketed under the Ardie label.

First displayed at the Frankfurt Show of 1953 (the IFMA Fair), the Diana scooter entered the market in 1954. A relatively luxurious unit with electric start and a four-speed gearbox for its 200cc two-stroke engine, it was well received.

Two new models were introduced in 1959, the 175cc Diana TS and the Diana Sport with a more powerful 198cc engine.

Production of the Diana and all motorcycles ended in 1961.

After a series of mergers, the company was bought by Chinese investors in 2005.

Excellent history in English and German at duerkopp.de/history.htm

27-May-2020
nikola.cicovacki at gmail.com
Diana
I need someone to get in touch with me
I have started my restoration process on my Diana 200cc and I need some spare parts! Can someone help me?
Nikola Cicovacki
Sombor, Serbia 15-Oct-2018 oetjens.manfred at t-online.de
Duerkopp ML 100
Hi, I'm looking for a wiring diagram for the a.m. bike. best regards manfred
Manfred Oetjens
schwedeneck, germany

garylatl at yahoo.com
Durkopp MD 150
Hi, How can I determine a reasonable value to place on this motorcycle? It is in almost perfect cosmetic condition, but it has not been operated in a few years. It was professionally restored in Germany and shipped to a private collector in the United States prior to my acquisition. I have attached a pic of this motorcycle.
Gary Hoilman
Clayton, GA 30525 USA

Durkopp 1953 MD200 Washington
Tue Jun 06 2017
dvdchipman67 at gmail.com
Value if sold
Durkopp MD200
I found this bike awhile ago and had never heard or ever seen one. I have searched the web and have no luck finding a value on it. It had been just sitting for quite some time under a tarp. I don't have the funds to restore it or the time so was looking at selling but want to know where to start or look. Thank you.
Washington state Sun May 22 2016
pontijm at swissonline.ch
wiring Durkopp MD200
Durkopp MD200 1953
if anyone have a wiring for a Durkopp MD200 1953
It would be very helpful for me It seems different from the 1952 with 2 ?? in the light
La Tour de Peilz Switzerland

Sun Sep 28 2014
jmgouv at yahoo.com
Durkopp Diana 200 Model D2
Hello,
I'm restoring a scooter Durkopp Diana 200 Model D2 (chassis number 201942).
However I have had difficulty finding who sell parts for this brand.
Looking for some help and thought someone here might have information on where to buy these parts.
I'll be very grateful if you could give me some response.
I need the following parts:

Thu Mar 15 2012
bebsreilly<at>gmaildot com
Bike for sale
Durkopp Dianna
1958 Durkopp Dianna Scooter.Classic scooter, fully restored, nut and bolt rebuild. Any inspection welcome. Call for more details. Photos before and after. This is a rare opertuinety to own a pice of motering history.
Price: 4,750 http://www.donedeal.ie/for-sale/vintagebikes/2878956
Dublin Ireland

Fri Jul 08 2011
drsanjeevvaz<at>gmaildot com
chaincover
durkopp md 200 1953
I am restoring my father's MD 200. I need a chain cover , the aluminium insert at the junction of the cover and the engine and also the disc which fits on the rear wheel between the top and the bottom half of the cover. Can you help me find these parts. Thank You
Goa, India.

Wed Feb 23 2011
michael.e.regan<at>gmaildot com
Durkopp Diana Bicycle
I am having incredible difficulty finding any information on this bicycle. Can anyone help me identify it and tell me a little about it? I'm not sure if it is rare or not. I'm not sure how to tell exactly what decade it is from either. Any help would be wonderful. Thanks!
New York

Fri Jun 05 2009
aswin.rinaldy at yahoodot com
My Collection
1952 MD 200
I am an Indonesian. I have Durkopp Motorcycle MD 200 1952 with 2 manual book and its original wrench. Lucky me! hahaha
Indonesia

Sun Apr 26 2009
lkrha at online.no
durkopp m12 1938
hi
does anyone know where I can find parts for my 1938 sachs engine?its difficult to find parts here in norway

Tue Mar 31 2009
kelli-webb at yahoodot com
Vintage Motorcycles
Duerkopf Duerkopf
I don't know much about these German motorcycles other than we have one and I would like to find out more information about it. Can you help me? Kelli
Florida

Sun Jan 18 2009
s.lockley at skydot com
scooter
1960 durkopp diana diana sport model 60.
We have a 1960 durkopp diana for sale, unfortunately not in working order we have also workshop manual which is very good condition.wondered if anyone interested in buying please contact
either by
email, or phone tel 01142213644
sheffield south yorkshire

Wed Dec 10 2008
m.ferguson949 at btinternetdot com
dukupp diana sports
where can I get pistons for 1959 machie anybody help me, best regards
m. ferguson
scotland

Tue Nov 25 2008
bmorley at bigpond.net.au
Durkopp Mr Diana scooter
Mr Diana 1958
Need a clutch cover for my Mr Diana and was wondering if you know where I could get this or who to contact to get this?
please email me
cheers,
kelly

dear sir,
I have a Durkopp Diana.
I think it is a 1957 model.
I require some parts to complete my restoration.
I also would like to see if I can still but a work shop manual or a book with information.

Can you please guide me as where I can aquire more information about this bike.
I thank you in advance and wait your reply.

I have 1956 Durkopp Diana I'd like to sell. It is complete and in good running condition. $3500 or near offers.
Maryland

Mon Oct 15 2007
dburgess at nwlinkdot com
My Old Scooter
1958 Durkopp Diana
Mischa in Detroit has posted a picture of what I believe is my old Diana. If Mischa sees this, please contact me!! David Burgess, Seattle
Seattle, WA

Thu Aug 16 2007
karl.orpin1 at btinternetdot com
Engine
1958 Durkopp Diana
How much would a 100cc engine cost for this scooter?
London,Kent

Sun Jul 15 2007
philtaylor207 at hotmail.co.uk
scooters
durkopp diana 200 sports
hello the scooter is running and would mot
i have the v5 it has its own number too many projects thanks
yorkshire

Wed Apr 18 2007
MischaP at comcast.net
durkopp
1958 durkopp diana
I would love to get the oil and fluid specs if anyone has them. I can't seem to find any info.Anything would be greatly appreciated.
Detroit, Mich

Sat Mar 10 2007
bern.bennett at tesco.net
Photo for gallery
Durkopp Diana Sport
Attached photo of my Diana in the late 50s.

Had a partial seizure after 200 mile trip, engine distmantled by M/c expert who said it was the finest 2stroke engine he had ever seen, and he could not understand why a needle bearing had disintegrated as the lubrication was fine.
Toured Holland & Belgium in the following 2 weeks and everything went fine.
Coventry UK

Tue Feb 27 2007
mdawson at hbgc.co.uk
Durkopp Manuals
1953 OTTO 150cc
My friend has purchased a 1953 150cc Durkopp and would like to see if a wiring diagram is available, as it currently is stripped of all wiring. Does any one know if this is available somewhere and if spares are available in the UK?
Brighton

Tue Jul 04 2006
ssteedman at sbcglobal.net
Durkopp Motorcycles
150cc
I'm interested in buying a Durkopp? Do you know of any for sale?

Tue Mar 21 2006
design at smoothprintingdot com
durkopp
1952 durkopp
I was wondering if you could point me to any info on durkopp motorcycles, parts, history any thing would be helpful. Not finding anything on line about them. thanks, clay
Mo

There are a few entries for Durkopp in Bikelinks, here:
http://bikelinks.com/directory/Classic_Motorcycles/A_to_Z/D/
Otherwise, information is very sparse.

Fri Nov 18 2005
osdaljul at hotmaildot com
durkopp scooter
I own a Diana TS 200, who can help me to find technical information about this scooter
Julien Dams ,Belgium

Sat Oct 29 2005
mailbox.tut at tut.by
duerkopp m10 1927 year
hi! i own durkopp m10 motorrad, but i cant find any information about it. please if You have a material about it write me.
sincerly yours, max.

Sun Oct 16 2005
canovaclaudio at ciudad.com.ar
Durkopp Moped Cycle
Could you please let me know some about this Durkopp.
Greetings from Argentina.
Claudio.

Thanks for your fast reply, I bought this bike many years ago in Argentina and was in the shape you saw I just make a little upgrade in the Engine, as you can see the bike is an Original Durkopp cardan transmission the Engine is two strokes and the transmition to the front wheel is done by a rubber chain, I`m sending another close up picks, somebody told me that this bike is from1918 y realy don`t have no idea, thay is the meaning at once to share this bike to the Web and the other is to help me to know about the History of this rare Bike. Hoping to have news form You.

July 23, 2000
HI I own a Durkopp bike under a Portuguese registration as being a MD176 model from 1958. The bike is a 2stroke single cylinder 175cc with 2 exhaust pipes, one on each side. I'm trying to find out as much as I can about it, things like manufacturer's history, technical designs (restoration is involved), parts' dealers, market value etc. It looks like a DKW 175 of 1957 but with an extra exhaust. Any information welcome. THANKS. -- Paulo Noronha  -- psergionoronha at hotmaildot com

If you have a query about Durkopp motorcycles please contact us