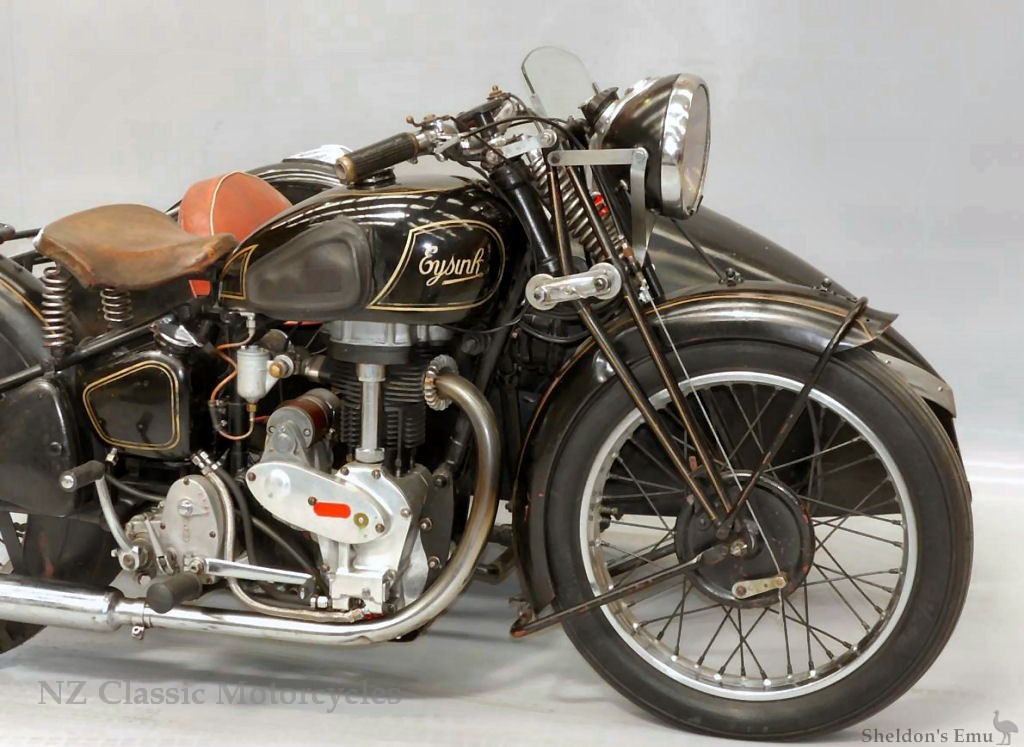 The Eysink combination pictured above was bought shortly after the Second World War by a French soldier who had taken part in the liberation of the Netherlands. He took it home to Nice and used it, with its Imperial sidecar, as his personal transport for many years. Later he worked at the Chateau Margaux wine cellars where the machine was used until 1963. The combination remained there after the owner’s death until it was discovered in 1995 by a Dutch Eysink enthusiast.
It was purchased for the NZ Classic Motorcycles collection from antique motorcycle specialists Yesterdays in June 2008.

From 1923 to 1927 they also made machines with 500cc boxer engines from the well-known British firm Coventry-Victor.

In the years preceding WWII, Eysink built two-strokes with Villiers engines and four-stroke-models of 250 cc to 500 cc with JAP and Python (Rudge) engines. They also employed powerplants from Blackburne, JLO, Matchless and New Hudson.

After the war they produced two-stroke machines up to 250cc, again with Villiers engines. It seems that the production of motorcycles halted in 1956 (2), with moped production continuing until at least 1965.

Eysink won the 125 cc Assen TT in 1946 and 1948, which was one year too early to be a Grand Prix victory.
Other successes include the Silver Vase at the 1931 International Six Days Trial, ridden by D.H. Eysink.

The former bicycle is of exceedingly neat design, and very careful attention has obviously been paid to details. The engine, which measures 62 mm. by 70 mm., has an outside flywheel and automatic inlet valve. The exhaust pipe is fairly long, and the silencer is of ample dimensions, and should conduce to silent running. The magneto chain drive is entirely enclosed, and the magneto machine itself is located at the rear of the engine in a horizontal position, and above the crank bracket. It is thus completely protected from mud and dirt, and is also very accessible. The frame is low. Simplex spring forks are fitted as standard, and the total weight of the machine is claimed to be within 100 lbs. The price for 1908 has been reduced.

The larger machine is very similar in design to the smaller type, but it has two vertical cylinders, side by side, of the same size as the lightweight. On the twin model an expansion chamber is provided and a very long and sensible exhaust pipe. The magneto on this machine is vertical, gear driven, and carried in front of the engine. Both machines are fitted with F.N. carburetters and Englebert tyres.

On another part of Mr. Timperley's stand are shown Bown's ... motor cycle and car bearings, which will interest the practical reader and appeal to the manufacturer.

Flywheel side of the new 3 h.p. Eysink - a motor bicycle of Dutch origin.

An Up-to-date Machine of Dutch Origin.

THE name of Eysink will not be altogether unknown to many readers of The Motor Cycle, in view of this machine's appearance in various Anglo-Dutch trials. It is a Dutch-built machine, its home being in Amersfoort, and in general design it bears a strong resemblance to the average English single cylinder machine.

Several models are made but the one illustrated is typical of the general design and construction of all. This is a 3 h.p. single-cylinder machine. The engine dimensions are 74 mm. x 85 mm. which give a capacity of 365 c.c. The valves are of the side by side mechanically-operated type, whilst the magneto is placed in an accessible position just behind the cylinder. It will be noticed from the illustration that an outside flywheel is employed, also that a totally enclosed kick starter is embodied with the countershaft two-speed gear. The drive is by chain to the countershaft, and thence to the back wheel by belt.

From the foregoing it will be gathered that, broadly speaking, the Eysink machines follow standard practice, and indeed, have British fittings incorporated in their design. It only remains to be added that the mudguarding, springing, equipment, etc, appear to be all that they should be.

12-Oct-2020
frank_zeinstra at hotmail.com
Eysink mini 1973
Do you sell these Eysink logo's as stickers?
I want some for my moped Eysink mini 1973.
Frank Zeinstra
Nederland

Tue Nov 08 2016
rien.span at virtualogic.nl
eysink record
record sport
Love to see my new bought machine when i was a boy. Have still the small book with garanty page in it. an the date of buying was 3sept 1961 the dealer was Drogtrop in Beverwijk Netherland If someone likes a copy of one of the pages, feel free to ask
living 4 years in mid Portugal .

Tue Oct 02 2012
jackroos<at>ziggo.nl
https://cybermotorcycle.com/gallery/eysink/
Eysink 1937
I'm looking for years for that Eysink.
Wan's, i had one, when i was 19 years from my dad.
Will you sell this machine?
Alphen aan den Rijn, Nederland

Tue Sep 02 2008
barry.gosling at sky dot com
Eysink Renata Registration
I am buying a Eysink Renata but no one knows the years of manufacture. Is there somewhere I can give the details of serial numbers and find out the exact year Tahnk you
Barry Gosling
Cornwall, UK

Mon Nov 21 2005
harila at planet.nl
Hello,
I have a motor cycle and wants to sell it does somebody know home much i can ask for it?
Its an eysink

I have a bit of a problem, which I hope you can help me out with in your club.

I purchased this 1952-3 Eysink about three years ago for €600.00, or 6,000,000rp. A good buy I thought! The Villiers 175ccm motor went really well, (what can we expect from Norton!) but unfortunately, while riding about in West Java, Indonesia with it, I ended up at the bottom of a 2 meter ditch. It's a longish story, and I still hobble a bit and have whiplash problems due to that one!

The cause of it all was an extremely steep hill, a sharp turn which then progressed to a steeper gradient, and failing drum brakes in the front ( a piece of metal from the braking system got stuck between the shoe and the drum). Apart from that my good wife, who was riding in front of me, thought it kind to warn me of the up-coming danger and stopped in my line of attack (so to speak). I had no choice but to move to the right of the road, where I saw long grass growing, and ‘ditch' the bike. Unknown to me that long grass covered a huge ditch, so I literally ditched it!!

The front forks were severely bent, tank dented, but the frame was still good, and I could see no option but to recondition it. That's when the real problems started!

I'm not too sure how many of these bikes are still running about (or even stored in someone's barn under some hay) in Holland, I know that at all the meets that I have been to I can't remember seeing one. Plenty of Sparta with the smaller 125ccm motor, but no Eysink. Even meets around Amersfort (Barneveld, Achterveld, Utrect, and so on) were fruitless.

I got in touch with some bloke somewhere in the south, but even though I continually hounded him for information he never returned a mail to me (not even to say sorry, he was to busy to deal with my menial problem with what could be considered as an extremely rare bike - In the last 3 years I have never seen one in the whole of Java).

So I started the restoration blind, I didn't (and still don't) know what they originally looked like! I don't even know what type it is! I can't find a manual or anything. After more than 3 years in restoration - I couldn't find the correct caberator - Here's what it looks like:

As you can see there are some pieces missing! The side case for a start, and there's some kind of attachments for something, which I gather is the battery case, behind the air filter. Here's a closer look:

You can also see that the chain guard and rear spring guards are missing. These lacking items are of little problem for me as I can remake them from pictures, but where are the pictures?? I certainly don't have any!

The lamp top is a bit of a problem too - have a look:

There are two holes! There's also a bunch of wires of all assorted colours and sizes! I take it, and it seems logical to conclude (though I know logic doesn't really come into it! And concluding something without any information is a bit stupid, to say the least!) that the large hole is for a speedometer, and the smaller hole is for the ignition and light switch (something like, I imagine, what was used on Norton bikes of the time - since the motor is Norton, what would be the reason for having different ignition?)

Now, the speedo is of some concern to me. I can't for the life of me work out how it is attached to the rear gadget at the rear wheel axle? There seems to be too many curves and bends in the cable for it to function correctly. How on earth is it connected?

So, if this wasn't enough, the next problem is that I can't find the decals, or the badges as may be the case. Here's a view of the tank for starters:

Now, I used my logic and conclusive methodology and came up with these decals:
Tank: The problem is the decal says Soest, and the brass emblem on the frame says Amersfort!

So, now I fear that I have taken all the space up on your website Eysink lovers.

Please, Please, PLEASE, if you have any information relating to this bike, perhaps a manual you can photocopy for me, or any ideas where I can get this info, please contact me at tim< at >bdg.centrin.net.id or continue this ‘discussion' on your page, and then, perhaps, we will be able to see a bike like this ‘thundering' around Amersfort in the future.

Tank you for your time and effort in solving my problem,

subject: Eysink
Email: jan at roden.nl
message: Your site about Eysink contains a lot of errors, which is not bad at all, because there is not much written about the factory. Last year a book was publicised, called Eysink from bicycle to motorbike (it also includes car production and other Dutch brands, like Simplex, Sparta and such), it is written in Dutch. If you want I can make a sumarise of this book.

There are 3 kinds of tandem mopeds. One with a berini motor at the front-wheel (Model A), a standard model with the motor in the middle (a J.L.O. FM 48 E type) (model B) and last a luxe version of model B.

How does I know all this? I personally have an Renata tandem-Moped, and I contacted Dick Eysink himself a few years ago. He wrote me a letter back, including a folder. So if someone is interested in pictures of the mopeds, contact me... (sorry for my bad english...) greetings from The Netherlands...) Ivo -- W.I.d.Graaf at student.tue.nl

You are missing an important Dutch make from the past : EYSINK. This factory produced motorcycles from the early 30ies until the 50ies and even won the 125 Dutch TT with Dick Renooy end 40ies. During the 60ies they produced interesting mopeds -- Zwaal -- hobbimex at worldonline.nl

If you have a query about Eysink motorcycles or have information about these classic Dutch machines, please contact us