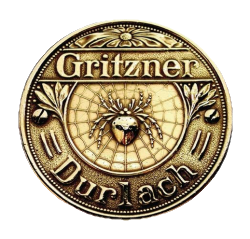 The last of the dreirad commercials was built in 1914.

Established as Gritzner & Co, A.G. in 1872 by Max Carl Gritzner, an American citizen residing in Bruschsal, Baden, the company initially produced sewing machines, and added bicycles to the product range in 1897, and motor-tricycles in 1901.

Motorcycle production began in earnest in 1903 using Fafnir singles and V-twins, paused during the first war, and from the armistice until 1940 they built commuter motorcycles.

They merged with Gebrüder Kayser AG in 1931 to form Gritzner-Kayser AG.

Postwar production resumed in 1948, again with commuter machines powered by Sachs engines of 48cc to 175cc, and their own Gritzner engines.

The factory was largely destroyed by fire in 1955 (it had happened before, in 1881), and the firm was acquired by the Pfaff sewing machine company in 1957, trading as Gritzner-Pfaff. They obtained the rights and took over the production facilities of the Mars Monza and Milano, building these until the 1970s as the Gritzner Monza.

KTM Roller scooters were sold by KTM, Gritzner and later also by Rabenick.

Sun Dec 31 2006
bergsat at bp dot com
Gritzner Brummi
Hello - I am searching out the make and name for a moped a friend of me has. It has a plate with Brummi on it and it has a Sachs 50 cc engine. I think it is a Gritzner - but maybe you could confirm that? Where can I find litterature/pictures of the Brummi ?
Norway

If you have a query about Gritzner motorcycles please contact us