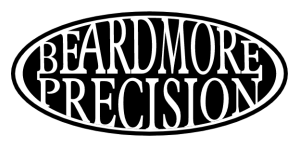 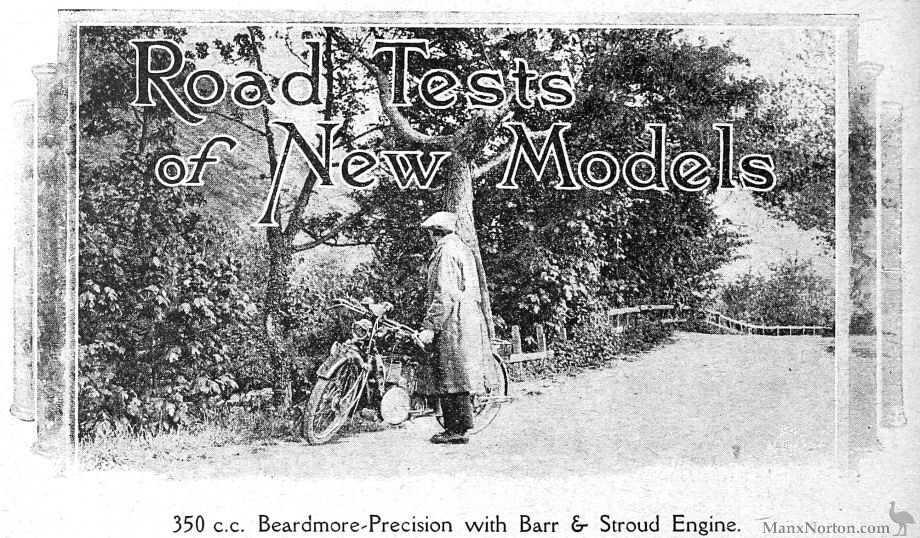 The Beardmore-B.&S. was tested in the Isle of Man. It is here shown passing the deserted mills in Sulby Glen on its return from a successful attack on the hairpins and gradients that lead to the Snaefell mountain road.

As a machine suitable for overseas conditions the 350 c.c. Beardmore, with Barr & Stroud engine, should be ideal. It is strongly built and easy to handle, while there is ample ground clearance and the footrests are placed at a good height.

NOT having previously ridden a machine fitted with the Barr & Stroud engine, yet fully aware that as a unit it had special features which had enthused more fortunate colleagues, the opportunity to borrow one for an afternoon was seized with alacrity.

For journalistic road-testing purposes the selection of a machine taken to the Isle of Man as a T.T. hack by one of his staff is scarcely fair to the manufacturer, who naturally wishes to place a new, if not specially selected machine into the hands of a pressman.

Not a New Machine.

However, it was just fortuitous circumstance that placed a very much used, very dirty, and altogether ancient and ill-used mount in our possession on that sunny afternoon when the machine was tried.

As the weather was very hot, no difficulty was experienced in starting; with great ease the engine came to life with the weakest thrust of the starting pedal. Moreover, the smooth way in which it commenced to tick over, without any preliminary racing or fuss, pointed to a commendable freedom from those minute air-leaks which often have an appreciable effect on some most excellent poppet valve engines until the heat of the cylinder has reached the carburetter.

Before starting away the complete absence of the usual rattle of a poppet valve engine was noticeable, and the exhaust was quiet almost to the degree of "woolliness."

Letting in the clutch gently without appreciably opening the throttle, the machine went away well on its first gear; no doubt the large outside flywheel permits this unspectacular method of starting, and maybe in consequence will be a great grief to the really hot type of rider who "gets away" from the starting line of an all-night reliability trial as though commencing a "standing start" attempt in a speed hill- climb. To such as he, however, the docility of the B. & S. engine may be circumvented by widely opening the throttle and dropping in the clutch on middle or top gear, for the gentlemanly tone of the engine's conversation belies its manner if it is so desired, and it will deliver a decidedly hefty punch.

Once on the road it is difficult to describe in what way the power unit differs from other first-class engines. Take the best single-cylinder poppet valve machine there is - letting "best" in this instance signify such qualities as flexibility, silence of operation, and freedom from vibration.

There are one or two engines in which these qualities may be said to be developed to the utmost extent possible to their type. Good! Mount a machine powered with the B. & S. engine, even one with a worn and slapping piston and a rather noisy gearing to the magneto, as had that fitted in the Beardmore, and an indescribable difference will be sensed It is a difference appreciated rather than felt as this, that, of the other apparent and positive quality.

That rather "woolly" exhaust sound is indeed deceptive. Even in a comparatively heavy layout like the Beardmore frame, which is built with an eye to stability and consequent comfort of mind, the engine is capable of a thoroughly satisfactory touring performance on the open road. In hill-climbing, too, there is ample power for the ascent of freak gradients, picking a course amongst rocks and boulders at low speed; throttling down to a dead crawl on a hairpin and opening wide immediately a fair passage is assured.

Under all such circumstances a smooth response is made to the opening throttle; there is a kind of elastic "push" which enables the machine to be controlled with great flexibility at low speeds without any tendency to knock and without the necessity for delicate spark manipulation; somewhat a rare quality with a long-stroke cylinder.

On the particular engine under review a decided piston rattle was evident, and, as before mentioned, the magneto drive appeared to be unduly noisy. The former may well have been a characteristic of the individual machine, but the latter was rather inferred to be a defect of the method of driving. Chains seem to be preferable for such subsidiary drives.

So far the engine alone has been dealt with, but the Beardmore-Precision frame is by no means unworthy of notice. The sturdy construction is obvious not only to the eye, but to the muscles when the machine has to be hauled up on to its stand. Slightly greater height than the normal increases the effort of the latter operation, but does not appear to affect the steering.

A comfortable riding attitude is provided by the sports type of layout, and the high footrests and ample ground clearance make the machine a suitable one for trials and general rough riding. Steering was remarkably good and steady; even a fiercely braked back wheel on a rough and stony descent only resulted in a perfectly straight skid of some twenty yards; incidentally the rear dummy belt rim brake is not harsh unless powerfully applied. The braking action is smooth and progressive with the pedal conveniently situated against the right footrest in a position which does not necessitate any searching. The contracting band front brake, it must be admitted, was neglected. This omission to test a detail of the machine is due to a forgetfulness regarding: its existence which the power of the rear brake encouraged. For ordinary pulling up on the level when a premeditated stop was made it was smooth and effective in its operation.

Altogether an admirable mount, powerful enough for all ordinary and strong enough for most extra ordinary riding.