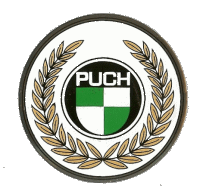 Max Reisch (1912–1985) was a long-distance motorcyclist who made what is believed to be the first overland journey to India from Europe, in 1933.

Prior to this extraordinary journey, Max took what he described as a "test ride" to North Africa on a 1929 Puch 250T. His route: South Tyrol - Italy - France - Spain - Shipping in Malaga to Africa - Morocco - Algeria - Libya - by ship from Tripoli to Sicily - Italy - Austria.

In 1935 he rode to Indo-China, and the following year he circumnavigated the world.

His father, Hans August Reisch, crossed the Alps to the Mediterranean in 1904, also on a Puch.

The Deutsches Zweirad & NSU Museum has one of the largest motorcycle collections in Europe, representing a great many German brands from the past century in a spectacular setting.