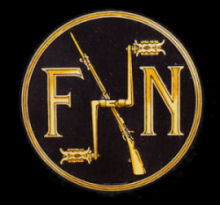 Ten examples of the F.N. are exhibited, two of them nickel-plated all over. Several alterations have been made in the new four-cylinder model, and. the lines of the machine have been somewhat altered so that they could conform with the English ideas of a standard machine. The engine remains practically unaltered, except for the strengthening of certain reciprocating parts. Two plates have been added to the clutch, and a kick starter is now fitted. A neat two-speed gear is incorporated in the casing of the shaft drive. This gear is of the sliding type. The high gear is direct, and is engaged by a sliding dog; the low gear is engaged by a sliding gear wheel. The shafts run on adjustable ball bearings, and the portion on which the dog slides is castellated. The gear casing is of cast steel, and has an inspection door. The frame is somewhat lower, and has a dropped top tube, giving a saddle position nearly four inches lower than in previous models.

A front wheel stand has been added, and the carrier and part of the rear mudguard are detachable to facilitate tyre repairs. Pannier toolbags are now fitted. The tank is shallower but wider, and holds 1½ gallons of petrol and nearly half a gallon of oil. It now has an enamel finish instead of the oxidised finish so well known on these machines. Large glass-topped filler caps are used; a strainer is placed inside each filler cap, and, in addition, a filter is fitted between the tank and the petrol pipe. Lubrication is arranged on the sight feed drip plan; once the adjustment has been set it is only necessary to pull up the pump handle and the feed is automatic. A gear and shaft drive cut in section demonstrates the extreme simplicity of the gear. The carburetter is of the semi-automatic type. An extra air valve of novel design with a delicate action is situated over the jet and controlled by a handle-bar lever.

This model remains unaltered except for the finish, the tank being now enamelled and plated rims being fitted. Side extensions are now fitted to the mudguards, and the saddle position is very low.