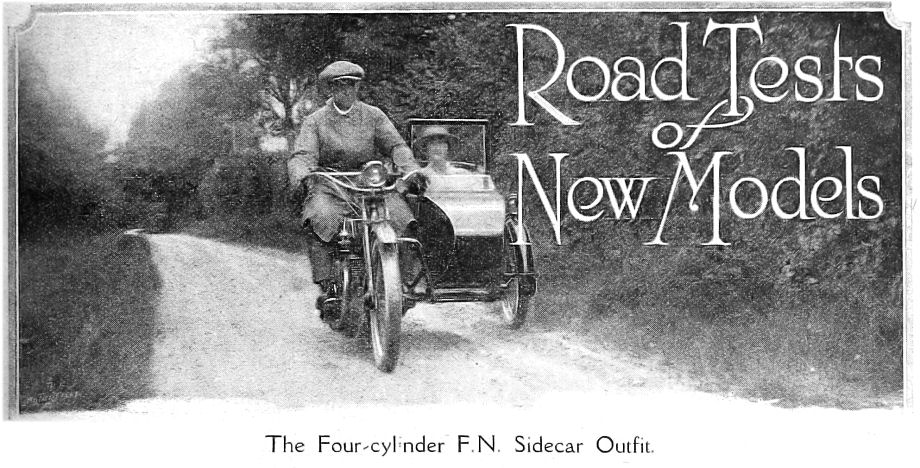 View of the complete outfit which illustrates the position of the silencer commented on in this article.

JUST as Great Britain had the honour of turning out the first six-cylinder motor car, so to Belgium must be given the credit of rendering the first tour-cylinder motor cycle a marketable proposition. The F.N. motor cycle made its appearance in 1905 and has been manufactured steadily ever since, the first four- cylinder machine designed (in England, by General Holden) being only sold in limited quantities.

A trial of the F.N. was particularly interesting to this writer, for he has followed its development from the time when it had automatic inlet valves and no gear, through the period when it had a two-speed gear, when, in 1914, it was completely modernised with mechanically-operated side-by-side valves, a three-speed gear box and a plate clutch, to the present model, which has overhead inlet valves. It has been improved out of all recognition; and, although the 1922-23 F.N. is not in the sports model category, it is capable of commendably high average speeds.

Our first acquaintance with the machine was on the occasion of the finish of the Six Days Trials, when necessity compelled us to make two ascents of the Brooklands test hill, which naturally were accomplished on first speed but required a very slight throttle opening. Since that date numerous journeys have been made, mostly over average roads, and the behaviour of the outfit on the 1 in 4 section of the test hill proved but an appetiser of its power and capabilities generally for going anywhere.

Take, for example, the hill between Welwyn and Woolmer Green, which is approached by a curve that is never safe to take too fast. Laden with a heavy passenger, the machine ascended comfortably on top gear.

Speed on the level, as already indicated, is all that can be desired, and it seems that the vehicle will hold its own with any outfit of a similar cylinder capacity.

No difficulty was experienced as regards starting; the "take up" of the plate clutch was exceedingly smooth; and the steering left nothing to be desired.

Throughout, the machine is thoroughly well, designed, so that not only is it efficient but also it possesses thoroughly up to-date features, such as a really well-carried out mechanical oiling system, a neat inspection plate to the gear box, and a very nicely, thought-out cover to the universal joint.

However, one or two easily remediable details call for criticism. It is hard to understand why, after having an excellent single lever carburetter of their own manufacture in 1914, the makers should elect to use one of the two-lever variety in 1922; it certainly detracts from the flexibility of the engine. It is also strange that the outlet of the silencer should be underneath the offside footboard so that the exhaust fumes and exhaust noise are unduly noticeable. [1]

Were attention paid to the small items mentioned, the F.N. sidecar outfit would be very nearly ideal. Flexibility and smooth running are the true attributes of the four-cylinder, while the weatherproof, no- trouble transmission in itself is worth a great deal.

Made at a gigantic factory, renowned for good workmanship and excellent material, the F.N. has a reputation for longevity second to none.

Probably due to the machine placed at our disposal having had a hard season's use and not a few honours to its credit in various important trials, the bevel was rather more noisy than might have been, and it would also appear that the balance of the engine at high speeds is capable of slight improvement. The mudguards, too, appeared to be rather small for the large section tyres fitted.

Notes. 1. Possibly the exhaust placement is for improved comfort for the sidecar passenger. Ed.