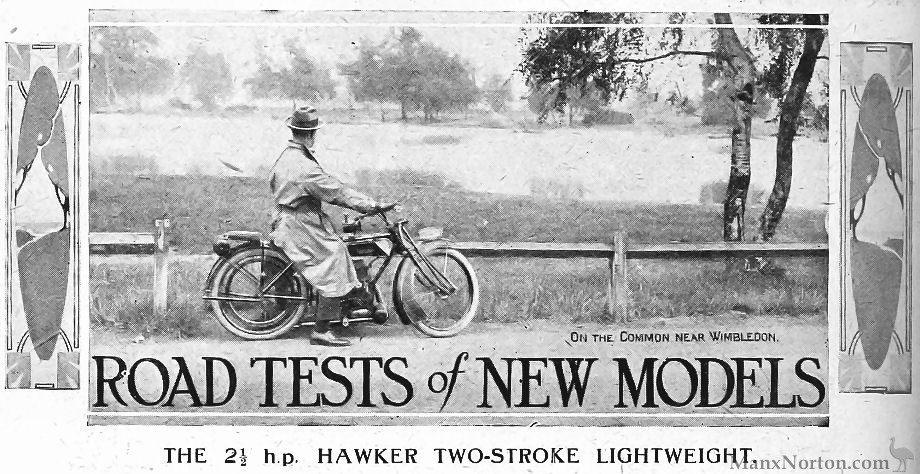 Near-side view of the Hawker lightweight. The magneto and flywheel are in one unit, but the contact breaker is very easily accessible through a small inspection cover in the flywheel casing. Note the twin belt rim brakes at the rear, operated by independent toe and heel pedals on the footrest. The saddle is of very simple design, but is exceedingly comfortable.

Section of the crank case and sump of the Hawker two-stroke engine. Pressure is maintained in the sump by crank case compression acting through a non-return valve in the base chamber. The crankshaft main bearings, of exceptional size, are lubricated by the oil en route from the sump to the big end.

IN taking the Hawker two-stroke machine through a test run of approximately 100 miles, its performance was judged with due regard to the fact that the machine was designed and produced by the H. G. Hawker Engineering Co., Ltd., of Kingston-on-Thames, as a comparatively inexpensive and extremely simple lightweight motor cycle.

Mechanical simplicity, reasonable hill-climbing powers, comfortable riding, and ease of maintenance at the outset, were considered to be features of primary importance, and although such desiderata are invariably sought by most makers of small machines, it is, at the same time, not often that their accomplishment is attained at the first attempt. For instance, it sometimes happens that mechanical simplicity is gradually lost in a promising design by various alterations as the machine is passed through the proving process, and with it, very often, ease of maintenance as a corollary.

In the case of the Hawker lightweight, the design is original in many respects, and the ease of maintenance has been brought down to an extremely simple item for the inexpert person. For example, the lubrication system of the engine has no working parts, is entirely automatic in action, and one filling of oil lasts 500 miles. Then again, the speed gear consists of two primary chains running over sprockets of different sizes which are" engaged by dog clutches located within a miniature "gear" box, while decarbonisation is reduced to the simplest of jobs - due to the detachable head - an important point in two-stroke engines.

Our run was taken through ordinary country roads at average speeds from 15 to 30 m.p.h., and the first noticeable point in the machine's behaviour was the good steering qualities and really comfortable saddle. It is possible to ride "hands off" without side sway, and pot-holes do not affect steering. We found that the engine had enough power for the average hill on top gear, and at 25 - 30 m.p.h. the unit runs smoothly, and with a nice reserve of power. No signs at any time of overheating were revealed during our run ; and for hills of some severity, such as are often found away from the main road, the lower gear provides all the climbing powers required, as has been proved in recent trials.

Our test of the Hawker also included some city traffic work to and from the office, and the machine proved to be nippy and manageable in town traffic, the twin rear brakes proving efficient in use, on dry roads at any rate. It is in traffic work that a light solo mount scores, for the test specimens are so handy and easy to manipulate.

The Hawker is an essentially no-trouble lightweight. The flywheel magneto is of very robust construction, and in the event of the engine being taken down, the timing of the magneto cannot be carried out wrongly on reassembly. The chains of the speed gear are on the opposite side of the engine to the flywheel, and, on removal of the cast aluminium chain case, are very accessible and easily adjusted. As mentioned before. the lubrication system is entirely automatic - it feeds oil under pressure to the big end of the connecting rod, and there is no drip feed to watch when riding; while in regard to the machine, apart from the engine and transmission, the only points in the frame that require lubricating are the main spindle of the front forks and the wheel hubs.

Generally speaking, we were very pleased with the behaviour of the Hawker, and at ;£6o it represents really good value for the person who has limited means and requires a simple and easily-looked-after mount. During the 100 odd miles of our run, the oil consumption was one-third of a pint, which is equivalent to 2,400 m.p.g., and petrol consumption about 95 m.p.g.; the first figure is excellent and the second well up to the average.