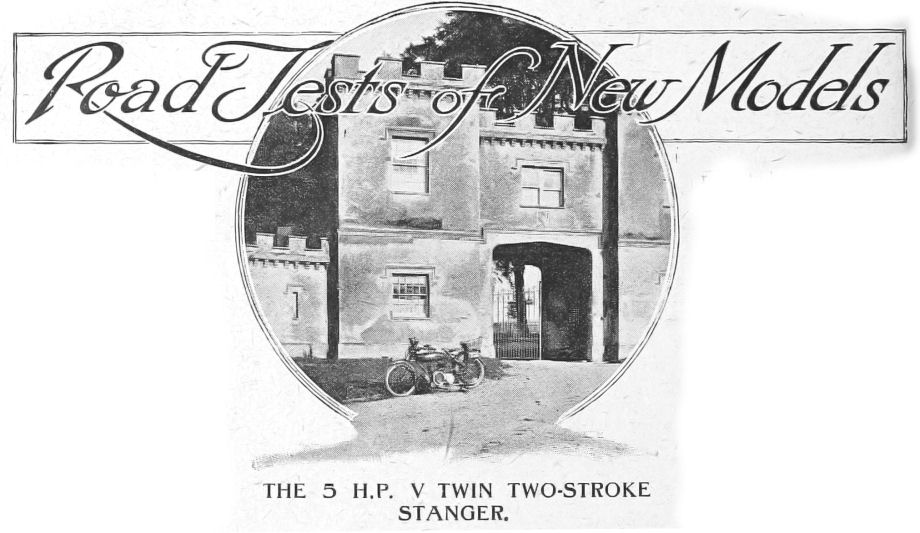 View of the engine showing inlet and exhaust arrangements

An efficient but neat silencer is fitted.

The crank case of the Stanger V-twin two-stroke engine.

MUCH may be said in favour of the twin-cylinder two-stroke engine for motor cycles. Having the torque of a "four," and yet, withal, very simple, it is not surprising that much interest has been aroused by the advent of the only V twin two-stroke on the market, the 5 h.p. Stanger. (This machine was briefly described in The Motor Cycle of June 9th, 1921.) It has now reached a more advanced stage in production.

We were particularly impressed by the excellent workmanship noticeable in all the internal parts of the engine. The cylinders, which are interchangeable, are of the three-port pattern, are highly finished as regards their interior, and have neatly cast radiating fins. The cylinders are offset, but, notwithstanding this fact, the crank journals are only 1 1/2in. apart. The crank case is in two separate compartments, each being compression tight, and a special washer abutting against each ball bearing on each external side is rendered compression tight by an oil seal. The centre bush is in two halves, and there is a greaser underneath the crank case so that grease can be forced on to the crankshaft through four holes cut in the bush referred to. The crankshaft runs on double rows of Skefko ball bearings. The connecting rods possess roller bearings, the rollers being introduced through a slot in the crank, thus enabling the connecting rod to stay in position and each roller to be fitted into place singly.

Two "keeps," made out of one piece, then separated and secured by split pins, serve to hold the rollers in place.

The pistons are more or less of standard design, but are beautifully finished, and carry two pinned rings at the top and one at the bottom. The method of securing the gudgeon pin is worthy of mention. This is held by two headless split pins, which repose in a groove cut in the piston ; they are retained in place by being expanded in the centre.

Considerable thought has been exercised in the design of the inlet pipes, which are so arranged that they distribute the mixture equally to the two cylinders. Although the cylinders are set at 45°, a 180° magneto is fitted. giving equal firing intervals, the crank angle being 135°. The exhaust box is of excellent construction, consisting of two large expansion chambers terminating in a final exit pipe.

The frame is symmetrical in design, and has the rear portion sprung, there being a multi-leaf spring anchored in a box immediately under the saddle. There are two bell cranks working on hardened steel pins at the rear of the chain stay and a stirrup connecting these to the lower parts of the spring.

All moving parts are supplied with grease cups of sensible dimensions.

The other week-end one of these machines was placed at our disposal by the Stanger Engine Co. The Tottenham High Road, is not an ideal place to attempt experience with a new mount, but the surface, though -execrable, was dry, .and we first of all noticed the comfortable way in which the machine throttled down while negotiating the heavy traffic, which lasted for several miles. It is a noteworthy feature of the Stanger that, while we would not like, to say that four-stroking at low speeds is entirely absent, it is much less marked than on other two-strokes we have tried, and would probably be a good deal less if a modern single-lever carburetter were fitted. The machine is particularly sensitive to spark advance, and it is absolutely essential to keep the lever retarded when starting ; and it is also advisable to retard on a hill. The first hill of any consequence came after leaving Enfield Town, and was climbed in excellent style, notwithstanding the fact that there were several checks caused by traffic, and at no time was it impossible to regain 30 m.p.h. on the gradient on top gear. Power and acceleration were admirable. We also found that the machine steered well, and there is no doubt that the spring frame added largely towards comfort over rough roads.

Our destination was reached that evening with no further trouble than a nipped tube, which necessitated the final stage being covered in the dark. The London side of Ridge Hill was 'taken with the greatest ease and on about half throttle, and the remainder of the journey was finished without incident in a curious half-light, which rendered the lamp of very little use.

The following day an excursion was made into the country to test the hill-climbing powers of the machine, and it was taken to a gradient near Dunstable known as Chaul End, a little hill hidden away in the Chilterns with a gradient of about i in 5. During this trip a basket was strapped to the carrier, and in it reposed our favourite terrier, adding about 10 lb. to the \weight of the machine. The hill was descended, and a stop was made at the bottom for a photograph. A restart was made on the gradient on first speed, the engine accelerated, and the change was made into second on the steepest portion, but to our surprise the engine -picked up without a falter, and finished the climb at about 20 m.p.h. The new Stanger is most comfortable, and impressed us very favourably from every point. It appeared, however, to be slightly under geared, but, notwithstanding, it attained a speed of 40 m.p.h. on the level without any attempt at letting it "all out."

Perhaps the machine's most attractive feature is the delightfully even torque of the engine; it is scarcely possible to distinguish the separate explosions at speeds above 20 m.p.h. This fact, too, combined with a comfortable riding position, makes it very stable on greasy roads or wet city streets.

At the end of the trial it was driven back to Tottenham, and on reaching Enfield an extremely dense fog was encountered. This necessitated driving at times on second speed below 10 m.p.h. and on top speed from 15 to 12 m.p.h., and, unpleasant though it was, it served to show what the Stanger would do at slow speeds. As before mentioned, although it would not be right to say that four-stroking was entirely absent, it was certainly far less noticeable than in any two-stroke we have yet tried, and the slow running in top gear was by no means uncomfortable.

Looking back over the week-end, we find that there are very few points, if any, in which .the Stanger can be criticised. It is unconventional but by no means freakish, and a machine which, in our opinion, deserves to be more widely known and to enjoy increasing popularity. The Stanger two- stroke has appeared several times in reliability trials during the past season, and on each occasion has acquitted itself remarkably well.