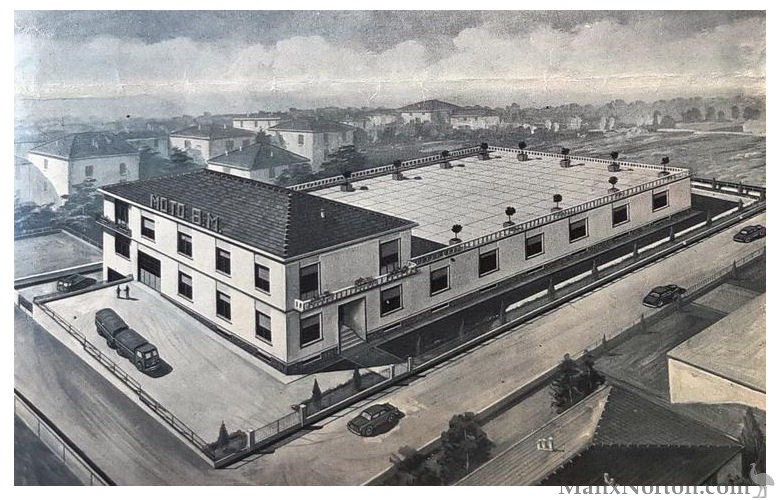 The Bonvinci Marino company was founded in 1952 by Mario Bonvicini in Rastignano Pianoro, Bologna. The factory address was via p. orlandi.

Mario Bonvicini (b. Granarolo dell'Emilia 1903 - d. Bologna 1986) had been a successful motorcycle racer in the years 1926 to 1930. He won the Astico-Brenta and the Tre Valli Varesine in 1926, and the following year he competed in the Giro d'Italia, gaining second place in the first stage, and was tenth in the Giro del Veneto.

The first motorcycles he produced had engines from JLO. From 1953 to 1955 the company built a 75cc Lusso model with a four-stroke engine and four-speed gearbox and a 100cc Gran Turismo Lusso four-stroke was powered by an NSU Fox engine, and they quite possibly used other powerplants from the German firm.[1] Production included 50cc and 175cc racing machines with frames by Verlicchi.

In 1956 they added 48cc mopeds in various versions and a scooterino two-stroke of 75cc, a 150cc four-stroke with four-speed gearbox, and a 75cc motocarro.

In the seventies their mopeds included the Zebretta and the Dai Dai; the Jaguarino Tourismo, Sports, Cross and Cross Special equipped with Franco Morini engines; the Velocino with 10 inch wheels; the Gambalesta, and the Wally.

The Amico moped from this period had a Minarelli engine, as did the the Pokerino scooter.

In the early eighties production was limited to a few models, all powered by 50cc Franco Morini engines. These included the P6 Enduro, and the KS 50 Sports equipped with a six-speed gearbox and front disc brake.

Bonvinci also built the Yankee Boss for Yankee Motors of Schenectady, New York, and some of the factory output was marketed in Germany under the Tornax banner. These included the Franco Morini-powered TS80 (road) and RX80 (enduro) which were also sold under the Kosmos brand.

The Pokerino was marketed by Negrini as the Farfallino and by Beta as the Cignono.

Notes
1. Some sources claim BM fitted a 250 OHC engine of their own design, but it is very possible that this was an NSU engine - if there was one at all. There appears to be no record of a 250cc BM.

26-Jan-2021
domibonvicini at hotmail.fr
JAGUARINO
Bonjour Je suis passionné de motos depuis les années 68 /69 .J ai découvert trés tard qu'une marque avait existée en Italie... du même nom que le mien BONVICINI . Alors, pour mes 60 ans, mes amis m'en ont offert une , trés belle, achetée dans un musée en hollande. Il s'agit d'un JAGUARINO. 4 ans aprés, ma maison a brûlée entièrement ...et mon BM a sérieusement souffert . j'ai entrepris derniérement de le restaurer et cherche entre autre 2 roues , 1 circuit élèctrique complet, les pneus, les feux, cables et commodos, ainsi qu'une selle biplace noire avec le petit dosseret j'ai fait repeindre le cadre et les tôleries et vais la remonter au fur et à mesure . SVP , Pouvez vous m'indiquer une ou des adresses de fournisseurs pour ces articles ,( En Italie ou en france ) D'avance, merci infiniment !
Hello I have been passionate about motorcycles since the years 68/69. I discovered very late that a brand had existed in Italy ... of the same name as mine BONVICINI. So, for my 60th birthday, my friends gave me one, very beautiful, bought in a museum in Holland. It is a JAGUARINO. 4 years later, my house burned down completely ... and my BM suffered seriously. I recently undertook to restore it and am looking, among other things, 2 wheels, 1 complete electrical circuit, tires, lights, cables and controls, as well as a black two-seater saddle with the small backrest I had the frame and them repainted. sheet metal work and will reassemble it as you go. Please, can you give me one or more supplier addresses for these items, (in Italy or France) In advance, thank you very much!
Dominique BONVICINI, ORSAY Tel
France 30-Jun-2020
benvanlancker at hotmail.com
BM bologna
Hello, i own a BM, i bought it as being a BM bonvicini.
I have done some research and think its actually a BM sport.
Framenumber starts with BM/S ...
Motor is Minarelli P4 SS
All info to help me identify this motorcycle is welcome.
Ben Van Lancker
België 19-Mar-2020
bernd_ritter at hotmail.com
moto bm
hi, i just bought a frame "moto bm, type E6, 1981" but i dont find any informations about this bike. can u give me any informations about it? i want to rebuild it, but... have no idea how it looked like. i just own the frame
bernd ritter
bavaria germany 16-Dec-2019
pierre53 at gmx.fr
BONIVICINI
hello, I am looking for the manufacturer identification sheet for a Bonivicini zembretta 50 cc N° BMIN 04325 year 1976, as well as the technical documentation. Thank you
PIERRE CORNU
France
Thu, 19 Oct 2017
kurt-warm at t-online.de
BONVICINI B.M. Moto Bologna Gyromat Mini 1974

Hallo, I got possession of an nice little red Motocycle BONVICINI B M. Moto Bologna at 1974. The Typ is "Gyromat Mini" with 50 ccm, manufactured by Morini (?).Unfortunately I did not have any papers , direction for use, instrutions , and traffic permission. Can anybody help me to find this? Thankyou for watching-
Kurt Warm
Falkensee near Berlin Germany

Thu, 05 Oct 2017
a.j.cowie at outlook.com
BM Moto Jaguarino, 1960
Hi I'm looking for a toolbox/storage compartment for a BM Moto Jaguarino. Could you advise anybody who might have one? Bets regards. Andy.
Andy
Leicester United Kingdom
Fri Jun 23 2017
Crippsjimpat at aol.com
BM POKERINO
Bonvicini Marino 50cc Pokerino
Hi, looking for the side panels for a 1963 BM 50cc Pokerino
Scooter - the only missing parts!!! Please, thank you Jim (UK)
SS69RY
Mon Jun 12 2017
A.j.cowie at outlook.com
Bonvicini, BM Moto Possibly Jaguarino
Hi. I've recently purchased a 50cc Bonvicini but unsure of the model or mich else about this bike (other than the very useful information on your website). Frame number starts "BMA -" and 4 numbers which are slightly illegible at this time. Motor is a Motori Franco with markings shown in images. Could you please tell me more about this bike (model, production year etc). Could you also advise anyone for spare parts and can provide a dating certificate? Many thanks. Andy.
Leicester

BM-50cc-AJC-01.jpg and others in Comments

Sun Sep 27 2015
iron_giant at hotmail.com
Bike Identification
Bonvicini Marino Boss mini bike
Picking this up tomorrow & was curious about any info you might be able to provide
Waterville, Maine
English

Sun Apr 26 2015
lcb4bb at gmail.com
Help
moto bm motor minereli
I have a cool little bike and need a service manual for it and have no idea where to find one. Please contact me at 5405993397. I would love to have this Italian 80's Jewel running good.
pembroke, va
.........
From FB Jan 2017:
Hello I wanted to point out that this moped is a BM Bonvicini transport model, with engine FB Minarelli 3-speed transmission with forced cooling. I might add that all bikes and mopeds bm bonvicini, although the brand on the engine bm bonvicini in reality engines are fbm, fb minarelli, and franco morini motori engines.

Mon Aug 26 2013
gerald-abratique<at> yahoo.com
Help
n/a n/a
Please help, can you guys tell me something about it? model? year? any useful info about it. thanks!

Sun Dec 25 2011
evis333<at>hotmail.com
Moto BM Bologna
Moto BM Bologna B.M Holiday Duomatic
Hello, I have a bike that i think is B.M Bonvoncini. On the side says B.M Duomatic, and on the other side Moto B.M Bologna
The frame # is MOTO BM/TK*0607*
Any information you may have will be very help-full
l will up load some pictures
Thank you
Evis
Cyprus

Sun Oct 17 2010
arnautsfre<at>gmail.com
Moto BM
Hello,
A week ago, I found this motorcycle. I will repear it, but I don't now exactly the real and correct name of the bike. I think Moto BM bologna
But i don't now it exactly.
Also I could'nt find information about it on the internet.
Can you please help me?
Sorry for the bad picture, but I don't have a better one :)
Thanks in advance, and I hope the hear something from you soon.

Wed May 20 2009
cjsummerfield at hotmail dot com
Information concerning "boss" mini bike
Bonvicini? Moto BM?
I was given a mini bike and I was hoping to get an idea of how much it is worth. It reads "Moto BM Bologna Italy" on the side of the motor and the back of the seat. It was made by Bonvicini and it is called "boss". I have the owners manual and the motor is a Motori Morini Franco (super sport turbo 48cc). The bike is in fair/good condition and runs awesome. Can someone help me with its value? Thank you.
MI

Mon Mar 31 2008
dieseleye at gmail dot com
question
moto bm unknown
do you know anything about this bike? It says moto bm on back of seat and motor. Thank you, Mike
buffalo, ny