The Mother of Invention

In 1886 Édouard Sarazin, who had been friends with both Gottlieb Daimler and Wilhelm Maybach for some time and had taken a keen interest in developments, formed an agreement to market Daimler products in France.

He then began talks with another friend, Émile Levassor, and his business partner René Panhard.

Before either agreement could be properly formalised, Édouard Sarazin developed a serious illness. On the 24th of December 1887, he died. He was 47.

On his deathbed he said to his wife Louise, "In your own interests, and for the good of our children, I recommend that you maintain the business connection with Daimler. His invention is entirely trustworthy, and it will have a future, the magnitude of which we cannot begin to imagine today."1. He also asked that she maintain the relationship with Levassor and Panhard.

Louise wrote to Gottlieb Daimler offering to take the helm whilst he sought a replacement for Édouard, to which Gottlieb replied in a most gentlemanly fashion that "...you will remain involved in the business, even if I am unable to say exactly how. At any rate, I shall not undertake anything in the near future without first seeking your advice."2

She then communicated with Émile Levassor that he should continue work on development of the Daimler engines, and travelled to Cannstatt (near Stuttgart) to meet with Daimler, returning to France with one of his latest engines. The following year (1888) both Louise and Émile travelled to Germany to meet with Gottleib, and a friendship between to the two men quickly developed.

During the trip Louise negotiated with Daimler to display his automobile and two motor launches at the Exposition Universelle, the world's fair held in Paris in 1899, the event for which the Eifel Tower had been built. The launches were displayed on the Seine and the Daimler stand proved to be a major attraction.

René and Émile drove in the four-wheeled Daimler Stahlradwagen for the first time, and this convinced them that the automobile was the direction they should take.

In February 1889 an agreement was reached between all parties which left Louise with 8 percent of the sale price of all Daimler engines sold in France. 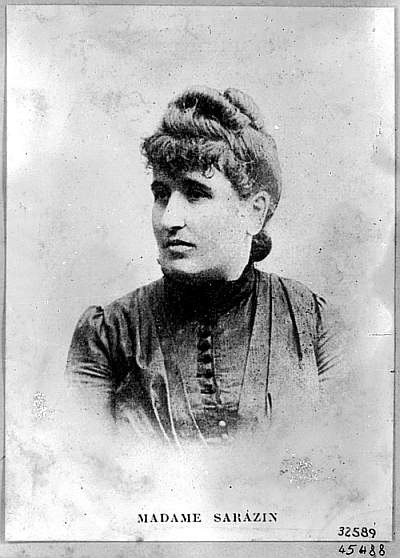 Whilst the friendship and trust between the business partners deepened, the relationship between Louise and Émile Levassor went a step further. They married in 1890, and she became Madame Sarazin-Levassor.

The first automobile race in history was held on 1894; of 22 entrants 15 finished, 9 of which were Panhard & Levassor machines with Daimler engines.

During the Paris-Marseille-Paris race held in September 1896, Émile was injured when thrown from the vehicle when he swerved to miss a dog, dislodging a tyre. He was hospitalised for two weeks with various broken bits, refused to rest further and returned to his workaholic practices. Six months later he suffered a brain embolism and died on the 14th April 1897, aged 54.

Louise Levassor-Sarazin was once more a widow. She now owned both the Daimler rights for France and a large portion of the Panhard & Levassor company. Discussions were held with René Panhard, a new company was formed, and an equitable arrangement ensued. In heartbreaking circumstances she had become a wealthy woman - although in later years she had to fight hard to maintain the income.

The Levassor & De Boisse was displayed at the 1900 World Fair, an enormous event covering 216 hectares and visited by over 48 million people.

Jacques de Boisse presented his first vehicle in 1900, financed and possibly inspired by Madame Sarazin-Levassor. The machine was built by Panhard-Levassor.

Notes
(1) Daimler.com
(2) Ibid
(3) Daimler's motor bicycle is widely claimed to the the first, but Enrico Bernardi of Italy patented and built a petrol tricycle in 1882. wikipedia.org
(4) Louise and her first husband, Auguste Édouard Sarazin, had three children, a girl and two boys, one named Auguste Henri Sarazin-Levassor. His daughter Lydie Sarazin-Levassor became a writer of some note. At the age of 27 she married a man who was to become one of the most celebrated artists of the twentieth century, Marcel Duchamp.
Two of the images of the tricar are by famed photographer Jules Beau (1864-1932). The identity of the woman and the girl in the photographs are unknown.