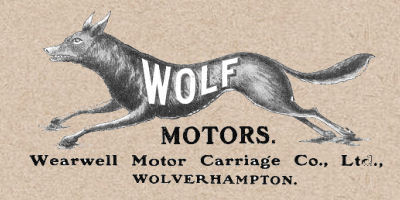 Wolf two-strokes were marketed in the Netherlands by Meijer under probably three names from 1931 to about 1936 - None Better, New Rapid, and Meijer.

19-May-2020
raandaka a t internode.on.net
Wolf
Hi, While sorting through my late father inlaws motorcycle parts I came across what appears to be an very early Wolf motorbike petrol tank. It has the Wolf emblem still on the tank. I can not find any similar tanks or information in regard to this and hope you may assist.
randolph albrecht

I have two frames and engines. One is restorable. No frame number, but engine number is 7689 and ?987. One gearbox number 7848. Missing part of exhaust, and some parts of the carburettor. Villiers 148cc engine. Need to know as much as possible! 2 images included
Ketil Juul Olsen
Kristiansand Norway

I am writing to You about motorcycle from the link mentioned below :
https://cybermotorcycle.com/gallery/wolf/Wolf-1937-Vixen.htm

I will be more than grateful for any kind of information.

Thu Dec 11 2014
oldgit.tom at gmail.com
Wolf motorcycles
Wolf Wolf 500
Read many years ago: Wolf company apparently ended as part of the UK Co-op organization/movement, or maybe they just sold the finished product. Allegedly, a 500 model got a very good road-test report in a 1939 'Motorcycle' or 'Motorcycling' magazine! I'd guess Wolf was one of dozens of small firms assembling bikes from bought-in components. Most were swallowed by WWII weapons production boom. A Cambodian company seems unlikely, as it was then under French control. Maybe another outfit using a common name? But who knows?
SE Asia

Mon Mar 24 2008
noetics at hotmaildot com
Wolf Motorcycle
Wolf Vixen
Hello, I have just acquired what I have identified as a 1937 Wolf Vixen.  It uses a 148cc Villiers twin port engine with a 3 speed hand change Burman gearbox. Except for the speedo and speedo drive it is 100% complete.  It has been in dry storage for over 40 years and belonged to my friends grandfather.

Does anyone know much about these bikes and where I can find parts for the engine and gearbox? The chassis parts are not an issue, they are all in good nick, just need some cleaning.

Fri Jan 25 2008
timmi.t at gmx.at
Motorcycle
Remake Wolf Cambodia made 125 ccm Wolf
I've seen the Bike in Paris last week. ( 19.01.08). It was brand new, and the guy told me it was made in Cambodia. I can't find anything about a remade Wolf anywhere on the www.
Patmos, Greece

Sat Nov 24 2007
dw at davewolfedot com
New Company Called Wolf ?
Wolf Motorcycles Spain?
I am Sending a Inquiry about a NEW Wolf motorbike I ran across in Spain. I can't seem to find anyone making a bike under the name Wolf. Can anyone help find the company? -Dave Wolfe
Austin, Texas, US

Tue Dec 19 2006
g.viall at harcourts.co.nz
Wolf 1928/30
This is a Wolf I own. I was sold it as a 1928 however I think now that it may have parts off a number of similar vintage Wolfs. The frame is pre 1930 as it is not a loop frame and has a rear axle pivoting stand. There seems to be no information on machines made just prior to their closure in 1928/9. It seems to have been reengined with a Villiers 2E 196cc. Any info would be appreciated.
Auckland N.Z.

Wed Sep 27 2006
william.mccluney at ntlworlddot com
transfers/decals
Wolf Unit
Can anyone let us know where we can get some transfers (decals) for a 1937 Wolf Unit?
UK

Wed Nov 30 2005
john.turner17 at ntlworlddot com
Wolf motorcycles
Hi I have a motorcycle that i have been told could be a Wolf, it is fitted with a Villiers 9d engine and has the twin exhausts comming out of the back of cylinder.
Engine No AAA7896. No on frame 198698. can you help please.
Thanks john.

Tue Oct 11 2005
pam.dejonge at bigponddot com
wolf ioe motor
have you any info on such an engine. year they were made. h.p. cc.s. nos made. built by A J Stevens I believe.