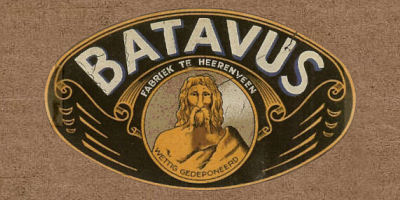 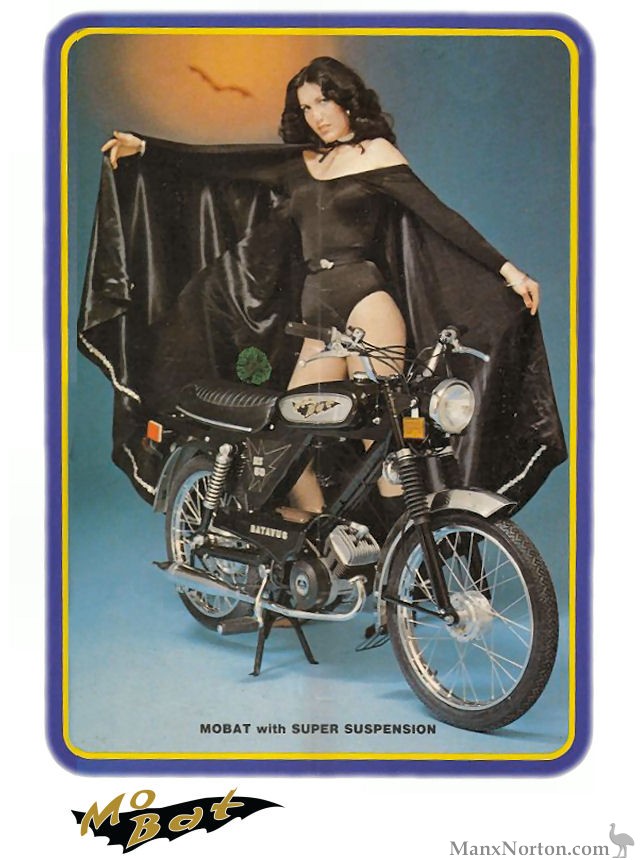 Batavus is the leading manufacturer of bicycles and mopeds in Holland, a country which has more than two million mopeds on the roads. The company originated in 1904, when Andries Gasstra opened a shop in Heereveen, selling clocks, watches and sewing machines. Bicycles were soon added to the catalogue as two-wheeled transport gained in popularity, and the original business was discontinued when Gastra acquired the sole Dutch representation for the German bicycle, Presto. He later started selling bicycles under his own brand name, Batavus.

In the 30's, Batavus began making three-wheeled transport bicycles equipping them with an engine a few years later. At the same time they produced their first motor cycles. By 1940, when Holland was invaded, Batavus employed some 120 people.

Post-War, the company made rapid strides and a new project which had started out as a bicycle with a motor was soon developed into a functionally designed motorised two-wheeler, with front and rear-wheel suspension for riding comfort and a creditable performance. Long-distance rides on Batavus machines through the United Stats and to places like Morocco, Alexandria and Baghdad helped to popularise the name outside Holland.

By 1954 the company was operating from an assortment of buildings, producing a variety of machines. In 1956, some 52 years after Andries Gasstra opened his shop, a new factory was established in the industrial park in Heerenveen. The factory had an area of 6000 square meters and the workforce had grown to 300. Further extensions and developments became necessary and by 1977 the company employed about 650 people in a modern factory using advanced design and manufacturing techniques. After the new premises were opened the company continued primarily to be a bicycle manufacturer and benefited from the growing demand for bicycles, not only in Holland, but all over the world. However, in 1969, Batavus acquired the bicycle and motor-cycle production of another Dutch company, Magneet, and in the following year took over an amalgamation of three famous three-wheeler factories in Germany. Although their sales of motorised two-wheelers were subjected to increasing fluctuation, with various model and style changes, there was steady growth every year. At this point Batavus were producing more bicycles and mopeds than any other company in the Netherlands.

They were then the largest Dutch exporter of machines, with 55 percent of their total production going outside Holland. As early as 1972 their annual production of bicycles was 250,000 and that of mopeds 60,000. Of these, 60,000 bicycles and 27,000 mopeds were exported. Sales were particularly strong in West Germany and the company also did well in Switzerland. Other important outlets were Iran, Israel, Belgium and Greece. In Turkey, Batavus mopeds began to be manufactured under license in 1972.

In 1970, Batavus joined the Dutch Laura industrial group, which includes Laura Motoren, and Laura engines were subsequently fitted to all Batavus mopeds in the UK, except for the Sachs-powered sports machine, the Mk 4S. First imports to the UK were in 1973, with the setting up of Harglo Ltd by two former BSA/Triumph executives, Wilf Harrision and Peter Glover. Their primary function as sole concessionaires to Batavus was to import and distribute Batavus mopeds in the UK and Ireland.

The early Go-Go V was a rigid-frame machine, and following the introduction of the Go-Go VA four new machines were added to the UK market in 1974 and two more in 1976. The company established a reputation for the manufacture of good quality, well made and well finished machines, which, while not the cheapest, were both reliable and attractive.

At the 1976 Earls Court Show in London, Batavus showed their seven-model range; six of those machines were powered by the now well-known 48cc Laura engine, with V-belt primary drive and automatic clutch. The exception was the top-of-the-range Mk 4S, being the Rolls-Royce of sports mopeds with motor-cycle styling and the famous Sachs four-speed power unit. Specifications for that machine include an electronic tachometer, battery-operated turn signals and heavy-duty suspension front and rear. This model, which has the overall dimensions of a full-sized motorcycle is the biggest machine sold by Batavus who are essentially bicycle and moped manufacturers. The HS 50, although still incorporating a 48cc engine, also has motorcycle styling with the tank positioned between the knees. This model is of Anglo-Dutch design and was built by Batavus to a Harglo specification for the British market. Its success resulted in the machine being introduced into several other Common Market countries, including the Netherlands. For some time the Batavus range was based on the popular Go-Go model. From this was later developed a two-seater version, the Go-Go 2, and the Starglo, an economy priced version of the single-seater Go-Go and considered by many authorities to be one of the best machines ever to come out of Holland. A stylish machine at a competitive price, the Starglo was impressively finished and had a tireless performance.

In addition to the Go-Go VA, a single-seater luxury moped, the Batavus range included the Bronco, built on semi-chopper lines with a high-rising back to the seat and motocross style handlebars, and the Compact, a small-wheeler with heavy-duty frame and forks.

Apart from the top-of-the-range Mk 4S (which is powered by a Fichtel & Sachs engine), the Batavus mopeds use Laura engines of 48cc; these two-stroke units produce 2.4bhp.

The Batavus VA Deluxe model has front and rear turn signals and a battery attached to the carrier rack in the rear.

Batavus mopeds were made in Holland by the Batavus Intercycle Corporation, and there were three models available in the United States. The power plant of all three models is the 48cc Laura engine, and the fuel consumption of all three is approximately 150 miles per gallon. All weigh in at about 105 pounds. Each of the three has a tubular steel frame, a suspension system of telescopic shock absorbers in the rear, and stainless steel mudguards in both the front and back. Each comes with an illuminated speedometer/odometer, electric horn, lockable steering, and 16-inch Michelin moped tires. The VA Standard is available in four colours (red, yellow, orange, and violet), has a .95-gallon-capacity fuel tank, and currently retails for about $429. The VA Deluxe model has all the features of the Standard, and it also has front and rear turn signals and a small battery attached to the carrier rack in the rear. The Deluxe sells for about $459. At the top of the Batavus line is the Model HS50, the only moped manufactured that used the motorcycle style tank and seat design-the only moped on the market that defies the step-through frame design. Tank capacity of the HS50, due to the unusual tank positioning, is greater than that of almost any other moped. The HS50 can hold 1.3 gallons of fuel. Like the VA deluxe, the HS50 is equipped with turn signals in the front and rear, and it has a rack-mounted battery. The HS-50 was available only in red, and the cost of the model was about $475.

Heerenveen, Holland, Home of BATAVUS INTER-CYCLE, a member of the strong Laura Industrial Group. Here, thousands of miles from America, 700 dedicated craftsman assemble 70,000 BATAVUS MoPeds and 250,000 bicycles a year. Erected in 1904, this impressive structure covers over 350,000 square feet and houses the largest, most modern MoPed / bicycle manufacturer in Holland.

US Sales Literature: "It's appropriate that this innovative two-wheeler is a product of the Netherlands as cycling has long been a popular tradition there. The motorized bicycle from Holland has arrived on the American transportation scene. Fuel is increasingly scarce, and increasingly expensive. So the 150 miles per gallon economy of the Batavus MoPed has found instant acceptance in America, as an economical machine that's also fun to ride. To serve this booming American Market, BATAVUS USA is headquartered in Atlanta, with regional warehouses across the country, creating a strong international reach for stateside customers."

Batavus has been making small motorcycles and mopeds since at least the 1930's and began exporting mopeds to the UK and North America in the early 1970's.

Much has been borrowed from several old motorcycle and moped books, and Batavus advertising literature.
* thanks to Rodney Beese for this info.