A MOTOR-CAR FOR ONE : THE MORETTE.

Motoring is no longer to remain the sport of the privileged few. Slowly but surely the means of mechanical progression are being brought within the purchasing powers of the many. Our illustration shows the motor in its latest form : a species of motor-tricycle for one.

B. E. Dickinson (1862-1905), a colliery manager in Rawmarsh UK, around 1900 purchased Coombs Manufacturing of Birmingham which manufactured lamps and lanterns, and soon became a supplier of cycle hubs. In 1901 he produced the first Morette, powered most likely by an Ixion engine.

The machine took the form of a bath-chair and had a single front wheel, which carried, and was driven by, the engine, with friction drive to the front tyre. The earliest versions had a two-stroke engine, later to be replaced with a 2½ hp four-stroke Morette, positioned on the left of the wheel. Transmission was a mixture of flywheel friction and then chain to the hub. The starting mechanism was via a pull-cord from the seat.

In 1902 there was also a heavier, 4hp twin-cylinder version, with a slightly different transmission system.

Dickinson shared a stand at the 1903 motor show with Primus Motor Manufacturing, who were selling Ixion engines, and these appear very similar to that fitted to the first Morette. Also in 1903 he developed the second model fitted with a single cylinder copy of the Clément engine.

In 1904 a model fitted with a 4hp V-twin Clément appeared.

Late in 1904 Lovell Johnson (manager of Iver Johnson in Fitchburg Massachusetts) visited the UK and in all likelyhood purchased a Morette and brought it back to the factory in the United States. It is thought that this was mothballed after the engine failed, reappearing half a century later. In 1956 the machine was found during a warehouse cleanup, and now appears at veteran motorcycle meetings.

Norton was on the same Aston Brook Street and their first motorcycle was powered by a Clement engine. 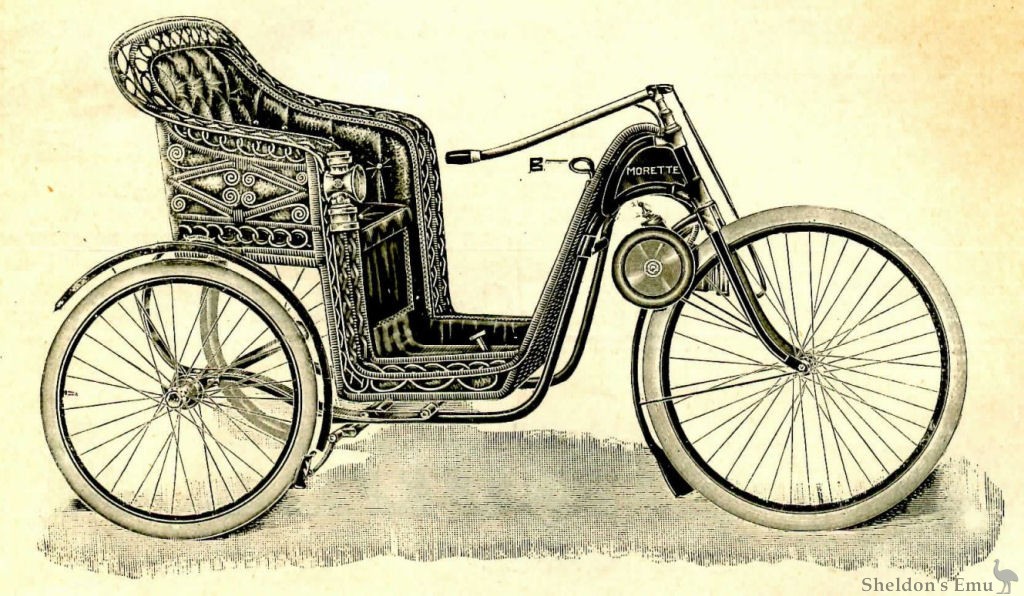 One of the latest novelties in the way of a light motor vehicle is the "Morette," made by Mr. B. E. Dickinson, of the Toledo Engineering Works, Birmingham. The " Morette" is a light, simple and elegant safety motor carriage, strongly built to carry one person up to 12 miles an hour. It is started from the seat by lever shown, and is steered, and the motor controlled, in the simplest manner by the tiller handle, and has a double-acting footbrake.

The doublé "Morette" is suitably strengthened in all parts to carry two persons, and a higher powered motor is used. The frame is built with 1 1/8 in. steel tubes strongly braced and strengthened to suit requirements, the attachments to the ball head and rear axle being strongly and carefully made. The front forks are also strongly built. The front wheel is a 28 inch wheel, fitted with 1¾ in. Swain tandem tyre for the single Morette, and 2 inch Swain motor tyre for the double Morette, the inner tube being a self-sealing air chamber. The rear wheels are 26 inches, and are also fitted with Swain tyres. The engine is a two-cycle valveless motor, the fly wheel of which carries on the inner side a rubber-covered driving wheel in frictional contact with the front tyre. The engine is carried by a bracket behind and attached to the crown of the front fork. It is carefully balanced on both sides of the wheel, and is lubricated on the drop-feed principle, the oil being atomised as it is carried into the engine with the petrol mixture. The cylinder of the engine when in action is inclined slightly upwards.

The well-known and reliable F. N. carburettor of the latest type is used, and petrol for a 70-mile run is carried in the tank over the engine. The catalytic system of ignition is employed. After starting the engine (by temporary electric current) the ignition afterwards is automatic, adopted after careful and satisfactory trials.

The engine is started by pulling the lever towards the seat. This lever operates through clutches on the hubs of the rear wheels, and at each pull impels the carriage forward. The driving pulley being in frictional contact with the front wheel is thereby rotated and the engine started.

The carriage is steered by the tiller handle shown. The position of handle, as shown (which is normal) represents the driving wheel of engine adjusted in proper running contact with the front tyre. By raising this handle the engine pulley is freed from contact with the front wheel, and by depressing tiller handle the running of the carriage may be slowed, or, if necessary, the engine may be entirely stopped. In an emergency the double-acting foot-brake shown may also be used to stop the vehicle. A 1½ h.p. engine is fitted to the single Morette and this is all that is required for running on a level and easy hill cHmbing. Where more power and speed is desired a 2½ h.p. engine can be fitted. The double Morette is fitted with a 2½ h.p. h.p. engine. When a very steep hill is met with the driver may walk alongside the carriage and operate engine at will to take the vehicle to the top.

Engine vibration is considerably reduced as the tyre absorbs a large proportion of this, and at the point where the engine is attached to the bracket special vulcanized sheet rubber is interposed to intercept the vibration to the frame.

The total weight of the vehicle including motor and fittings is about 90 lbs.


07-Jul-2018
rcrdfdmn at gmail.com
1903 Dickenson Morette
I have the 1903 single cylinder. A copy of the Clement engine was used. Soon after they came up with a V2 version that I believe was a Clement. I have the only one. If I could locate an engine, I would build the frame. Any suggestions? These were made in Birmingham
Richard T Friedman
United States