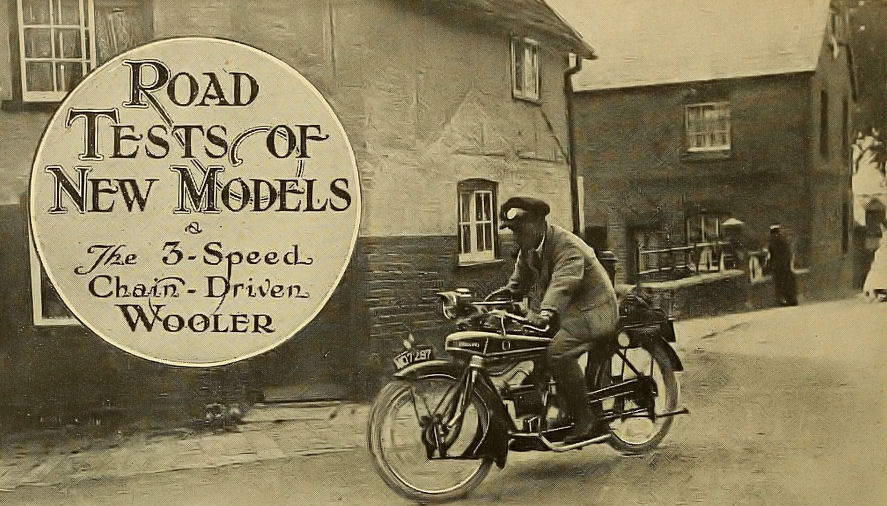 THE new chain-driven Wooler came into our hands a few days prior to this year's T.T., and was used for some time after it had been to, and had returned from, the Isle of Man. One reason for choosing this mount for the journey to the classic races was due to the fact that it is a machine of moderate weight, and yet one of a very fair average speed on long journeys. Only those who have taken a motor cycle over to the Island know how important the weight factor is when lifting the machine from the steamer to the quay at Douglas.

For the journey from London to Liverpool (via Birkenhead) the route through Berkhamsted, Aylesbury, and so on south of Birmingham, was chosen in preference to the main Holyhead Road-Watling Street way, which is very rough in parts, and on the morning we set out a furious north-westerly gale was blowing, thus compelling a head wind to be faced for practically the entire journey.

On the whole, the road was exceedingly good, but where rough patches were traversed the springing of the frame was greatly appreciated.

The little machine was heavily laden with a bag containing all that was necessary for a week away from home, but, notwithstanding the weight carried and the fearful wind, quite a good average was made. After Aylesbury, Akerman Street that fine old Roman road which passes through the fertile parts of Buckinghamshire and Oxfordshire, so famed for its dairy produce was followed. Owing to the number of milk-carts passed at different times, on this highway, a certain rider of our acquaintance aptly named it " The Milky Way."


Our journey continued through, Bicester and Stratford-on-Avon, but, when more hilly parts of the country were encountered, a slight slipping of the clutch was experienced, which could not be cured by external adjustment. However, the clutch held well enough to drive if reasonable care were used ; this notwithstanding, a very fair average was kept up all the way to Birkenhead, which was reached via Droitwich, Kidderminster, Bridgnorth, and Chester. The ferry from Birkenhead to Liverpool is quite excellent from the motor cyclist's point of view, for the service is frequent and the cost only a matter of pence.

During the 190-mile journey the machine had demonstrated that its steering was excellent, and that the riding position was comfortable. It was good at cornering, capable of very nearly 30 m.p.h. average on level roads, and practically vibrationless; like most units of its type, the engine depends upon revolutions for its power, and if there is doubt about climbing a hill on top speed it pays to change early down to second, when up to 25 or even 30 m.p.h. may be attained.

As regards trouble on the road, apart from the clutch slip (which was afterwards found to be due to a bad batch of springs) and a broken plug, there was none : and the journey, including stops for meals, etc., was accomplished easily in ten hours. In the Isle of Man itself the machine gave splendid service. Another test to which the Wooler was put was the Interteam Trial for The Motor Cycle Cup, when it was taken round the course and climbed every hill successfully. This latter excursion was far more trying to the machine than the other 300 miles, and despite the rough roads and steep gradients, it proved itself to be a handy, reliable little mount.

From the point of view of adverse criticism, the chief objection is against the carburetter, which was reminiscent of earlier days in that it required too much manipulation of the, air lever to obtain flexibility and even running. Valve noise was also rather prominent. The lubrication appears to be perfect, and. little could be said against the method of changing speed, which is accomplished by the foot, though a stronger spring against the plunger locking the second gear would be desirable. The machine is full of interesting points, and its designer, Mr. Wooler, has embodied many ingenious features. The unit construction of engine and gear box is worthy of favourable comment. Small details have been carefully considered ; for example, the position of the speedometer dial on the front forks, so that it is illuminated at night by the air holes at the base of the lamp, is a case in point.

If you have a query about Wooler Motorcycles please contact us