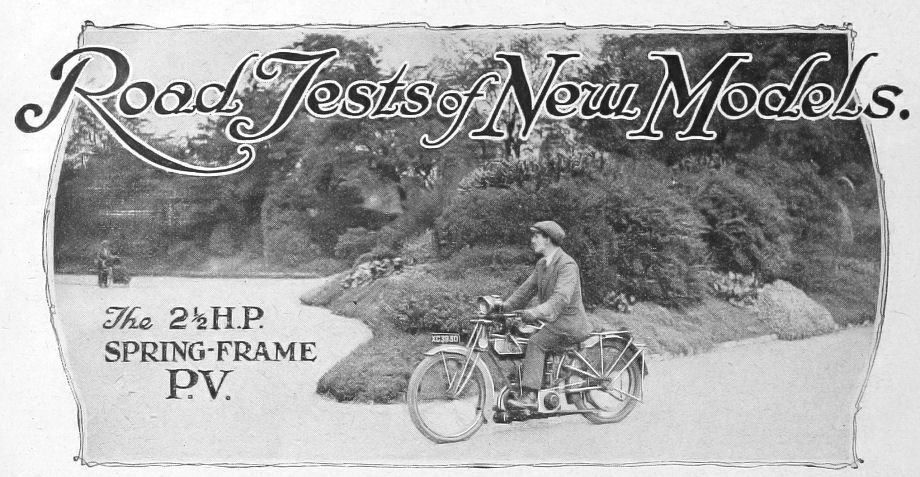 THE P.V. was a pioneer amongst lightweight spring frames, and the detail improvements which have been made were incorporated more to facilitate the adjustment and long wearing qualities of the mechanism than to increase its efficiency.

The construction of the springing system, which the makers claim eliminates all lateral play, is exceptionally simple. The rear wheel is carried in a fork which is pivoted at the rear fork end lugs of the chain stays; this fork terminates in a peg which passes through a slot in the saddle, tube and engages with a cylindrical fibre block. (The strength of the saddle tube is considerably reduced, but this is compensated by the use of heavier gauge tubing and lugs.) A coil spring is located above and below the fibre block, the upper one acting as a recoil spring.

The main spring can be removed and another fitted with ease, merely by taking out the plug at the bottom of the saddle pillar tube.

The machine which we were to take upon test was equipped with a 2 3/4 h.p. Villiers engine.

Details of the P.V. spring frame :
(A) The floating member
(C) Housing for the coil springs
(D) The cover concealing the slot in the saddle tube
(G) Adjustment for the springs

A preliminary inspection of the controls and equipment completed, which latter we would say was more adequate than that supplied with many new machines, the engine was started, and, engaging the clutch, the machine took up the drive sweetly, and rapidly accelerated on but a small movement of the throttle.

Although scorned by a number of "big twin" speedmen, there are many points in favour of the two-stroke light-weight, notably smoothness of torque and ease and simplicity of control.

Value of a Good Clutch.

Negotiating traffic in the South-west of London without, constantly changing down necessitates much work for the clutch, and if it is sensitive to the slightest movement of the finger, as we found was the case with the Burman, much time and inconvenience are saved. So far as the two-speed box is concerned, when once out of the dense traffic, the lower gear may be regarded as a superfluous luxury.

Happy to leave the London streets well in the rear, the long strip of road from the Metropolis towards Guildford and the coast  instinctively encouraged a wider throttle opening. A " B. and B." carburetter is fitted, and with both air and throttle barrels wide open the machine had a remarkable turn of speed for its engine capacity.

The 2 3/4 h.p. spring frame P.V., one of the most comfortable lightweights on the road

When one has traversed a bad piece of road many times, a definite channel, where the most violent road shocks can be avoided, is instinctively chosen.

The ability to disregard this chosen route without the anticipated jolting in the saddle most effectively demonstrates the efficiency of a spring frame. This was our experience with the P.V. The rear springing is most effective, whilst if is not, as in many designs, too sensitive. It has the added merit of being quite simple.

Later, turning left off the main Portsmouth Road, and ascending the famous Newlands Corner, which has a gradient of about 1 in 9, we again found no necessity to change to the lower gear although a corner at the bottom of the hill reduces one's speed considerably ; the engine accelerated rapidly, and, halting at the top to make an inspection, we found it exceptionally cool.

The appearance of the machine is pleasing, whilst the compact disposition of the various units gives one the impression of easy accessibility. Incidentally, petrol consumption was in the neighbourhood of 70 to 80 m.p.g.

Other models manufactured by P.V. Motor Cycles, Ltd., and all embodying the same springing system, are a special ladies' model with a cut-away tank, a 2 3/4 h.p. J.A.P.-engined model, and a 5-6 h.p. J.A.P.-engined dual-purpose mount, equipped with a P.V. spring frame and a sidecar.