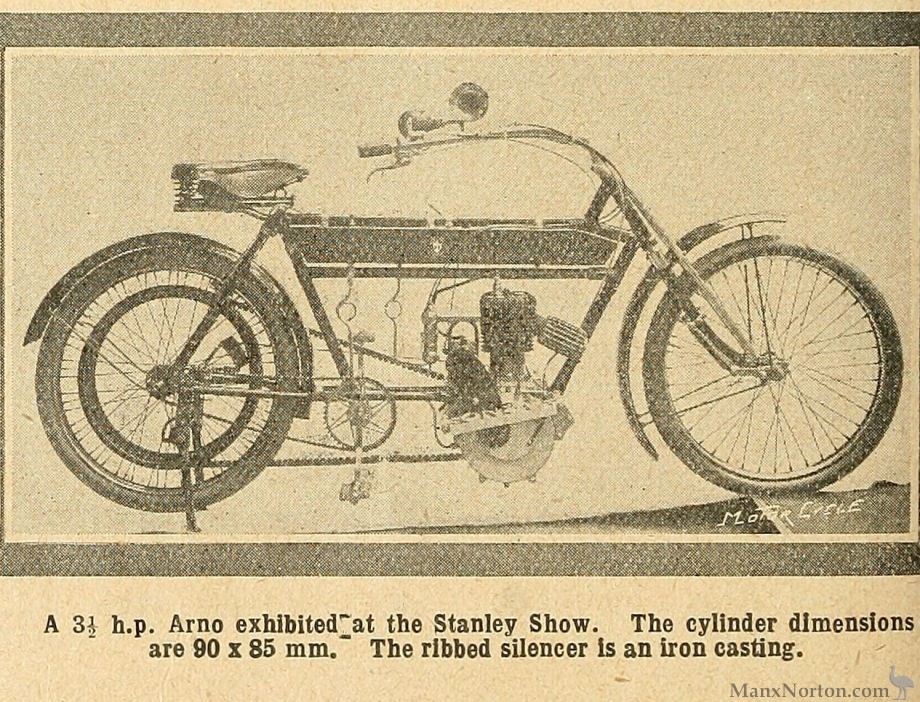 This Company is a comparatively new one in the motor industry, and they have certainly begun well, for they are showing a very neat motor cycle and a very carefully thought out car. The bicycle has a 3 H.P. vertical engine, the drive is by belt, the carburetter an " Amac," with 'handle-bar control, and the ignition by Bosch magneto. A special feature of the machine is that the crank bracket can be entirely removed if desired, by the removal of a single bolt. Wide aluminium foot-rests are fitted at each side of the engine. The complete machine, with all fittings, retails at £45. The car is a 20-25 H.P.; it has a 4-cylinder White and Poppe engine, and a White and Poppe carburetter is also used, so the flexibility of the car can be relied on. The change speed is operated by an ingenious combination of a straight through quadrant and gate. There are two short quadrants, between which the change lever stands, and the latter can be rocked, so that it engages with either one quadrant or the other. The quadrants are cut with what practically .amounts to long, sloping teeth, so that the lever is pushed right home against a dead stop in changing, and the whole arrangement is, of course, narrower and rather neater than the average gate. The rear springs and the rear ends of the front springs are mounted on slides instead of shackles. There are three cast steel rollers in each slide, and this design is claimed to give particularly easy springing. As the whole control is simple and easy to handle, the " Arno" should be a suitable car for a lady.

This company exhibit for the first time at any show the Arno single-cylinder motor bicycle. The frame is built specially low, with long straight chain stays extending direct from crank chamber to rear forks, with the exception of the one crank for the belt rim The bracket for pedal axle is detachable to enable riders who prefer a pedalless machine to remove the pedal gear entirely and leave no trace of it having been fitted. The ball socket is a particularly strong piece of work, and, although the frame is very low, the length of the steering socket is not reduced in any way. Spring forks are provided, and the forks are also stayed with girder tubes. The engine (which is made throughout at the Arno Motor Co.'s Coventry works) has a bore of 90 mm. and a stroke of 85 mm., with Hoffmann ball bearings to the crank shaft. The silencer consists of a separate casting, which fits over the exhaust tube, the latter being diilled with a number of fine holes, the final exhaust release taking place underneath the outer casting, and somewhat to the left-hand side. The ignition is by a Bosch chain-driven magneto machine, the magneto being fitted behind the engine on a bedplate cast with the rear half of the cradle. The carburetter is an Amac with handle-bar control. Neat metal footrests are fitted, with the name Arno embossed upon them, the raised lettering giving a good grip to the sole of the boot.

Mr. Hammon, who is responsible for the design and production of this machine, was also the maker of the Clarendon motor bicycles, a number of which are still running and giving every satisfaction to their owners.