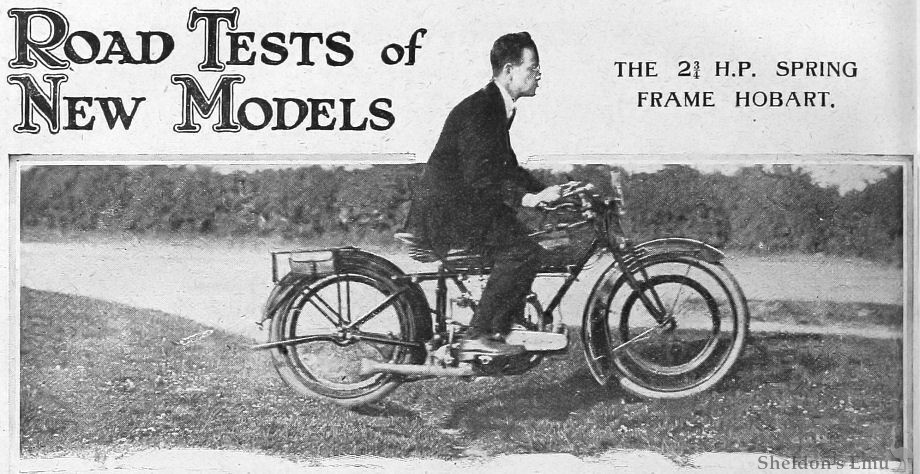 In addition to trials on "pot-holed" roads, the spring frame was severely tested by riding over deep cross-gulleys at a fair speed. This feat would have been impossible with a similar rigid-framed mount.

Although affording a riding position several inches lower than the average, the sporting model spring frame Hobart has a well-balanced and pleasing appearance

CONSIDERING the undoubted advantages of the spring-frame, it occasions some surprise on the part of many of our readers that the rigid type frame still continues to predominate. The reasons for this are many, and among them may be mentioned (i) the extra cost, which the majority of manufacturers do not feel justified in asking the public to pay at the present time ; (2) th.s possibility of laterab play developing ; (3) the extra weight ; (4) the lower output due to the increased amount of labour for the additional units; (5) the difficulties of design; and (6) the majority of makers are not forced to consider the m.atter, because competitors who supply spring frames are in the minority.

Added to the above factors there is also the fact that there are now a large number of auxiliary suspension devices which successfully damp put road shocks so far as the rider is concerned. However successful these devices may be, they do not fulfil the proper functions of a spring frame in saving the machine from the ill-effects accruing from vibration.

The Question of Weight.

At a time when weight reduction is receiving the consideration due to it, the spring frame proposition is often dismissed on account of its extra weight ; but, with a correctly designed spring frame, the weight should not exceed that of a rigid frame for the reason that, since the machine is not subjected to the same road shocks, the amount of metal need not be so great. A32

For years manufacturers have been piling on weight I in strengthening up their frames by adding more metal. In many cases the strength is obtained by sheer mass of metal rather than scientific design.

Another factor which has retarded the development! of the spring frame is the popularity of the sidecar. If a machine has to be used with an attachment, the springing problem becomes more difficult than is the case with a purely solo mount.

In this latter type the 2 3/4 h.p. Hobart spring frame model is an excellent example of what can be obtained without undue complication and added weight. Here we have a machine which may be described as having three frames (i) the front forks, (2) the main central portion, and (3) a rear frame carrying the driving wheel.

This last-mentioned unit is pivoted just behind the gear box, and is connected to the top portion of the main frame, below the saddle, by means of parallel sliding members carrying coil springs. The illustration shows the principle upon which the springing works, and from which it will be seen that the distance between the driving and driven centres (the gear box pulley and the rear wheel) varies slightly with the movement of the frame. Although this movement is not very great, it would probably be sufficient to prohibit the use of chain transmission. With belt transmission this variation of centres may largely be disregarded.

We recently tried one of these machines for several days, and immediately the added comfort of the spring frame was apparent. Ordinary road shocks are damped out, and one feels no jar when passing over "corrugated" surfaces caused by industrial vehicles.

It was on returning to a rigid frame mount that the full advantages of the Hobart spring frame were most apparent, and an inspection was made to ascertain whether the tyres were not too hard.

The particular machine we tried was the one which successfully climbed Screw Road (the hill discovered by The Motor Cycle and described in our issue for May 19th), and was fitted with one of the new 346 c.c. J. A. P. engines and a special three-speed gear box.

Both 2 3/4 h.p. J. A. P. and 2 3/4 h.p. Villiers two-stroke engines are fitted as standard to these models, and almost every reader of The Motor Cycle knows the excellent reputation enjoyed by each of these power units. As regards the machine itself,the spring frame has wonderful shock-absorbing qualities, but a fact not always realised by the designers of frame springing systems is that an excellently sprung and padded saddle is just as necessary as on a rigid frame. No car designer equips his well-sprung car with un-upholstered seats, for the main springing, if set to deal with major shocks between road surface and the dead mass of the machine, cannot be sufficiently sensitive to cushion the more delicate anatomy of the live load.

We even took the machine across country, traversing ridges and pavements, and, apart from the above criticism, it behaved in a manner that would surprise those who occasionally remark that spring frames are unnecessary.