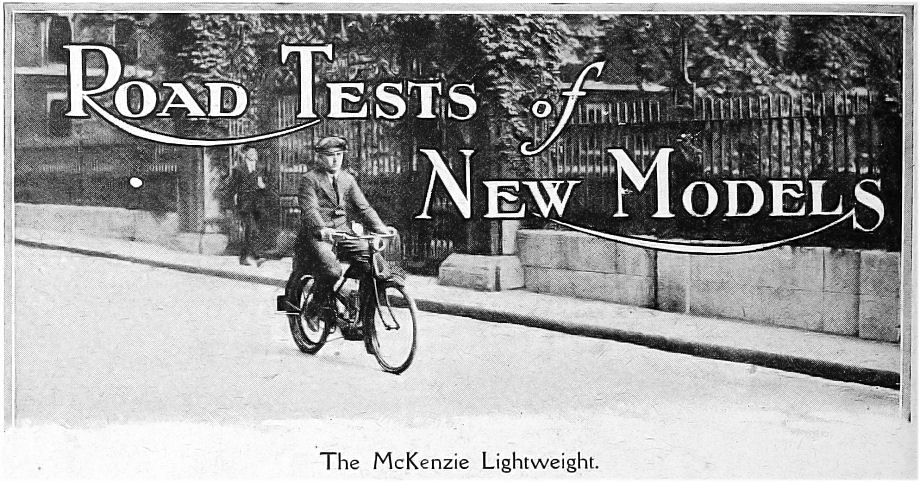 The latest McKenzie model - with a lower frame - an alternative to the now popular standard production.

THERE seems little doubt as to the rapidly increasing popularity of the ultra-lightweight motor cycle, and we therefore welcomed the opportunity of testing one of the most popular models in this class of machine - the 170. c.c. McKenzie.

Obviously this mount has been planned with considerable care and with an attention to detail which goes far to make it as satisfactory on the road as it proved to be.

In construction and driving it is simplicity itself, and anyone with even the most elementary knowledge of motor cycles need not be afraid of taking over the machine. The engine has a cubical capacity of 170 cc and is of the two-stroke type, giving very smooth running and all the speed that is required. Transmission is by a direct belt drive to a large drum on the near side of the back wheel from a pulley behind the outside flywheel on the engine shaft.

A pleasing feature of the little mount is the willingness and astonishing flexibility of the engine.

The carburetter is a Vici of the single lever type, and lubrication is effected by the petroil system. The petrol filler cap is fitted with an oil measure, and spare oil is carried in the oil tank in front of the petrol container in the usual manner, but the underside of the oil tank possesses a release tap, thus enabling oil to be drained off as required. The mixture in this case should be five measures of oil to every half gallon of petrol. The tank capacities are about three-quarters of a gallon of petrol and one quart of oil.

To try it under the conditions which the average purchaser almost certainly will use it, we decided to subject it to a few tests in thick traflSc, tests from which it emerged with flying colours. A few turns of the pedals were sufficient to start the engine, and after that, barring accidents in the way of traffic blocks and other inevitable stops, it was not found necessary to use the pedals for any purpose other than as foot-rests. With very little practice "traffic-dodging" may be reduced to a fine art with a McKenzie, as was soon discovered. The ease of manipulation and eagerness of the engine enable one to wriggle through openings which would be impossible to a less lively machine.

Satisfied that the machine was capable of doing all that was required of it in traffic, we then tried the other extreme with equally satisfactory results.

It stood up to reasonably fast work with apparent ease, and the engine appeared to be quite free from overheating. Of course it must not be imagined that great speeds can be obtained with a machine of this kind. The speed on the level is not much above 20 m.p.h., but as the machine is so light and-convenient to handle, any speed greater than this would tend to have evil effects on what can only be described as an excellent little frame; the minimum speed with the engine firing properly is somewhere in the region of 8 m.p.h.

Braking is carried out by a hand-operated rim brake on the front wheel and a singularly efficient rear brake of the back-pedalling type. We took the opportunity of testing these brakes somewhat severely and were unable to find any fault with them. They do their work well.

A certain amount of vibration is noticeable when travelling at the higher speeds, but this is almost unavoidable in machines built on such very light and simple lines; the front forks absorb all average road shock quite satisfactorily, and the saddle is comfortably sprung.

We were unable to verify the efficiency of the mud-guarding arrangements owing to an unusual spell of fine weather during the tests, but as far as can be judged from appearances it should be quite good.

The upper section of the driving belt is protected by a light metal shield which obviates any danger of one's clothes coming in contact with the belt and also protects it to a certain extent from the wet.

The frame is strongly built, the front down tube being continued in a loop under the crankcase for extra security, and the engine itself is bolted to the frame in two places.

Suitable for Riders of both Sexes.

The advantage of the McKenzie is that the frame construction makes it suitable to be ridden with almost equal ease by either sex, whilst mechanical considerations need terrify nobody. It takes up no more room than an ordinary pedal bicycle and is really remarkably light.

Altogether we were very well pleased with the performance of this machine, whether used for slow and sometimes difficult work in London traffic or for the easier and more enjoyable pastime of open country riding, reliability rather than speed, of course, being the order of the day.

The large number of McKenzies now on the road, between 1,500 and 1,600, we are informed, testifies as to its all-round utility. Recently an alternative model with a slightly lower saddle position was introduced and is intended for those who find the original model a little too high. With this latest model it is possible even for short riders to sit on the saddle with both feet firmly on the ground, a point which gives the nervous rider increased confidence.