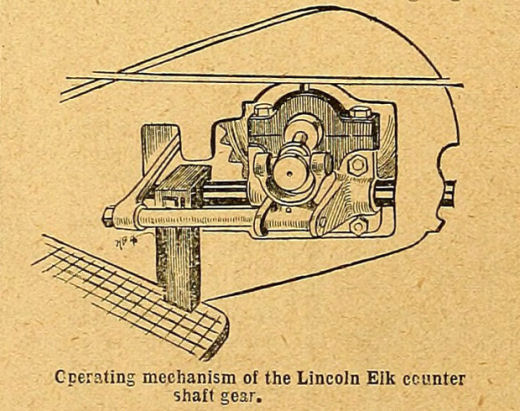 The four models specified above are all single-cylinder machines, the lightweight being the only model to which the two-speed gear, mentioned in our issue of the 21st inst. (page 1329), is not fitted. This counter-shaft is a remarkably compact design; it is driven from the engine by a chain, protected by a neat sheet aluminium cover, and on the high gear drives through a belt on the left side of the chain, on the low gear through a chain on the other side of the wheel. High and low gears are each fitted with a separate clutch, which is simplicity itself, consisting merely of a split bronze ring of good bearing surface, contracted by the operation of a side cam so as to grip tightly and transmit the power. 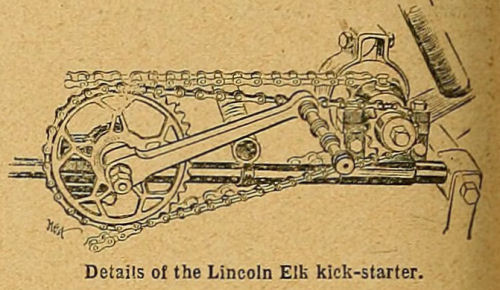 Details of the Lincoln Elk kick-starter.

As the diameters of these rings are considerably less than four inches, the clutches are very compact, and the side cams are worked by a single lever carried up the side of the tank.

A feature in the 4¼ h.p. model is the stay brought down from a point on the seat-pillar below the tank to the bridge joining the lower back wheel stays. A coachbuilt sidecar is shown in conjunction with the 3½ h.p. Lincoln-Elk, while a 4¼ h.p. machine is fitted with a new sidecar made by Bey, of Hampstead.

In this model the sidecar wheel is practically given a separate spring suspension, working as it does on the end of a lever pivoted to the sidecar axle and controlled by strong helical springs. The design is quite new, but we have not tried it.