Josiah Parkes & Sons Ltd. of Union Works, Willenhall produced a two-stroke engine of 292cc from 1918 until 1926 when manufacturing rights were acquired by Alfred Wiseman.

Enlarged Model of the Union Engine. Detachable Head and Plain Bearings Throughout.

Sectional view of the 349 c.c. Union engine showing the lubrication scheme and massive proportions of the working parts.

THE Union engine has already made a good name for itself and is now well known in the two-stroke world. A later development has recently made its appearance and takes the form of a 350 c.c. three-port two-stroke engine of very robust construction. Having a bore and stroke of 75 x 79 mm. the engine is of 349 c.c. capacity; its salient features are a one-piece crank shaft and the employment of very large plain bearings, with lubrication leads direct to the cylinder, both main bearings and through the crankshaft to the big end.

The big end is of the marine type, consisting of two bronze castings bolted to a flat connecting rod base; an extremely large outside flywheel is fitted, and the cylinder has a separate cast iron head bolted to it.

In spite of the fact that only a few of these engines are yet on the road, they are by no means experimental, for in a modified form they have been operating pumping and lighting sets for a considerable period. We are able to reproduce a power curve of a standard engine which had been running for many months continuous use previous to the test though we are informed that a similar engine has maintained 9 b.h.p. at 3,500 r.p.m. for a period of 45 minutes. The main claims for this engine are that it is particularly cool in running and is very economical and flexible; its weight is only 50 lb. 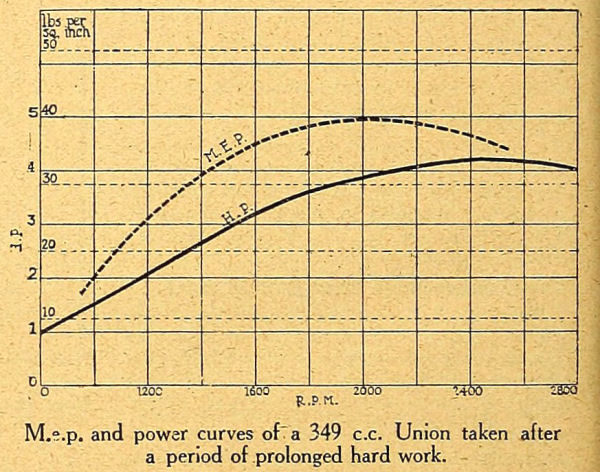 M.e.p and power curves of a 349 c.c. Union taken after a period of prolonged hard work.

On a machine which was tried by our representative, the engine proved to be capable of propelling the rider over any normal country with a top gear of 5½ to 1. It was possible to start on top gear quite comfortably and to climb a hill of 1 in 9 with the greatest of ease. A considerably higher gear might be used for solo purposes, the gear fitted being suitable for sidecar work, and with a higher gear a reasonably high road speed could have been attained in comfort. Lubrication appears to be perfectly satisfactory, and the engine two-stroked regularly over a wide range, fuel economy being a marked feature of the road running. The magneto drive may be arranged by chain in the normal fashion or may be direct from the crankshaft.