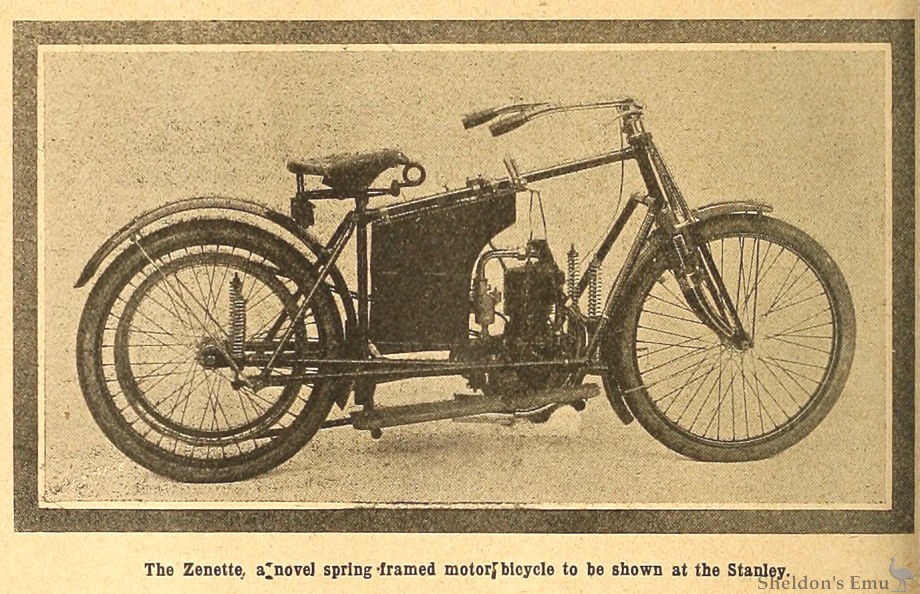 Zenette at the 1907 Stanley Show

THE ZENITH MOTORS, LTD., have introduced an entirely new type of motor bicycle, which is quite the best piece of work ever turned out from their works. It will make its appearance at the Stanley Show, and will be known as the Zenette. It is lighter, has a shorter wheelbase, and conforms a good deal more to standard motor cycle practice than the old Zenith Bicar. It is sprung on an entirely new principle, and has ordinary front forks.

The two parts of the frame are pivoted at the centre, and there is thus a scissors-like action between them. The result is that we have a most clever system of springs which is simple, unobtrusive, and not at all unsightly. It will be seen that the top tube is sloping, and this is a novel feature of the modern motor bicycle, since it is reviving a type of bicycle which was out of date many years ago. In the case of the motor bicycle, it is absolutely no disadvantage - in fact, it is a distinct advantage, since it enables the rider's seat to be placed in a very low position.

Furthermore, the tank and accumulator compartments are carried in the rear of the frame, and this allows the engine to be more accessible, far more so than in most types of machines. In the later models the rear mudguard is exceedingly wide, and is hinged about the middle, so that it may be divided when it is found necessary to repair the rear tyre.

The engine develops 3 1/4 h.p., and is provided with a simple form of spray carburetter fitted with an automatic air valve, and is controlled by varying the lift of the inlet valve and by the spark advance.

Long footboards are fitted in lieu of pedals. A trial on the machine convinced us of its excellence, the design of the frame, moreover, is distinctly good, rendering the rider as it does almost entirely immune from vibration, and the frame is at the same time splendidly balanced and most delightful to steer.

The trial was certainly a short one, but it sufficed to show the capabilities of the machine, not only from the point of view of comfort, but also from that of efficiency. At the end of the road on which the trial was made there was a hill having a gradient of approximately 1 in 12, and, although driven at it round the right-hand comer, the machine surmounted it without difficulty.

There are several good points about the method of springing which we have not yet mentioned, and which are not at once apparent. In the first place, since the engine and back wheel are attached to one member of the frame, there is no possible movement between them, and in consequence neither the alignment of the pulleys, nor yet the distance between the engine and rear pulley, can possibly be altered. This, of course, is not the case when the hinge is situated behind the engine or the seat-pillar.

Secondly, there is no possible side play, and, though all the springs work simultaneously, yet if one, or even two, are removed the action will still take place. Thirdly, the engine vibration is largely absorbed by the springs, and, lastly, the springs may be adjusted to any weight of rider or may be made suitable for any condition of road surface.

To prove the efficiency of the springing and its effect upon the wear and tear of the machine we were shown a couple of nuts - one on the rear pulley brake and the other on another part of the machine - which were purposely left quite loose, and yet never came unscrewed any further on this account.