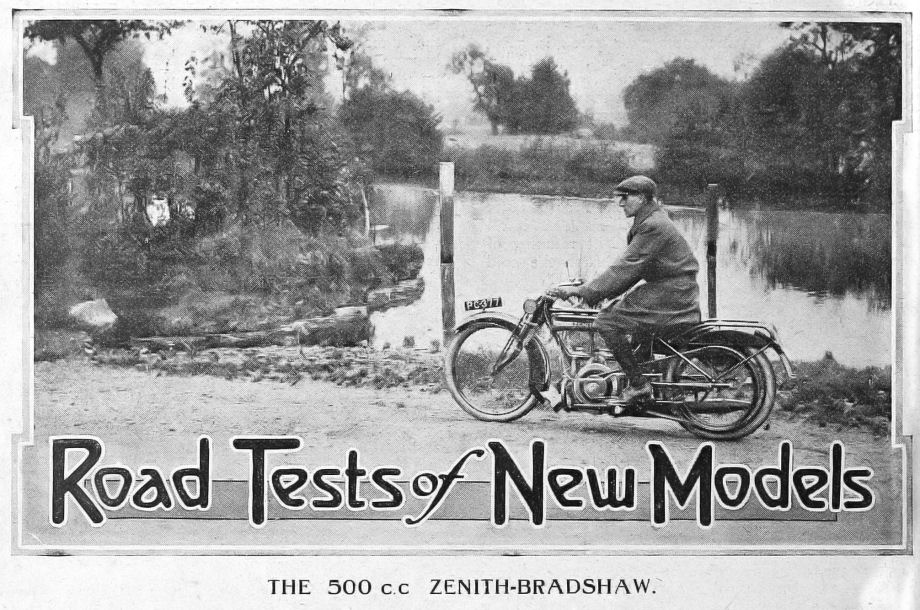 The belt transmission and the silent and smooth running engine make the flat twin Zenith-Bradshaw an ideal solo mount.

THE Bradshaw-engined model of the famous Zenith was obviously staged in a somewhat unripe condition at the 1920 Olympia, and it has only lately reached its full bloom. But a week's trial of a brand new production model shows that a notable addition has been made to the list of first-class sporting mounts. We use the word "sporting " advisedly, because no good motor cyclist is likely to affix a sidecar or even to attempt unrestricted touring with a specification which employs belt drive and is limited to a bottom gear of about 6½ to 1. Taking these limitations for granted, it would be difficult to name a more delightful machine.

Two remarkably distinctive features clamour for admiration before points common to more conventional designs are discussed. The first is the quite unusual mechanical silence. A variable pulley gear is, of course, as nearly silent as a transmission can be; in this case the silent drive is flanked by a notably quiet engine.

It would seem that oil-cooling may remove a reproach hitherto regarded as inalienable from air-cooled engines. No matter how carefully such engines have been designed and built, they have always emitted a tinny rattle, due to the resonance of a naked cylinder barrel. On water-cooled engines this resonance is dulled by the jacket. On oil-cooled engines it is damped almost out of existence by the triple barrier of the oil-mist, the air space, and the crank case. wall. A similar silence is observable with the oil-cooled engine designed by Mr. Bradshaw for the new Belsize car. In the second place, the removal of all anxiety about lubrication is a great boon. The tank top carries no excrescences except the petrol filler cap; there is no hand pump, no sight feed, no visible oil pipe, and, consequently, no green stains. The only tell-tale consists of a rise-and-fall bobbin on the crank case; this betokens the action of a simple gear pump, with which no trouble need be apprehended. Provided the rider has verified the presence of sufficient oil in the crank case before leaving home, he can ride all day without any lubricating anxieties, and that is without a doubt a big consideration.

In practice there do not appear to be any draw-backs to the new method of cooling an engine, by submerging its cylinder barrels in the crank case.

Our test engine was brand new, and it kept cool enough to meet every test we could invent to torture it, including five miles of full throttle on bottom gear ahead of a following wind. We have known a few new engines which kept cooler, but it was impossible to make it pink or pre-ignite under the most brutal treatment. Neither could a plug be induced to soot up by wild scraps up steep hills, followed by cautious descents of the reverse incline with the throttle shut. This latter test was confirmed by the fact that the oil consumption was too trivial to admit of measurement in a week, signifying that very little oil enters the combustion chambers.

The only criticisms which can be passed are that the outside of the crank case does not keep spotlessly clean, though the leakages are slow and small; and that the insides of the pistons are not easily reached for decarbonisation purposes. A much longer test would be required to verify the amount of oil which becomes charred on the interior of the pistons in prolonged running; the Zenith works experience suggests that the engine will easily run for a season before the insides of the pistons need be exposed - the engine must be taken to pieces for this to be done, though the detachable heads permit the combustion chambers to be cleansed very rapidly and easily.

On the road the machine is simply charming. It starts up instantaneously, is capable of from 5 to 65 m.p.h. on top gear, evinces splendid acceleration on the lower ratios, and runs at about 72 m.p.g. when ruthlessly "hogged," greater economy being possible at a slower speed With a 500 c.c. engine and a top gear of 3½ to 1 , speed can be obtained without resorting to high revs., and a smoother running "hogbus" would be difficult to find. If revs are utilised, as they must be up very steep hills when the bottom gear is higher than a conventional middle, no vibration arises, for the engine is well balanced. Many air-cooled engines emit a distressing mechanical scream when they are freely revved, but the crescendo of the exhaust remains the chief - indeed, almost the only - noise of the Zenith-Bradshaw, when it is being pushed.

With a 500 c.c. engine and a top gear of 3/1 to 1, speed can be obtained without resorting to high revs., and a smoother running "hogbus" would be difficult to find.

A fast machine requires good steering, good springing, and good brakes. The new Zenith frame is excellently balanced, and we could not wring the least symptom of a wobble out of it at a speed estimated at 65 m.p.h. in the absence of a positive meter. The saddle is so well insulated by the makers' special spring mounting that jars from the rear wheel are only felt on really atrocious going.

Readers who lament the decease of the old-fashioned belt-driven sports mount should not fail to examine the Zenith-Bradshaw. It offers a better performance than its predecessors with a tremendous advance in road manners and refinement, although it weighs more than they did, and has a somewhat more complicated power unit.