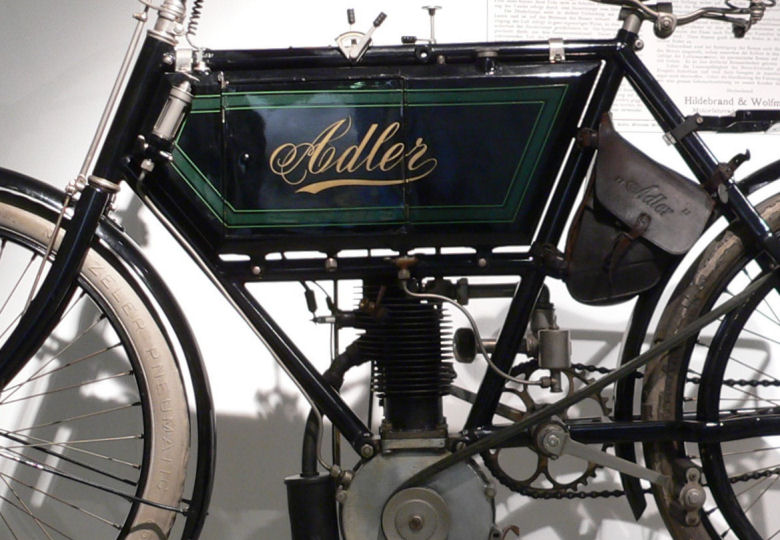 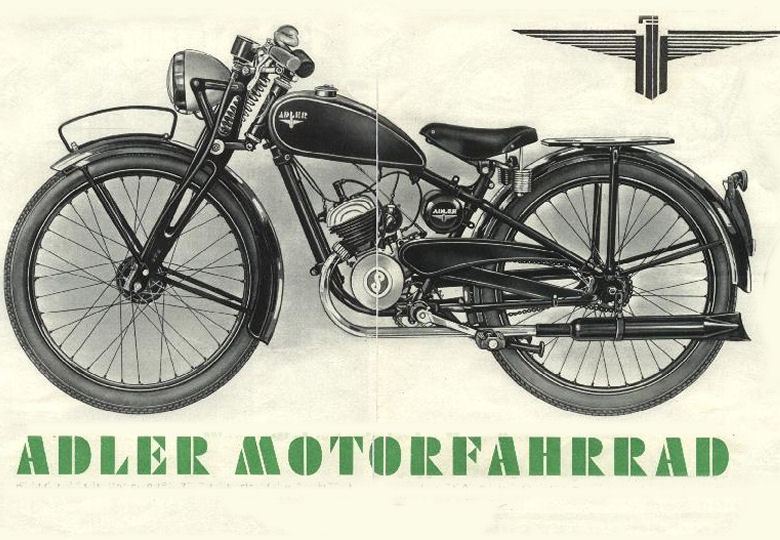 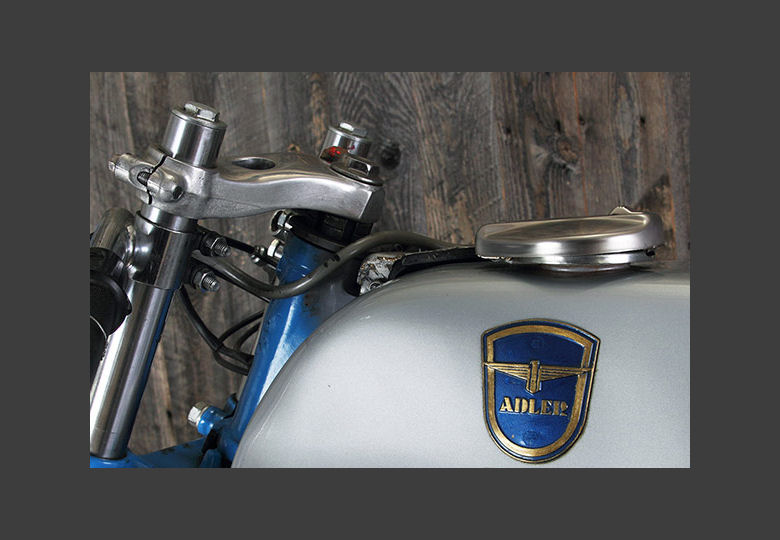 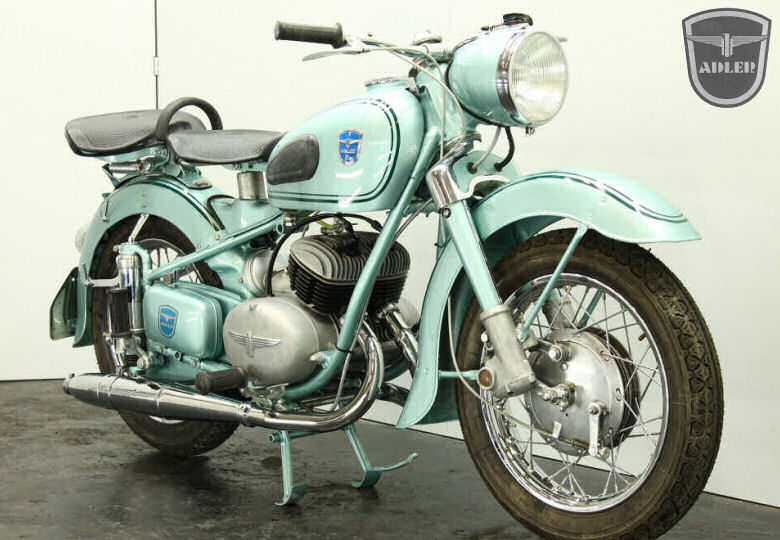 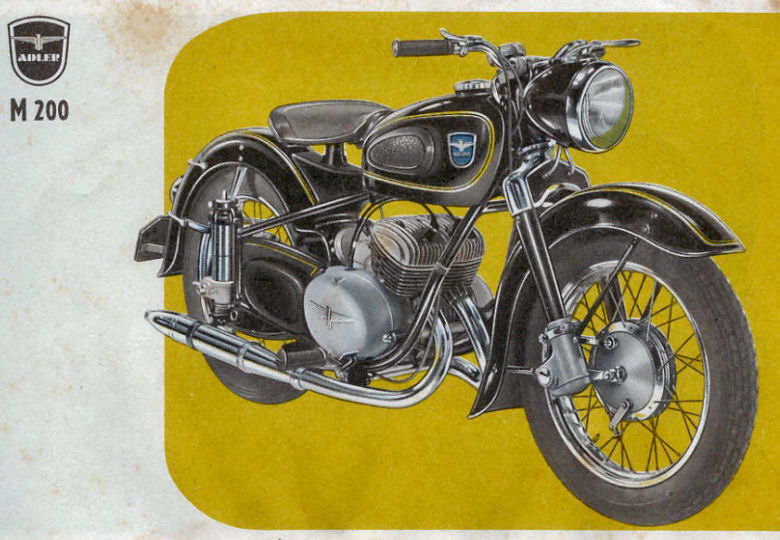 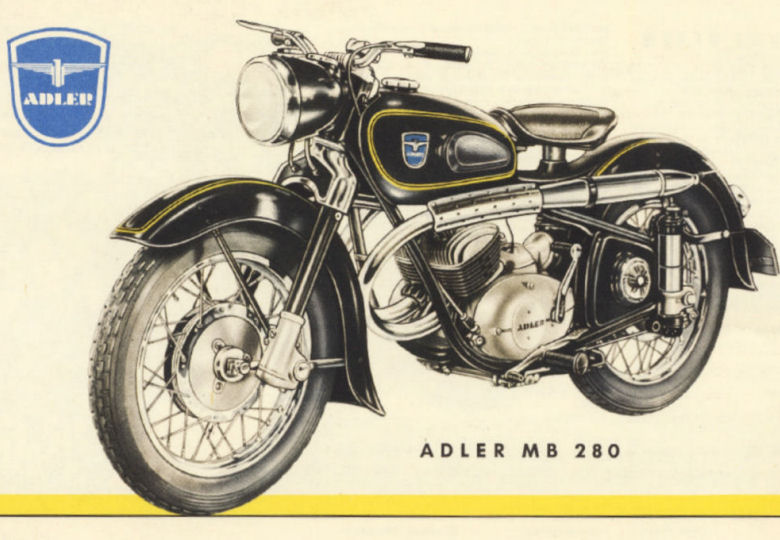 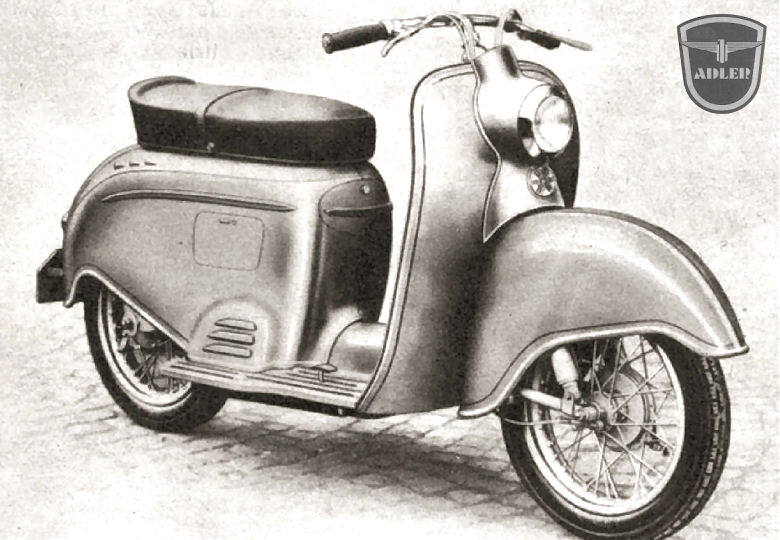 Germany 1949-1958
The Adler company built it's first vehicle in the 1870s, a tricycle, and made typewriters from 1895 which became well-known internationally..

After 1910 they ceased making motorcycles and continued with bicycles, typewriters and automobiles.

The company was notable in the thirties for their fine cars which included the Adler Autobahn, Trumpf Junior and the 2.5 litre Glaeser bodied Diplomat.

After World War II motorcycle production resumed in 1949 with a 98cc two stroke followed by improved 123cc, 147cc, 195cc and 247cc designs. The 247cc machine had a modern twin cylinder two-stroke powerplant which had some influence on early Japanese motorcycle engine design and may also have been the inspiration for the Ariel two-stroke twins.

Adler won many races with air- and water-cooled 247cc street racers, driven by Lohmann, Beer, Luttenberger, Vogel, Falk and others. Some all-terrain motorcycles like the Adler sixdays were built up to 1957.

In 1956 Adler merged with Triumph (TWN). The business was taken over by Grundig in 1957, and motorcycle production ceased in favour of office equipment, notably typewriters.

Adapted from an article submitted by Hartmut Schouwer

Sun Jan 08 2017
ms.oddny at gmail.com
Adler 98ccm Mf
I`m the owner of what I belive might be an Adler MF 2 or MF3. It looks like an Adler MF1 but max load is higher. I can`t find anything about mf 2 or mf 3 and very little about mf 1.
Hanstholm DK

What year is your machine, and have you any photos?

It`s a 1938 and max load 210 Kg, As found a Villiers 9D engine was installed. I.m in Denemark now and the bike is in Norway so the onely picture I have is as found. I found a picture of an Adler MF2 and it`s not that and propably not MF 3.

Thu Dec 03 2015
berylknowles at rocketmail.com
valuation
Adler Junior scooter
I have restored a 1956 Adler Junior Scooter. Could anyone please tell me what it would be worth. Thank you
South Australia
English

These are the only photos at the moment. We do have the side plate, just wasn't on the Adler when the photo was taken. We also have more scooters for sale most need restoring, some don't. NSU Prima's, DKW's, Rabbit Fuji's, Lambretta Lamby with sidecar, Vespa's, heaps maybe you might know of someone interested in them.
Thank you,
Beryl

Mon Jun 23 2014
richard at onebillinternet.co.uk
parts for an Adler MB250
Adler MB250
Hello, I am trying to find if there is a supplier of any Adler parts, I need a kick start return spring and a float for the 1/22 Bing carb. I would be very pleased if you can help in any way
Wymondham Norfolk

Mon Sep 05 2011
jamiemclaughlin<at>talktalk.net
adler junior parts wanted
adler junior
i am after an adler junior engine or just the barrel and piston many thanks jamie
east sussex england
English

Tue Mar 08 2011
vespamaxxlv<at>yahoo.gr
adler m 100
I bought a year ago and I made it myself
Lesvos Greece

Sun Nov 14 2010
m6.paul<at>gmaildot com
Barn found adler m250
Adler M250
How much would a barn found m250 vintage adler in 100% original condition be worth? It even has the 1950's tires.
Florida Try the page on Classic Motorcycle Valuations.

I came across this Adler Motorcycle, and was wondering if what the seller says is true, as he states that it is a 1956 Adler 350cc, and as far as I know Adler only made upto a 250, the Motorcycle is 95% all there and the seller wants £500. would you suggest I buy this Adler.

Sun Oct 18 2009
nikorovella at yahoodot com
adler scooter junior
1957 adler junior
original 800 miles in storage since 1961 just took it out and its in excellent shape...tires very nice ...the carb literally fell apart the metal is so fragile when you touch it . it crumbles rest of bike engine brakes all work good ...what is the value where can i get a carb....nikorovella at yahoo.com
usa

Sun Aug 23 2009
r.packard at hotmaildot com
value of Adler M100
Adler M100
Could you please let me know the value of this motorcycle is as I considering selling it.
Thank you,
Ron
Boston, MA Try the page on Classic Motorcycle Valuations.

Sun Jun 24 2007
ian.cheese at btinternetdot com
adler junior
adler junior 98cc
i am looking for a piston barrel and any other bits .Do you have any or do you know where i could get them from.Regards Ian
east sussex

Wed Sep 06 2006
davidcrossman at dodo.com.au
Adler Junior clutch plate
1955 Adler Junior scooter
Hello , Could you tell me if you know where I would be able to get a clutch plate for a 1955 100cc Adler Junior motor scooter , Thank You.
Try browsing the Adler directory at Bikelinks:
bikelinks.com/directory/../Adler/

Mike,
I haven't seen one of them in years. Your best bet would probably to keep an eye on e-Bay as things like that sometimes pop up. I was recently able to snag one for a British 1935 Calthorpe Ivory that I've been looking for about 10 years. I don't know of anyone selling them.

Good luck on your quest. The Adler cars and motorcycles are incredible machines.. Some of the first front-wheel-drive and I'd love to get my hands on one of the 2.5 litre cars.

Sun Oct 16 2005
littleford at hotkey.net.au
Adler motorcycles
Could you update the web address for the Australian Adler site .
It is now < adlermotorcycles.com>
Regards Don


Translation: Hello I have eagles a mb250 with that unfortunately kuzpplung does not go that can lies k?en it me tipps to give to the repair au?r the battery with running engine lies not loaded in front that

October 15, 2002
Sheldon! I just found this web site with your e-mail addy. I owned an Adler back in the 50's I have some photos at http://photos.yahoo.com/jerrschmitt(404) Look in the Kenitra folder
Jerry Schmitt -- Superior, WI -- Jakflash at aoldot com

June 26, 2002
1938 Adler Trumpf Cabriolet
I have a friend who has located an Adler automobile....
See the German Motorcycle Forum

November 13, 2001
Hello,
My father brought home an Adler back with him from WWII...
See the German Motorcycle Forum

October 12, 2001
I have a thirty-eight adler 98.cc with pedal start need parts please. -- HounddogNorton at aol.com

September 28, 2001
Dear friend,
I have just come across your web-page and saw your request for info on /about Adler. Well, the only Adler I ever saw was back in the late 50's and it was an horizontally opposed twin with plunger suspension and a separate pillion seat with a rubber grip in front of the seat. I am from Limerick in Ireland, in the 50's such bikes as the DKW, Adler, BMW, HRD etc were very rare. I used to drive a BSA A10 with a DA Side-car................ Thhhhhose were the days!!! The days of incontinent machines.
Regards
Gerard FitzGerald -- gpfitz at gofree.indigo.ie

October 14, 2000
I have a 1958 Adler Junior Scooter it runs and is complete and in good condition. Does anybody want to make me an offer. -- RICHARD YATES RICHARDG at yates33.fsnet.co.uk

May 29, 2000
I have discovered an Adler 100 in the family cellar. It belonged to the Grandfather and was last used about 30 years ago. I am trying to find more information about this machine. Any help appreciated. -- Many thanks, -- Graham Edwards. -- graham at gedwards.f9.co.uk

November 15, 1999
Hi I'm Ronny from Jakarta, Indonesia
I have a Classic motorcycle Adler 125 cc (1953), I want to know a history and all information about Adler motorcycle. Thanks a lot.... please send e-mail to me at Ronnykusuma at hotmaildot com

But don't let looks and sounds fool you, it would top end an R-50 taking half the time to do it. It was a quick little scooter and handled pretty good if my memory serves me correctly. As you can see I was pretty fond of it and don't remember any thing bad about it, maybe one thing, I took a lot kidding about my little motorcycle such as to leave it out in the rain, maybe it'll grow or hey Ron get off your knees--- until they learned what it could do.

Then it taught me a little about 2 strokes, it was the first "real' 2 stroke I'd been around, I was told that it was one of the first to have reed valves and that the Rodriguez brothers raced them, don't know if either of the last statements are correct.

I do know the brothers stated their racing on motorcycles then on to cars in the early 50s.they were from S. America, their careers didn't last long, they were both killed on the race track sometime in the 50s.

A little humor now. I figured with those big twin mufflers it had have a lot of back pressure, no I didn't take them off-I cut them off and made megaphones out of them. ruined my motorcycle, couldn't get a replacement set, I think I almost gave the bike away, it was loud, smoky and dead. But you see that was when I knew everything there was to know about motorcycles.

By the way, that was during the same time my friend had the Victoria Burgurmiester that I liked so well.
Ron Bishop -- Guzzi01 at aoldot com

Hi,
Just for info. My site is now available in german & english. Further I have a own domain name adler-oldtimer.dewill you change my entry accordingly.
Best Regards

I am looking for some help with regard to Adler cars rather than bikes, but maybe you could send in the correct direction. My father bought an Adler car in 1945 that had been in storage during the war. I would like to find out more about the cars and the company that made them.
Thanks -- Kevin O'Brien -- kfobrien at indigo.ie

June 3, 1999
Hello Adler fan, I don't know much about the Adler except that I have one. All original 1956 model, show quality. If you know any interested buyers ,have them contact me. -- stan thomas slthomas53 at hotmaildot com

January 28, 2001
Hello ,this is Stan Thomas , a friend put an add in your Adler page and after many inquires I was able to sell it. thanks for your connection. here is the picture of it that sold it. now I'm sad its gone!
Stan

Saw your website. I don't know much about Adlers, but I do know I have one under my basement stairs! It's an 1955 MB250 . It needs a lot of parts but I do intend to restore it. If you know of any one who may have some used parts please let me know. I need a tank toolbox, exhaust, handlebars, headlamp and taillamp lenses, air cleaner, complete top end, and both engine side covers just for starters.
Thanks, Matt Mattman623 at aoldot com