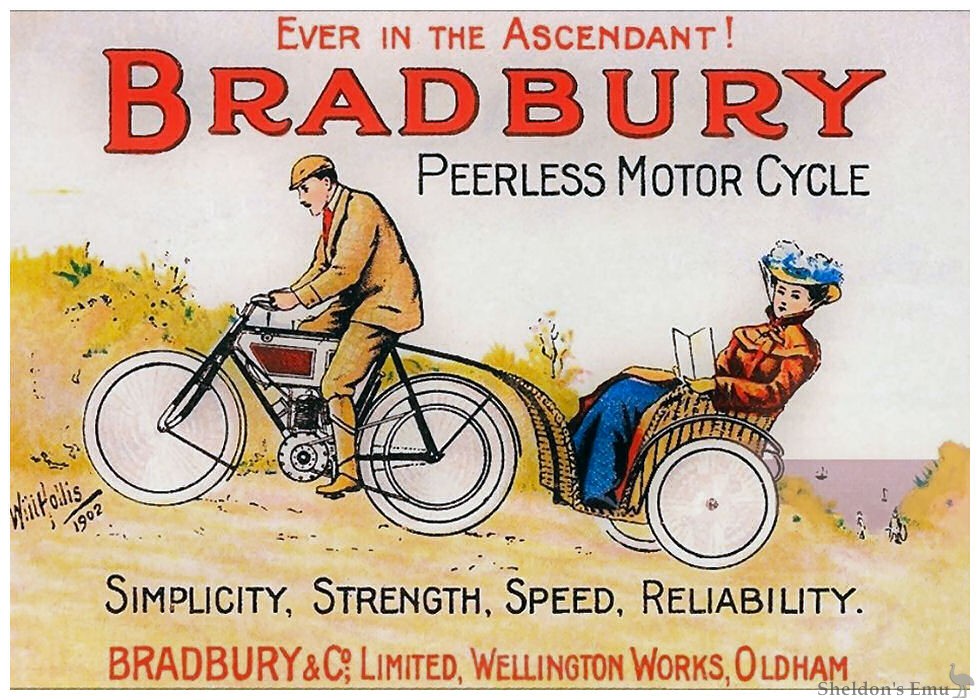 Bradbury and Co. built motorcycles from 1901 to 1924 and introduced one of the earliest forms of variable gearing, using manually adjustable pulleys.

1901 The first machines had a Minerva engine suspended from the down tube of a standard bicycle.

1902 Late that year they produced machines built to the Birch design. This had the crankcase cast around two of the main frame tubes. In other respects they were similar to the new Werner design and were fairly primitive. The principal model, listed as the Peerless, had a 2.5 hp engine. A lightweight was also listed and this had a Clement-Gerrard engine inclined above the frame down tube. It drove a counter-shaft which was mounted ahead of the bottom bracket, it then went to the rear wheel and both drives were by chain. Other than that it was no more than a heavy-duty bicycle.

Report from the 1902 Stanley Show

Stand 76. Bradbury and Co, Oldham, have in their new motor-bicycle struck out on somewhat new lines. The engine is placed vertically, and the case of the engine is a malleable casting in which the whole of the lugs and the crank bracket shell are included. Consequently the crank case of the engine can, without any fear of fracture, be used as part and parcel of the frame. The pulley side of the crank case is an aluminium plate. The cylinder dimensions are 66mm. bore by 76mm. stroke. The cylinder is cast in one piece with the head, and the silencer is placed close to the exhaust outlet. A surface carburetter is provided, but a spray is optional. A wipe contact is used with a Peto and Radford accumulator, and a trembler coil with Carpentier trembler. The positive terminal of the contact breaker has a spring behind it to keep it always up to its work.

The connections for the wiring are exceedingly simple and effective, as they are effected by spring snaps. The first movement of the exhaust valve lifting lever cuts the current. Lubrication is provided by a pump placed conveniently at the fore part of the tank, where the oil reservoir is situated. The drive is through a Lincona belt, the gearing being about seven to one. The girder front forks are particularly good. On a 2.5 h.p. machine shown there is provided an extra rear seat readily attached and detached, and carrying an extra tank, with compartments for both oil and petrol. The rear passenger places his feet on a pair of pedals provided for the purpose. A well-designed trailer is exhibited, and a motor-bicycle driven by a Clement engine with a chain drive is also shown.

1903-1908 The model continued with a few modifications and the crankcase cast to the frame. Various power outputs were available as well as a tandem backseat frame. This was a pillion seat with handlebars. There was also a forecar with a 4hp water-cooled engine and chain drive.

Report from the 1903 Stanley Show

At the Stanley Show, Bradbury and Co., Ltd., will show "Peerless" motor-bicycles. These will be fitted with 2.75 h.p. motors instead of 2.5 h.p. as formerly. Two accumulators will be fitted also an improved contact breaker, ratchet levers and many small detail improvements.

1909 Still of the same construction, but now with sprung forks, the firm standardized on a 3.5hp model - followed by transmission models.

Wellington Works, Oldham. Stand No. 81.
The Bradbury motor-bicycle is introduced in two forms for 1911 namely, the roadster and the light roadster or Tourist Trophy, the latter weighing some 301bs. less than the former. The excellent feature of using a steel crank case and making it an essential part of the frame is retained. The fitting of a cross tube below the tank is thus avoided and there is good clearance both above and below the engine. The Brown and Barlow carburetter and Bosch magneto occupy the usual positions and the former is handlebar control. Inverted levers under the handlebar operate the exhaust lifter and the front wheel brake. A low position is secured for the saddle by providing a lug behind the upper part of the diagonal tube to receive the saddle pillar.

The front fork is provided with links and springs on the parallel ruler principle. Transmission is by belt and variable pulley. The tank is held in place by cast steel clips and is fitted with a petrol filter. The rear brake is operated by a pedal mounted independently of the foot-rests, which are provided with rubber pads. The tool bag is furnished with an improved set of tools and is securely supported at the back of the carrier and sufficiently below it to give a clear platform. The roadster models are specially adapted to stand sidecar work, the lighter pattern is without pedalling gear. These excellent machines are not sold to the public direct, but to retailers only.

1913 Late that year 3.5hp flat-twin model appeared. This had its magneto mounted on top of the crankcase, a three-speed chain-driven gearbox, the choice of chain or belt final-drive and drum rear-brake.

1914 A 6hp V-twin model was added. This had a three-speed gearbox, all-chain drive and drum rear-brake.
Bradbury 1914 Models

1915 The models continued and the single was rated at 4hp.

1916 The V-twin and the single, with various transmission options, were available that year. Throughout World War I those models remained in production for service use.

The cylinder heads of the Bradbury are detachable, which enables the whole of the cylindrical part of the cylinder, including the horizontal cooling flanges, to be machined. The cylinder is then nickel plated to prevent rust. This gives it a very distinctive appearance. The valves are side by side and operated by adjustable tappets. A B. and B. carburetter is employed, and Best and Lloyd semi-automatic lubrication. The Bradbury flat twin was introduced just prior to the war, and only a limited number are in the hands of motor cyclists.

1919 After the war, that line still continued with the addition of a 2.75hp, two-speed single with chain-cum-belt drive.

1920 Just three models were available, as the 4hp single was dropped.
Bradbury 1920 Models

1923 That model was now only available with three speeds and chain drive.

1924 They were now down to just two models, both of which had been redesigned and enlarged. Early that year the firm failed and production came to a close. The stock was sold on to an ex-employee who, for some years, sold spares and built machines from those parts.