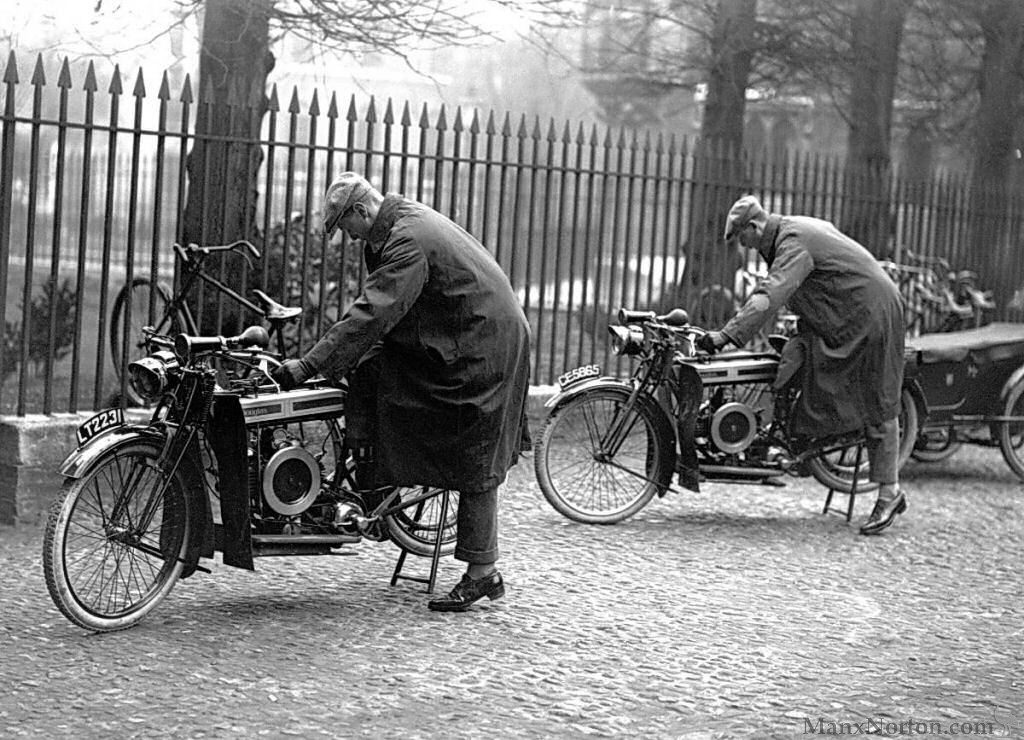 09-Mar-2021
ivanden at hotmail.com
19 May 1914
Dear Sirs,
I have been lucky to find in a spanish antiquities market an old 1914 advert for Douglas motorcycling.It is from a supplement of " Motor Cycling" dated on 19-th May 1914. I have it on the original paper, framed and protected under glass. It appears also W.Harry Bashall who rode a Douglas to victory in the T.T. kn 1912 . Pure history.It is on sale . I attach photos .
Best regards
Denisse Ivana
Spain

14-Jan-2021
desmondfmccann at hotmail.com
1925 O B
I wish to purchase a grease gun for this model. The motorcycle is a Douglas OB 600cc 1925 overhead valves this vehicle is in concours condition. .
Desmond McCann
Poole Dorset 10-Jun-2019
maggie.noble.52 at gmail.com
The attached is a photo of my Grandfather and family on an unknown make of motorcycle and sidecar in Melton Mowbray circa 1920s. I can just make out the letter D and possibly O in the manufacturers name.
Please could you advise me whether it is a Douglas model?
Margaret Noble
LINGFIELD 29-Mar-2019
pal.sue at live.co.uk
Douglas
Hi. I have a photograph of my great grand father dated 1944 in London. He is pictured sitting on a motorcycle with sidecar. (See attached) I am guessing it's a Douglas?
I also have a photograph of him and his 2 daughters taken in 1925 sitting next to his Douglas motorcycle and sidecar having a picnic.
Could you please have a look at the photographs and see if you can identify the models?
Any info appreciated. Thanks and regards Paul
Paul
London, UK Tue, 07 Nov 2017
ironhorse.64 at hotmail.com
Douglas Cw 1925

My 25 dougy once primed of oil and left for the day,drains the oil from the tank to the sump,, Any ideas? Thanks mark
Mark
Queensland Australia

According to the current edition of BMWRA's OTL magazine, this notorcycle is the last one out of the Douglas factory, and is currently in the Barber Museum, in Birmingham, AL. The link above the the picture on your website. This is the same picture used in the OTL magazine.
Englewood, CO

Mon Mar 25 2013
duketin<at>iprimus.com.au
Cycle info
douglas red devil ?
Can you supply any info on this bike for me. It has a "dixon" badge on handle bar
Australia

Tue Jul 24 2012
douglaspresotto<at>yahoo.com.br
Picture for Douglas Motorcycle
Hi, My name is Douglas Presotto and I`m a rider as actually I have a Harley Davidson. I friend of mine from Pakistan introduced Douglas Motorcycles. I gor really excited about it. So i would like to have as much pictures as possible of all styles created by Douglas Motorcycles.
Really thanks!!
Schroeder, Santa Catarina, Brazil

Hi there , Ray Elbourne here, IMCA member in Sydney, I am writing to as many people as I can to get the word out that our 1927 EW Douglas has been stolen, in Feb 2010, short version of this saga, Dad gave most of the bike to a Guy from Mittagong NSW to work on and do up, but it turned out he later sold the bike to a Collector in the local district , unfortunetly this is all we know from second hand accounts, as the Guy (Dave) has disappeared, we are pretty sure the buyer did not know it was misappropriated, I do have some pics of the bike but not a lot of use if it is in parts. If anyone you hear of, has got a newly aquired Douglas and is missing the head light, gear box and some other parts please let us know. Thanks RAY, at this email or 0408219663, and please feel free to pass this email on to all and any who would help.
Sydney, Australia

This message is also posted at dropbears.com/m/motorcycles/stolen-classics.htm

Thu Feb 28 2008
designadviser1 at hotmail dot com
Douglas vespa identification
Douglas Vespa 42l2
I am located in Sydney Australia and have a Douglas 42l2 125cc model ready for restoration. I was wanting to know what italian vespa the 42l2 was based on and what differences there were to the douglas version that i have in order to make parts finding a bit easier. For instance tecnica vespa has the VL1T (150cc) with the seat with springs at the rear of the seats (same as 42l2) but has headlight on the fender ? i think this was down to satisfy british regulations re headlight height ? But the 42l2 has the headlight in middle of handlebars like the 42l2. Then the next model change shows the italian version with a different seat (no springs) but the handbar headlights ?? I am confused. Basically is the douglas a bit of a mix of the italian versions of 1955/56 ??
I believe the rear taillight is also round as opposed to the square italian version ?
As it is a 125cc what engine does it resemble so that i can get replacement parts ??? Does anyone have pics of an original 42l2 model ?
Signed..... desperate
Sydney Australia

Fri Apr 11 2008
marvik at maltanet.net
douglas dragonfly piston and rings
douglas dragonfly 1956/7
hi i am Anthony Busuttil and i live in Malta isl i need to buy some parts for my motorcycle i need two piston +30 with rings can some of you members help please thanks tony
Malta

Tue Dec 04 2007
jean-pierre-morf at wanadoo.fr
looking for Engine
MKV 1953
I'm looking for an engine for a douglas MKV. please contact me if you have an engine. Regards
France

Mon Oct 15 2007
Douglas parts wanted
CW and EW Douglas
Im looking for a Tank for my 1926 CW Douglas and my 1927 EW. Also looking for a complete or parts of flywheel cluches for both bikes. Also after brake drums and parts for the EW. Please contact me on gmack123 at yahoo.com.au
Australia

Thu Jul 05 2007
davidapitt at yahoo.co.uk
identifing a frame
douglas t35sport 1947
The bike is in bits ,frame no T35S6516S with an S on its side under the numbers. its 1947 trying to fit parts toolbox etc ,no brackets. Have been told it may be a factory racing machine by the frame numbers,i need to find out what it is before i can carry on with the rebuild. any help, imformation on its history would be good.

Sat Apr 07 2007
webby.stash at gmail dot com
douglas H3
I been asked to make an offer for a douglas can you give me a guideline value for a douglas h3 1930 that's been restored and looks really nice?
india

Thu Dec 07 2006
hardcase at clear.net.nz
WHAT YEAR IS IT?
Should have taken a closer look.
I recently visited my friend who is a curator of the Southland Museum in Invercargill New Zealand and noticed they had on display a Douglas Motor cycle with sidecar in immaculate condition.They indicated it was a 1940s model but I was sure by the look of it that it was circa 1930. The side car was Zeppelin shaped and a lever poked out of a slit right in the middle of the petrol tank which was very wedged shaped like something from the 1920's. I don't seem to see any pictures of such a machine with this lever poking through the tank. I would think that this alone would date the machine.I would be greatful if one of your experts could GIVE ME A CLUE AS TO WHAT VINTAGE THIS DOUGLAS MOTORCYCLE REALLY IS AND and any misleading representation can be corrected by the Museum Staff. Thank You Edward Case...Dunedin New Zealand.

Tue Sep 12 2006
bevandalan at aol dot com
cables
vespa douglas 150 vba1t
i am trying to obtain a new set of cables for my vespa, but when i ask for cables for a 1958 vespa douglas 150 the expert suppliers say its not enough information and need to know what model it is ie,px,pk etc, can anyone advise ,thanks
isle of wight

Fri Jun 02 2006
brynstudio at sentex.net
Parts Wanted
1924 Douglas CW
I am searching for N.O.S. or reproduction pistons and rings, front rim with brake and assembly and seat with front spring. If you have any info on where to find these items, please call or email anytime if you have anything available. Thank you. Bryn Gladding
Canada
.....
here are a couple [of photos], most douglas owners will know the bike as it is quite common. thanks for your help.
regards, bryn

Sun Mar 12 2006
BREWTEEK10 at BLUEYONDER.CO.UK
desperatly require a servicable 90+ frame and forks plus front wheel, due to head on with a wall

Mon Feb 27 2006
crash100-00 at hotmail dot com
I have a 1930 T6 douglas in parts all good condition and was wondering of it would be worth restoring for resale.
Norfolk, England

February 2nd 2005
Good photo of early Douglas on Ebay.
Vendor's Description:
The Douglas Engineering Company was founded in Bristol England by brothers William and Edward in 1882. First they were a blacksmiths shop, but soon expanded to become ironfounders. After the turn of the century with the start of the motor vehicles they soon became involved in the development of engines. The Douglas motorcycle began in 1905 as a prototype engine by Joseph Barter which by 1907 had evolved to become the Fairy Motorcycle. 1914 saw production in large quantities for the war effort and also the start of the 3.5 HP models followed closely by the 4 HP machines. During the twenties many others followed such as the 350cc EW, 500cc and 600cc models and speedway machines. In the thirties a wide range of machines were produced including the S6/T6, Endeavour and finally the pre-war Aero models.

January 5th 2005
Here is a nice article on Douglas dirttrackers

September 15, 2002
I have an engine which is thought to be a Douglas but I cannot find any pictures on the net of bikes with a similar engine. I guess it is 1930's but I have not found any markings on it yet.

Description:
Horizontally opposed side valve, bore about 60mm, stroke? Could be a 350 or 500cc fore and aft fitting in the frame, large finned oil tank in unit with the engine.
Part of a chain guard seems to be cast in alloy with the left side of the crank case, large 12" by 1" external fly wheel, alloy pistons (seized).
The (spark) plugs screw vertically upwards into small chambers which have a small opening to the combustion chamber - there is a dynamo drive and platform with two studs to hold the dynamo to the top of the crankcase.
The timing chest cover has cast in air intakes leading to the inlet valves and fed by a single carb which feeds air and fuel upwards into the air intakes.
The exhaust ports face down & there are two alloy covers over the tappets.
The timing cover and oil tank seem completely different to all the Douglas engines I have seen.

I would like to know what machine it came from and any other details or is it a stationary engine from WW2 or even another make of engine?

Any help would be appreciated.

August 6, 2002
Here is an excerpt of text that describes the Douglas in your pictures:

The last model made was the advanced and novel 350cc Dragonfly, in 1955. Distinctive looks and good handling couldn't hide the low top speed (75 mph, although a sports model claimed 84mph) and poor low-rev performance. A 500cc prototype was shown in 1951, but never made.

Hope this helps. All correspondence to be sent to takeda at alphalink.com.au regards Michael