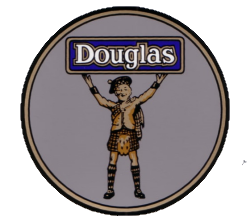 After World War II Douglas was in financial difficulty and reduced its output to the 350 cc flat twin models. The opposed twin had been the Douglas trademark since 1906 and had a long history of Isle of Man TT racing successes.

The Dragonfly was known as the Dart while in development and was based on the Mark V Douglas and an earlier 500 cc prototype. Aiming to overcome the outdated image, designers were commissioned from the Reynolds Tube Company to develop a completely new open duplex frame of welded tubing, including a swinging arm with twin Girling dampers (state of the art for the time) with leading link front suspension. The strengthened and streamlined 348 cc engine had a modern coil ignition AC generator and distributor, with bolt-through cast iron cylinders and heads and duralumin pushrods.

The launch of the Dragonfly was the last chance of survival for the Douglas company when it featured at the 1954 Earls Court motorcycle show in a big display held in a giant micrometer. Although it aroused a lot of interest, Douglas' finances did not allow them to exploit demand and the Dragonfly did not go into volume production for nine months.

As well as production delays, the Dragonfly was bigger and heavier than its predecessors but no more powerful. It was also noisy and acceleration was sedate. Douglas decided to concentrate on importing Vespa scooters which were increasing in popularity and only 1,600 Dragonfly motorcycles were built. The Westinghouse Brake and Signal Co bought Douglas out and production of Douglas Motorcycles ended in 1957.

If you have a query about about this page, or have some information to add, please contact us!