Two-stroke engine details are always interesting, and we are now enabled to publish a detailed description of the Connaught single-cylinder engine made by the Bordesley Engineering Co., Ltd., Birmingham, and shown on the stand of the Service Co. at the Olympia Motor Cycle Show. The cylinder is of the three-port type, and one of the most notable points is that the ports are situated only in the front and rear walls, so that the side pressure of the piston, due to the angularity of the connecting rod, is utilised to keep the piston tight over the ports in spite of any wear. To this end the inlet and exhaust ports are arranged one immediately over the other, and this is shown clearly in the appended diagrammatic section of the complete engine. 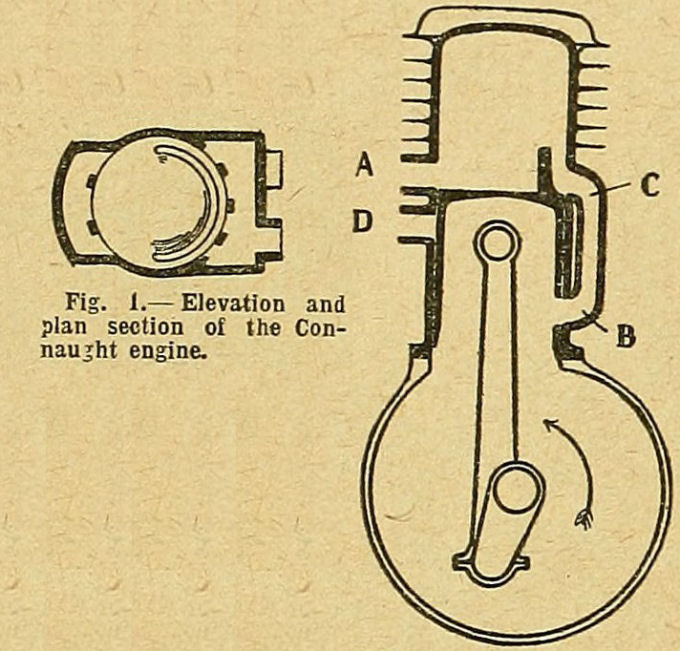 Fig. 1. Elevation and plan section of the Connaught engine.

The piston is shown nearing the bottom of the stroke, having already opened the exhaust port A. A second port B, which acts as a transfer port in conjunction with the third port C, has also been opened - by means of a port which is cut in wall of the piston. The vacuum or suction in the crank case induces the fresh gas, and this occurs when the piston rises and uncovers the inlet port D, thus bringing the carburetter into communication with the crank case. Immediately the piston descends on the power stroke, the inlet port is closed.

It will be at once realised that a great benefit accrues from the close juxtaposition of the inlet and exhaust ports, which are, in fact, contained in the same box cast on to the side of the cylinder, since the cool incoming gas tends to keep the temperature down in the neighbourhood of the exhaust. It will be noticed that the piston is furnished with the usual deflector head, which extends semi-circularly round the piston as indicated. 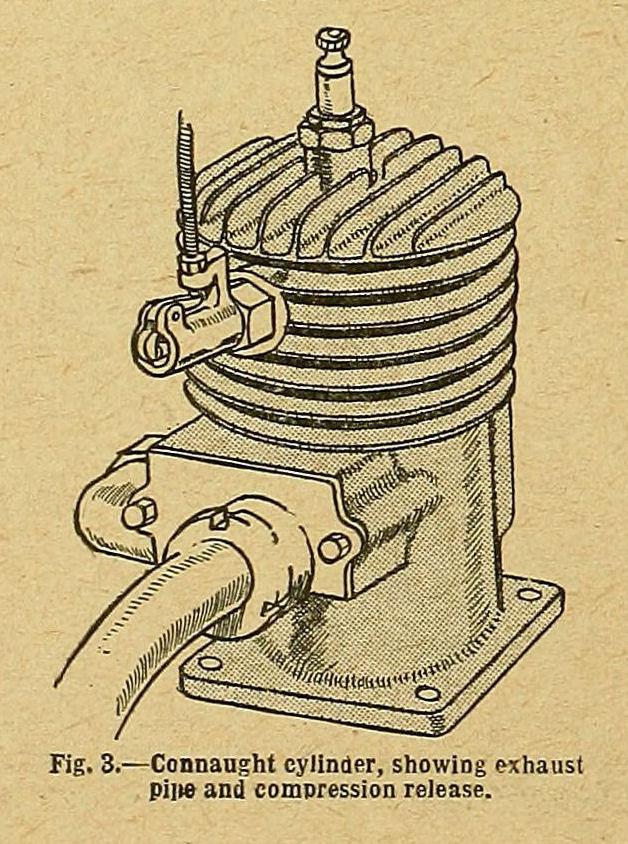 The sketch also shows the extreme width of the ports, this giving a very rapid cut-off, and at the same time providing very large apertures for the gas to pass through.

The second illustration shows how the ports are arranged so as to lie close underneath one another, whilst the third sketch shows clearly the cylinder and port box, and the attachment of the exhaust pipe, the inlet pipe being placed at the side. From this sketch it will be noticed that the sparking plug is placed in the centre of the cylinder head, and that the compression release valve, which is operated by a Bowden lever from the handle-bar, is at the side. 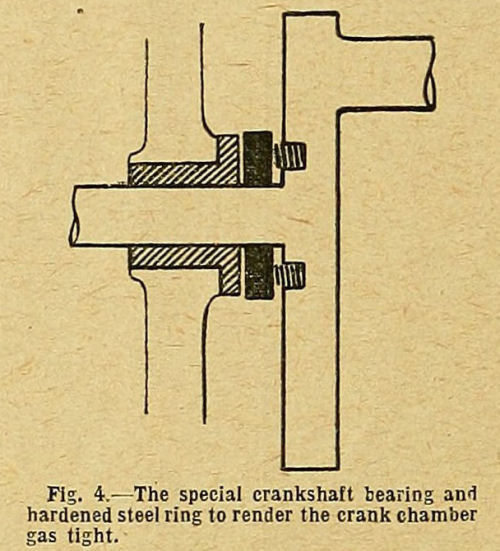 The fourth sketch is a section of the crankshaft, which is given to illustrate the manner in which the crank chamber is kept gas-tight. The gunmetal crankshaft bush is indicated by diagonal shading. Against this bears a hardened and ground steel ring (shown black), which is made an exceedingly good fit on the shaft, and is held against the sides of the bush by a circle of small springs let into the crank webs. 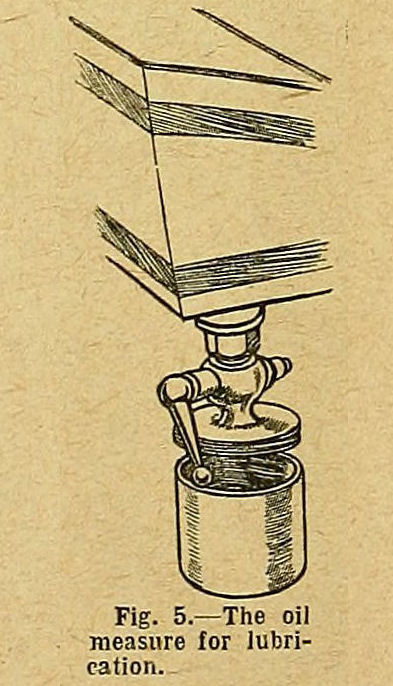 Fig. 5. The oil measure for lubrication.

A large outside flywheel is fitted, and enables the engine to revolve at very slow speeds. The method of lubrication adopted is simplicity itself, and follows the practice which has now become standard on two-stroke engines in the United States, viz., the admixture of a suitable quantity of oil with the petrol. The oil is kept in a separate compartment of the petrol tank, and the correct quantity is measured into the petrol when the latter is replenished, with aid of a small cup, which is screwed to a specially made tap on the oil [?] (see sketch). The proportion of oil is one-sixteenth of a pint to every gallon of petrol. The cylinder is offset.