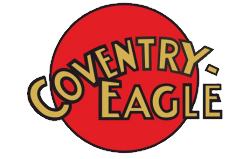 One of the few machines of this size (654 c.c.) the 5-6 h.p. Coventry Eagle, which answers admirably as a double-purpose mount.

The new internal V brake applied to all models. Two brakes, both acting on the rear wheel, are a feature of the new design. The sketch shows the toggle mechanism of the new band brake.

Two brakes, both acting on the rear wheel, are a feature of the new design. The sketch shows the toggle mechanism of the new band brake.

Mediumweight Twin for Solo or Sidecar use. Rigid or Spring Frame at Option.

A REPUTATION for sound work and pleasing appearance has been built up by both the 3½ h.p. and light-weight models of the Coventry Eagle motor cycles. For 1921 a new type has been added to the existing range, and this appears likely to sustain the reputation of this Coventry firm. Fitted with a twin-cylinder 5-5 h.p. J.A.P. engine of []mm. and 85 mm. bore and stroke respectively, the transmission is by chain and belt through a three-speed Sturmey-Archer countershaft gear. There are no very startling innovations on the standard machine, except for the fact that there will be no front wheel brake, but in lieu an excellent band brake will be fitted to the rear wheel.

In addition to this, the usual Coventry Eagle belt rim brake has been replaced by a new type acting on the inside of the V, so as not to interfere with the detachability of the wheel. This brake is progressive in action, the lower part of the shoe being arranged to come into engagement with the rim before the remainder of the braking surface which is delayed by the action of a light spring.

Brampton Biflex forks, excellent mud-guards, and sensible footboards are included in the specification, and the general appearance is extremely pleasing.

A remarkably simple form of spring frame will be offered as an alternative to the rigid frame on all the larger Coventry Eagle models. Carried on the rear portion of the frame is a pair of substantial bell cranks mounted on ball bearings. The levers carrying the rear wheel normally form extensions to the chain stays, while the remaining levers of the cranks hang downwards in an approximately vertical position.

These vertical levers are attached to an enclosed tension spring anchored at the front to the foremost part of the chain stays, and two "buffer" springs are interposed - one inside the spring case and one outside. One or other of these buffers is always in compression, and, consequently, helps to damp any violent shocks.

It should be pointed out that the ball bearings on which the bell cranks pivot are entirely enclosed and packed with grease to prevent the ingress of water or dust. This spring frame has already undergone extensive road tests, and has proved eminently satisfactory. We are informed that the alteration of belt tension due to the action of the wheel has no appreciable effect either on belt slip or wear, and we are looking forward to a road test at an early opportunity.

In addition to the 5-6 h.p. model, the manufactures will retain the 3½ h.p. King Dick, 2¾ h.p. J.A.P., and 2½ h.p. Villiers-engined models, which will be fitted with brakes as described above. With these exceptions, only detail alterations have taken place, as existing types have proved so satisfactory.