POTTED HISTORY OF THE FRANCIS-BARNETT

Herewith another reprint - this time from a 1954 Bulletin. The authentic pictures are by courtesy of G. S. Davison. Last month's correspondent, Mr. C. Tyler, gets his wish granted by return,-J.K.

Messrs. Francis & Barnett, of Lower Ford Street, Coventry, are, by Vintage standards, a modem make. The firm was founded shortly after the 1914/18 war, when Captain Gordon Francis, a son of Graham Francis, who with R. H. Lea had founded the old Lea-Francis concern in 1895, started up with his father-in-law, Arthur Barnett, who had been a director of the old Singer Company and more recently the Invicta concern, who made a few lightweight motorcycles as an adjunct to their pedal cycles. They obtained factory space in Lower Ford Street, which had been devoted to munitions during the war, but had originally been part of the Hillman works, and later had housed Bayliss-Thomas when they produced the first Excelsior. (The fact that I have mentioned six firms so far may give you some idea what Harold Karslake was up against when chronicling the industry). Here they started to produce a straightforward motor-cycle of good design and performance. A lightweight which was not a scaled down version of something bigger, which would form a stepping stone to something better. They had no crank ideas, no vast racing programme (though the name appeared regularly in every branch of the sport), but sold the kind of bike the ordinary sort of chap could afford to buy, and having bought, could have the sort of fun or get the sort of service he expected from it.

Their history, as successful manufacturers, would be of interest for that reason alone, but they have produced some extraordinarily interesting machines betimes. Yes, and modelled their entire range round them if they sold, or dropped them just as quickly if they did not. Built cheap by correlation of design and production, rather than made cheap by reason of material or workmanship, The industry would do well to take a lesson from their Vintage years in the testing time ahead. 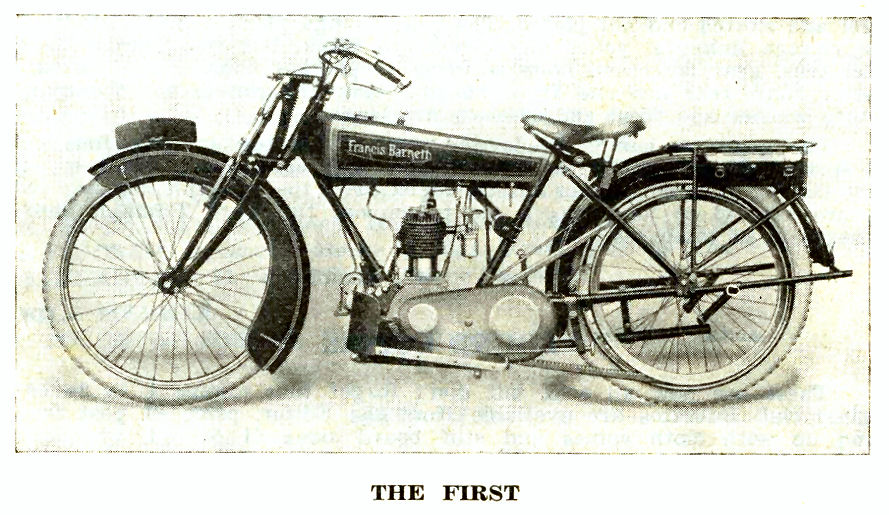 1920 The first Francis Barnett was announced in March of this year, and had a conventional diamond-type frame fitted with the then current 293 c.c. (70 x 76) side valve J.A.P. engine (optimistically rated as 22 h.p., to rank with the 350 c.c. class) and driving via a Sturmey-Archer two-speed gear-box, with the primary chain fully enclosed in an aluminium case, and belt drive to the rear wheel. A pleasant semi-saddle type tank, finished in red with black panels, covered the straight sloping top tube, with the control cables led from the bars inside its rounded nose. The detail work was good, such features as a hand adjuster for the rear brake being noteworthy. Accessories were C.A.V. magneto, B. & B. carburettor, Brampton Biflex forks (sprung top links), and so on. Weight, 195 lbs. Price, a reasonable post-war 84 guineas.

1921 For the Show at the end of the previous year, the J.A.P. engined job was continued, and the firm started their long association with Villiers, with a h.p. two-stroke, either single geared or with the two-speed box plus clutch. The single geared job weighed but 152 lbs. Tanks were black, lined with red, this year.

In April of 1921 a,n overhead valve edition of the J.A.P. engined job was produced, though it did not go into production. It had exposed push rods operating valves set vertically in the head, and boasted an Amac carburettor, Webb internal expanding front brake, and a central stand operated by a hand lever. The firm claimed that so well was the machine balanced on the stand that the weight of an overcoat on either end would raise the other end. "The Motor Cycle" road tested the job to do 50, which was quite something; and naively remarked that the flexible tubing of the straight-through exhaust deadened the note, though it had not the resonance of copper tubing. Happy days.

1922 An additional model with the 350 c.c. side valve J.A.P. engine, driving via a three-speed box with gear lever mounted on it. Saved a lot of trouble when adjusting one's primary chain. Accessories by B. & B., and M.L., footrests in place of footboards, all black finish, and a total weight of 190 lbs. There was a cheaper edition of the two-stroke as well, with a non-saddle type tank slung beneath the top tube.

In the Isle of Man, R. W. Loughton rode one of the J.A.P. engined jobs, fitted with a 246 c.c. side-valve T.T. engine, and finished in quite a creditable tenth place in the Lightweight at over 40 m.p.h.

1923 Quite an important year. As far back as July the previous year the customers had started asking for chain drive on the 293 c.c. job and the wretched firm had given in. Now they dropped all belt drive editions, and organised a new two-piece chain guard. You could have the 346 c.c. job in three forms: Standard with footboards and legshields, Sports with footrests (£2 cheaper), and a special T.T. edition with no kick starter, but a grey and mauve finish. Very pansy. A 250 c.c. engine was an alternative on this last one. A sidecar was listed for the other two.

The really important introduction for 1923 was the little 147 c.c. Villiers engined job with the Gordon Francis designed, triangulated and bolted-up, straight tube frame. Introduced in February, it had a very simple specification, with Mills single lever carburettor, Albion two-speed gear with belt drive, C-spring forks (hence both brakes on the belt rim), 24x2 tyres, petroil lubrication to the three-port type 55x62 two-stroke engine, and a weight of 100 lbs. Two fitters were timed to build one up complete in 20 minutes. The price was £27. An interesting point in connection with the frame was that the steering head rotated about a fixed spindle, using the same cup-and-cone bearings as were used in the hubs. The perfect triangulation of the frame gave rise to the slogan "Built like a Bridge."

The last T.T. entry was T. G. Meeten's in this year's Ultra-Lightweight race, with a 175 c.c. Blackburne engine in the triangulated frame, but where you usually find the gear-box, the latter being mounted in front. The odd little job finished 6th, too.

A month before the T.T. a Francis Barnett appeared in the Grand Prix de Lyons with a 172 c.c. Villiers engine in the triangulated frame, and chain drive via a three-speed box. Following its success in the Scottish Six Days we started to holler, and it was officially listed in August, the frame being slightly altered to take the chain drive. The 57 x 67 engine had a fixed iron head, two exhaust ports, and drip-feed lubrication from an oil compartment in the wedge-shaped fuel tank. There was a neat jockey-sprocket on the underside of the rear chain to take up slack, and you could have a Senspray carburettor. The Scottish jobs, and the first of the production jobs, had additional steel strips from the steering head to the front of the crankcase. Windy about whether it was the Tay Bridge they were built like, we said. 1925 Only the two-strokes, the 147 costing £27 and the 172 £38. There were agents handling only F.-B. too, rather like the Raleigh set-up. You could get a rubber block to go in the C-spring of the forks, and a proprietary steering damper, but you still could not have a front brake. Not with those forks, 1926 At the Show at the end of the previous year, there was a Super Sports edition of the 172, with detachable aluminium head (iron piston), and you could have "Oxford Bags" exhausts, too - sort of trousers-shaped expansion chambers directly on the ports.

In place of the Villiers engine, a 175 c.c. side-valve Aza (made by J.A.P.) was proposed, but, though it was at the Show, it did not go into production, which means to me that we did not want to buy it enough.

A heavier edition of the same frame, widened to 16" at the bottom to take a 346 c.c. J.A.P. engine, was listed again, with parallel action front forks which allowed an internal expanding front brake by Webb to be fitted.

During the year a slim young man blushing to the name of J. J. Hall broke 11 world's records on an F.-B. fitted with a little Aza two-stroke of 124 c.c. (50.5x62), a size specially made for the German market, whereon it had taxation concessions. It was reputed to have an aluminium piston and transfer via a hollow gudgeon pin. But it did 40 for three hours, and later the same year a 98 c.c. edition of the same engine propelled the same "you should see him now" to another 15 records in its class, about 4 m.p.h, slower than the 124. 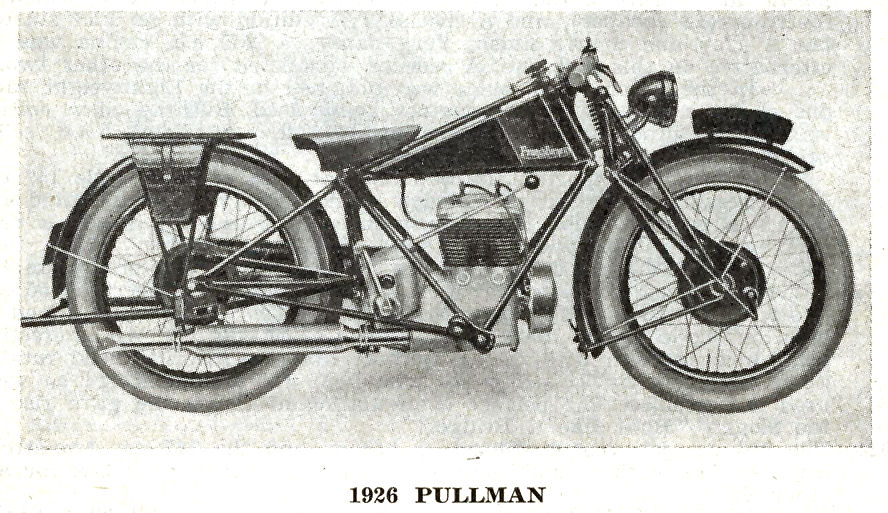 1927 Belt drive as an alternative for the 147 was finally dropped, and the Super Sports edition of the 172 had (and probably needed) a steering damper. Also curved exhausts to rearward silencers, and a pressure oiling system utilising crankcase compression piped to the oil compartment of the wedge shaped fuel tank, also an aluminium piston.

Something of a sensation was caused by the new 350, for it was to be fitted with a vertical in-line twin two-stroke, by Villiers, made exclusively for F.-B. The triangulated frame was retained, with a conical rounded-front tank, and internal expanding brakes front and rear. The 344 c.c. (57x67) engine was built on car lines, and with handlebar control for the flywheel magneto at last. But the Pullman, as it was called, was not yet ready for production.

The same year, J. W. Moxon, riding a 172, was a member of the British team in the International Six Days Trial, which was quite something, and did not happen just because they liked his face.

1928 The Pullman finally went into production this year, with a straightsided tank rather like the 172, and internal expanding brakes. The 172 itself had link action forks which allowed internal expanding brakes, too - yes, a brake on the front wheel at last. The 147 had a long plated exhaust in place of that little cylindrical silencer across the front of the crankcase, and a new gear-box by Albion with the layshaft behind the mainshaft, and the lever on the box.

1929 Saddle tanks for all models, black with orange panels we were told. But we wanted cream panels like the other maker's new jobs, and you know what happened when we hollered for chain drive in '23, for the 172 engine in '24, etc. The Pullman was withdrawn for "further development work" and the frame used for the new Empire model, with the 247 c.c. Villiers engine with detachable head, sloping forward parallel with the front down tubes. The new saddle tank (with cream panels) was recessed to take a special broad-nosed saddle, and the 172 had a separate oil tank for the pressurised system, under the saddle. It and the 250 had tankside "gate" gear changes mounted up forward. A listed extra was a twist-grip. During the year a 196 c.c. edition of the fixed-head 172 c.c. model was introduced.

1930 Direct lighting had been standardised throughout the range for a while, and one could now have a Westinghouse rectifier with it. Spring-up stands on all models, too. A new edition of the 196 c.c. engine with detachable aluminium head, and performance in keeping with a larger edition of the popular Super Sports 172, made its bow. The tankside gear lever was lengthened and lay alongside the tank, working up and down in the gate, while the saddle was recessed rather more deeply into the tank (with cream panels) on all models, and one could have the wheels in a special finish (to match the tank panels).

1931 Yes, they still make a motor-cycle. A.M.C. own a controlling interest, but how else can one ensure continuity of management policy with death duties at their present rate?

More on the History of Francis-Barnett

If you have a query about about this page, or have some information to add, please contact us