The bike is a twin port two stroke model fitted with the separate aluminium cylinder head type motor, held on by only three bolts, two exhaust stubs and petroil lubrication. 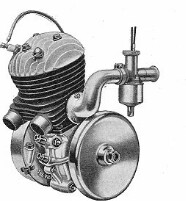 All had detachable heads, a deflector topped piston fitted with inertia ring and either fixed or variable ignition. An outside flywheel was fitted to some models. They were made from 1934 to 1940.