Report from the 1902 Stanley Show

The other model has a 2.5 h.p. Minerva motor fitted on to a special frame. This machine has a surface carburetter, extra powerful brake work, and the special spoking of the wheels call for attention. The finish of both machines is very handsome, the rims being nickelled, with green lacquered centres and edges. 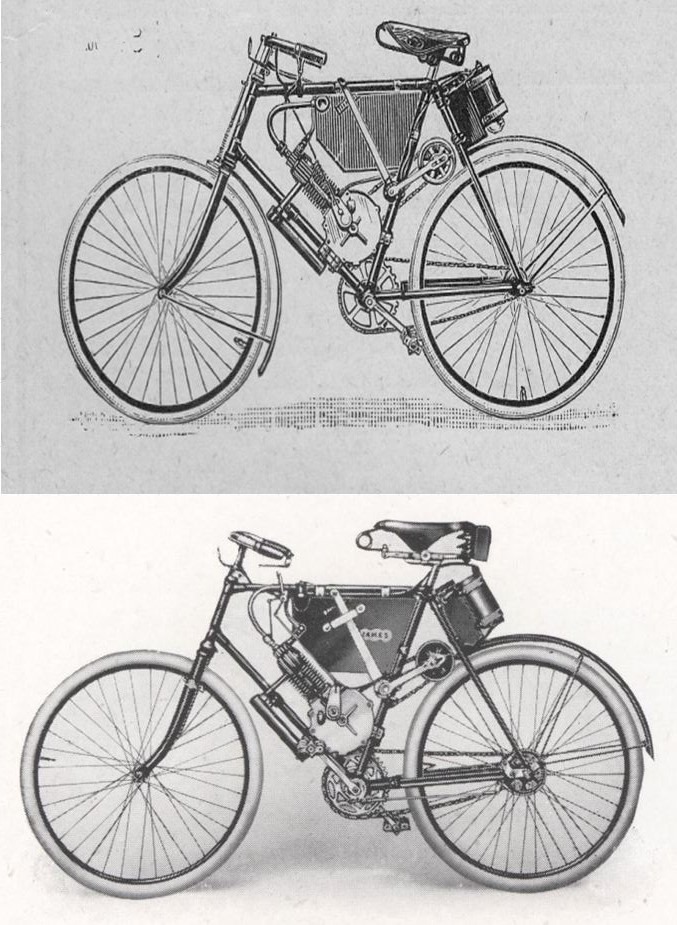 Delin and the James Derby

The James history written by A.E. Kimberly in 1950 says: "In 1902 James secured from Delin a supply of Derby engines which were fitted to his cycles and drove the machine through a friction pulley onto the rear tyre and so was the prototype of today's auxiliary engines."

(It seems that Automoto absorbed Delin, and the James Derby model does not appear to have continued after 1902.)

1908 saw the introduction of a most unconventional machine, the James "Safety" Model with hub centre steering. Designed by P. L. Renouf it was built in the firm's new factory in Gough Road, Greet, it was very advanced for the day, with quickly detachable (QD) wheels and internal expanding drum brakes front and rear. Despite the innovative features - or perhaps because of them - the model did not prove popular with the public and was withdrawn after only three years

James Cycle Co., Ltd.
The James open-frame motor-cycle, which will be shown on this stand, and whilst during the last season has been very successful, will be improved in several instances, additions being made by an all-spring frame and a multiple disc free-engine clutch. In addition to the patented open-frame motor-cycle, the James Co. will be offering a motor-cycle built on standard lines fitting the same engine as in their higher-priced model. It will retail at £48.

Report from the 1910 Stanley Show

The James motor-cycle was one of the biggest novelties at the last Show, and it is safe to predict that few will attend this without inspecting the exhibit. The open frame, which permits access to and replacement of a tyre without disturbing the wheel, is one of its chief features, and the addition of springing throughout, together with a multiple disc clutch, will still further enhance its reputation. In addition, a machine of standard design, fitted with the same engine, is included, the outcome of representations made to the company by riders who recognised the speedy qualities of the James engine, but who desired a machine built on conventional lines.

The new model is a workmanlike mount, and at £48 should find a number of buyers. It is offered in both the Tourist and T.T. types.

The 1911 catalogue listed the Model 1 and Model 2 "Safety" Motor Cycle with a 3½ h.p. engine and hub centre steering.

1912 saw the appearance of a more conventional 4¼ hp 557cc machine. The fins were staggered at 90 degrees, giving rise to the term "pineapple fins". The Model 2 was available with a Villiers hub clutch, the Model 3 with a Sturmey Archer hub.