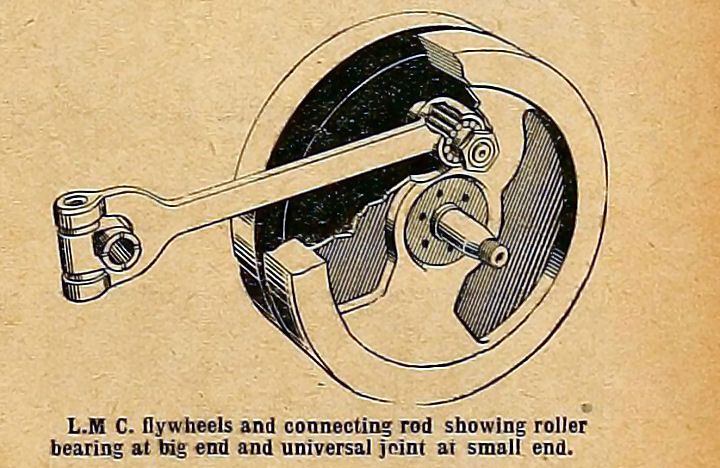 The model chosen for description made its first public appearance in the A.C.U. six days' trials, where it gained a gold medal. Most of the' features of the L.M.C. are still retained, that is to say, the engine is unaltered except for adjustable tappets. The silencer lies in front, and the rider's legs are protected from the exhaust gases by a neat cover. Sprung footboards are used, and the principle of the L.M.C. spring fork is retained; this, however, has undergone some improvement. In addition to previous descriptions, one other new feature of this engine consists of a decompressor which is operated by a small lever on the tank. This provides particularly easy starting and slow running. The L.M.C. two-speed gear was described in a recent issue, and it is only, necessary to remind our readers that the high gear is by belt direct and the low by chain. The front fork is now fitted with a special spring which takes both thrust and rebound strains, and is pivoted on plain bearings. 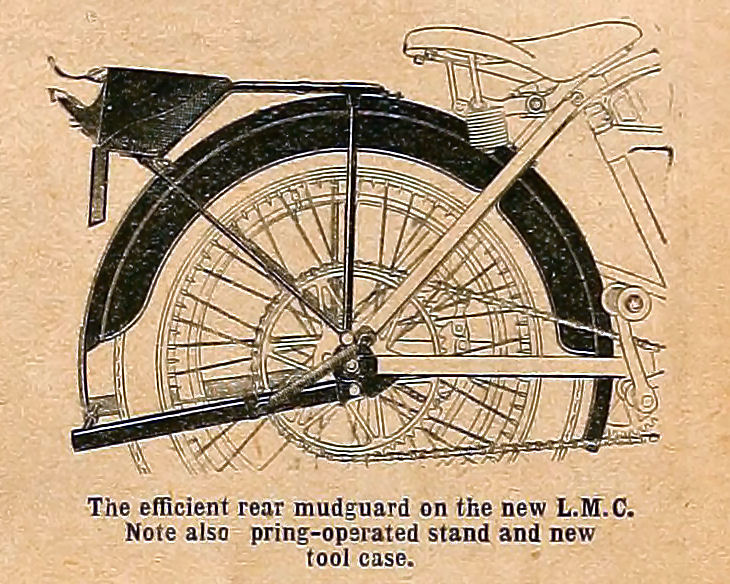 The mud-guarding has received special attention. The rear part of the rear guard, together with the carrier, is readily detachable to facilitate tyre repairs. A neat and simple kick-starter is fitted on a counter-shaft, a pedal being fitted on each side so as to form an additional footrest. The carrier is of unusual shape, and has a sloping rear portion which carries a toolbag of considerable dimensions. This is so arranged that the top of the bag lies flush with the carrier and provides ample luggage accommodation. Both foot and hand brakes act on the rear belt rim, being placed one below and one above the rear chain stay.

This model resembles the 3½ h.p. in nearly all particulars, but a Sturmey-Archer gear is fitted and the well-known L.M.C. footboard starter, by means of which the engine is revolved by depressing the rear end of the footboard. A similar model is shown fitted with the Roc two-speed gear.