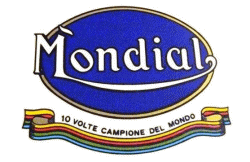 As did Gilera and Moto Guzzi, Mondial withdrew from the road-racing World Championship after 1957. Mondial nevertheless wanted to remain active in the sporting field and turned increasingly to off-road competition, principally the International Six Days Trial, as a means of keeping its name in the public eye. In 1958 they entered the ISDT, a series of speed trials over rough terrain, with the Mondial 175 Regolarità. The first event was the Trofeo Reda in Bergamo.

The machine had a stronger forks, a vertical shock absorber with external coil springs in the rear, higher handlebars, raised mudguards and exhausts, knobby tyres and a sturdy saddle.

Two versions appeared in 1959, the F.B. Mondial Regolarità 175 and the Regolarità 235. The machine had a dust filter on the carburettor, and a quickly detachable tank and a folding kick-starter were added. The tyre sizes were enlarged, a reinforced frame and steering head were fitted, and the rear swinging arm was shortened to enhance off-road handling.