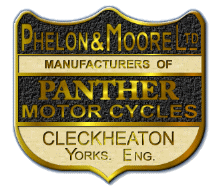 Panther were motorcycles produced between 1904 and 1968.

The company began in Cleckheaton, Yorkshire, as Phelon and Moore.

The P. and M. Panther has undergone considerable modification since last year, the principal alterations being enumerated as follow. Dunlop cord three inch tyres are standard, as are Webb forks with integral shock absorbers and special handlebar clips, enabling the stein to be dispensed with. The exhaust pipe is now brought out at right angles to the cylinder head, giving increased power, better petrol consumption, and a cooler engine. The gear control has been simplified, and internal expanding brakes are now fitted to both wheels, those at the rear being eight inches in diameter. A decompressor is fitted, and the magneto coupling has been modified to allow of easy alteration of the timing. The price remains the same as before, £75.

A modified Panther, to be known as the Cub, is to be marketed during the coming season. It has... smaller mudguards, and a silencer which conforms to Brooklands regulations... The side-valve model remains unaltered, except as to price, which has been reduced to £70.