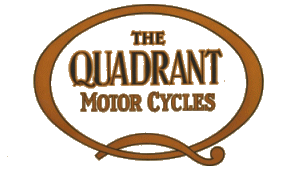 The new single-cylinder Quadrant sidecar machine, the chief feature of which is the all enclosed chain-drive. It is a particularly well finished turn out.

THE most notable alteration to the new design Quadrant is the fitting of the B.S.A. counter-shaft three-speed gear combined with kick starter. This gear is controlled by a lever, which is attached to the bottom tube on the right-hand side of the tank, and the clutch is operated by the right foot. The drive is by means of an enclosed chain from the engine to the counter-shaft, thence by belt over a large pulley on the left, while on the right is a dummy belt rim in the V of which works the rear brake. All- chain transmission may be obtained to order.

The frame has been lengthened to accommodate the gear, the Quadrant spring forks are retained, and the rear stays and forks made detachable. The engine is rated at 5 h.p., and external cams are used, a separate timing wheel being used for the operation of each valve. The inlet valve timing wheel drives direct on to the magneto wheel.

An excellent point is the provision of a split rear spindle to enable easy withdrawal of the back wheel so that a tube may be readily replaced. As will be seen in the illustration a Senspray carburetter is fitted, and the magneto is very snugly housed behind the crank case, which is most distinctive in appearance. The tank is supplied with special liners supporting it on all sides, to which the fixing bolts are attached. The magneto control lever is placed on the left of the tank, and the makers have decided to rely upon the hand pump for lubrication purposes. The footboards are of aluminium, raised in front. The inlet valve, instead of being beside the exhaust, is separated from it by about 90°, and lies behind the cylinder.

Both sides of the new two-stroke Quadrant.

The Quadrant two-stroke engine. The exhaust valve and its special heat radiating cap will be noted.

Long-stroke and a Mechanical Exhaust Valve.

THE name of Quadrant has of recent years been associated chiefly with machines of considerable size, the big 4 h.p. single having earned a particularly good name for sidecar work. Consequently, it is interesting to note that the latest model to be added to. the Quadrant list is a comparatively light two-stroke. The engine incorporates two unusual features, for its long stroke of 100 mm. against a bore of 70 mm. is distinctly uncommon in two-stroke design; while the most striking departure from standard practice is the fitting of a mechanically operated exhaust valve, which is timed to close at such a period as will prevent the escape of the incoming charge by way of the exhaust port.

In construction, the engine is somewhat similar to the usual type of three-port two-stroke, except that the exhaust port is set relatively high up as regards the piston travel. After passing through the usual port, the exhaust gases are controlled by the action of a mushroom exhaust valve operated by a cam on the crankshaft; thus on the upstroke the valve is timed to close before the incoming charge has time to pass out and so be wasted.

The lubrication is on the well principle, oil being fed from a sight feed drip to a well formed in the top of the crank case casting. Into this well the piston dips at the bottom of the stroke and carries oil up the cylinder walls. The surplus flows through ducts to the main shaft bearings, and thence through the drilled crankshaft to the big end. All bearings are plain, except for an additional ball race on the driving side.

Behind the crank case a Dixie magneto is mounted and driven by a train of gears from the crankshaft, The arrangement of cylinder fins gives a distinctive appearance to the engine, and the exhaust valve cap is fitted with a copper cooling device, though experiments are being carried out with water-cooling for the exhaust port, as it is believed that this may increase the efficiency of the engine. The frame is a sound straightforward piece of work, and the fittings, which include Quadrant spring forks, excellent mudguards, and stout stand and carrier, are well carried out. 26in. x 2in. wheels are fitted.

The big 4½ h.p. single-cylinder engine remains much as before, but the cycle to which it is fitted now carries a B.S.A. three-speed counter-shaft gear, and the chain drive is thoroughly enclosed throughout. The black finish of the machine is very handsome, and, with a comfortable sidecar, forms a most attractive proposition at a strictly moderate price.