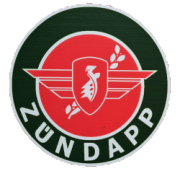 Zundapp was founded in 1917 by Dr. Fritz Neumeyer and Friedruch Krupp to produce munitions. In 1919 Neumeyer became sole owner and began production of motorcycles.

Advertisements of the day proclaimed that their motorcycles were "Motorrades fur jedermann," motorcycles for everyone, and was applied to their first motorcycle, the Z22 of 1921. It was apparently based on the British Levis which Neumeyer had seen at the London motor show of 1920.

The penchant for British design continued when in 1930 Zundapp introduced its Python 500cc, built under licence to Rudge and bearing the same configuration as that company's Python engines - 4 stroke, four-valve OHV singles.

In 1932 the Küchen-designed 600cc boxer cardan twin came off the drawing board.

Examples include BMW, Zundapp and Velocette LE Cardan drive eliminates chain and associated mess and maintenance. Often referred to as a "diff", the final drive unit consists of bevel crown and pinion gears.

By 1938 Zundapp had produced more than 200,000 motorcycles. During World War II, Zundapp continued to build motorcycles for the German military.

Twin-cylinder KS750 military sidecar combinations were designed in 1939, and entered service with the Wehrmacht in 1940 with several components being engineered by BMW including the final drive, wheels and hydraulic brakes. The engine, which appears horizontally opposed, is actually a very wide angle V4 of 170 degrees, the cylinders raised by 5 degrees to increase ground clearance. Over 18,000 of these were manufactured up until the end of the war.

In 1951 Zundapp decided to take a look at the scooter craze sweeping Italy. After designing a few prototypes based on some of the more popular Italian designs, Zundapp created its own scooter.

The Bella is not as curvaceous as the Vespa or Lambretta scooters of the day, but the elegant design did catch the eye of the critcs at the 1953 Frankfurt show.

Characterized by a very large front fender with a slim rear end and a tubular motorcycle-like frame, the Bella had strong resemblence to the Moto Parilla Levrier scooter. The Bella had large 12-inch wheels and was originaly produced in only a 150cc model. Later a 200cc model was released which boasted 10hp.

The End of Zundapp

After the Bella, Zundapp made the Roller 50 and RS50 scooters, much smaller than the Bella. These scooters, which were very similar to the Lambretta of the day, were made until 1984.

In 1984 and 1985, Zundapp began to experience severe financial troubles and as a result, the entire stock and factory was sold to a company in Tianjin, China.

Some of the information above above is unverified.